‘You come off the mountain a different person’ 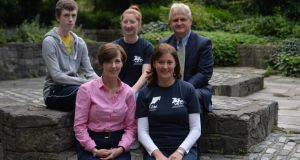 Earlier this year, five Irish teenagers suffering from scoliosis took on Mount Kilimanjaro, in Tanzania. “I remember when I was in hospital last year, I could hardly walk. I’d hear of people going off to a concert and I’d think to be able to do that would seem like a miracle,” says Kevin McGrath (18) from Limerick, who has scoliosis.

One year after his operation, McGrath found himself climbing Mount Kilimanjaro with four other teenagers who also have the condition which curves the spine.

The curve can be mild, moderate or severe, and can affect any part of the spine. The most common places are the chest area (thoracic scoliosis) or the lower back (lumbar scoliosis). It can be a debilitating condition because it reduces lung capacity, puts extra pressure on the heart and can restrict physical activities.

The signs and symptoms often start just before puberty, but McGrath didn’t notice until he was 16. Then he realised that one of his sides was more slanted than the other. He had surgery a year later and while many people with scoliosis experience ongoing pain, McGrath is one of the few who does not.

When he received an email from Dr Padraig Sheeran, dean of the Royal College of Surgeons in Ireland’s (RCSI’s) faculty of sports and exercise medicine, asking if he’d like to take part in an expedition to climb Kilimanjaro with his peers in August, he jumped at the chance. McGrath was the only teenager from the Republic to take part in the Kilimanjaro Achievers trip, an Irish not-for-profit organisation that brings people of all ages and abilities to climb the African peak.

The project involved months of intensive training before tackling the 5,895m peak. McGrath trained on Carrantuohill and the Wicklow mountains with his father, while his four counterparts in the North tackled the Mourne Mountains.

“We picked people who were a year post-surgery as being the most free of complications,” says Sheeran. “We put together a cardiovascular training session and focused a lot on hill work. The training mirrored the expedition.”

Along with Sheeran, physiotherapist Alison Quinn of the Rehab Rooms also played a big part in preparing the young people for their trip. “We carried out clinical testing which gave me a rough [idea of the] level of their fitness and then we added in other components of fitness; we did balance, strength and flexibility testing and we were then able to give them tailored programmes,” says Quinn. “When we started taking some of the kids on the mountains, we were using poles, but they started to get muscle spasms because the muscles weren’t used to working in this manner. But as time went by, the problems became less and less, and physical activity was a key part of that,” says Sheeran.

For the trip, there were six doctors with the five teenagers: Naoimh Murphy, Rose Dalton, sisters Jessica and Holly Cowden, and McGrath, reflecting the fact that the condition more commonly affects girls than boys.

“Climbing Kilimanjaro is all about the top two inches, not giving up and being determined,” says Sheeran.

Reaching the top was a dream come true for members of the group. “Before we started the trip, I felt really intimidated, really nervous and anxious,” says Jessica Cowden (15) from Antrim. “I didn’t think I’d even make it to day two, I never thought I’d reach the top. Summit night was really long, really tiring but when I got to the top, it felt amazing. I had worked so hard for six months.”

HPV vaccine: A complete guide to immunising daughters and sons
6

Looking for a new frock? Here's why you should rent, not buy
8