Candida auris is highly infectious, resistant to many anti-fungal drugs and has a mortality rate of 60% if it gets into the bloodstream 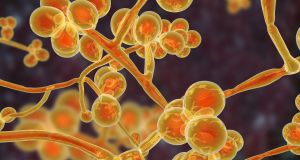 Of the three main groups of microorganisms, which do you think would be the most enjoyable to share a night out with? Why, fungi, of course.

Bad jokes aside, bacteria and viruses are generally considered more dangerous than fungi. Yeasts, with their positive uses in baking and brewing, have a more benign reputation. Although the many women who suffer from the yeast infection that causes vaginal thrush might not agree. However, in general this type of infection is rarely dangerous.

But that has all changed now. The emergence of a new strain of infectious yeast, called Candida auris, has the scientific and medical communities rattled.

Cases of C. auris remain relatively rare, according to Canadian infectious diseases physician Dr Isaac Bogoch. But he says the fungus has three main features that make it worrisome to healthcare professionals: some laboratories are unable to identify the microorganism; it can be hard to treat when it invades the bloodstream; and it is frequently resistant to one or more classes of anti-fungal drugs.

First identified in the ear of a Japanese patient in 2009 (hence its name – auris is the Latin for ear), the yeast is more dangerous than its more common cousin Candida albicans, which remains treatable with a range of anti-fungal drugs. Unlike C. albicans infections, which present in moist areas like the skin in the genital area and in the mouth, C. auris infections are usually found in the urinary and respiratory tract. They are also much more likely to invade the bloodstream.

When C. auris gets into the bloodstream, it has a mortality rate approaching 60 per cent. This is partly because the infection is resistant to most drugs but also because it is mainly found in hospital patients who are already sick – the immunocompromised, older patients with urinary catheters in situ or those who have recently undergone surgery.

According to the US Centres for Disease Control and Prevention (CDC) , more than 90 per cent of C. auris infections are resistant to at least one anti-fungal drug, while 30 per cent are resistant to two or more major drugs. In addition, once the fungus enters a hospital or nursing home, it is difficult to eradicate. Unlike some other microorganisms, C. auris forms dry biofilms, meaning it can live on in hospital rooms after the patient with the infection has left. The bug can be found on bed railings, mattresses and lockers, ready to infect the next occupant.

Another feature of C. auris that has experts spooked is they do not know where the organism came from. The bugs that cause human infections are frequently already present in animals or in plants; however, so far, with distinct outbreaks in North and South America, Asia and Europe, when fungi from the different regions were genetically profiled, they were all different. This is so far removed from the usual traceable transmission of infection as to cause real alarm. Scientists urgently want to find out where C. auris emerged from and where in nature it is hiding.

The first large outbreak in Europe involved 72 cases in London’s Royal Brompton hospital in 2015-16. No cases of C. auris have yet been recorded in Ireland.

In an unsettling replay of the development of drug-resistant bacteria, which stemmed from the overuse of antibiotics in humans and farm animals, some experts believe there is a link between the emergence of resistant fungi and the spraying of antifungal agents on crops to prevent agricultural plants from rotting.

And in a further twist, there is growing concern the emergence of C. auris is linked to global warning. Our normal body temperature of 37ºC prevents most fungal species from replicating. But C. auris’s genome shows it has adapted to higher temperatures, allowing it to replicate in humans. As our ambient temperatures rise, the fungus will flourish.

Sounds apocalyptic? Maybe, but it’s definitely one to watch.