What’s the science behind 10,000 steps and can you walk to fitness with your FitBit? 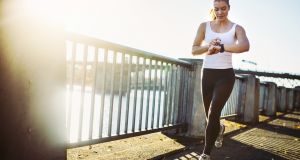 “The new iPhones, FitBits and Apple watches do work to challenge you personally, but it’s all about doing the same as your peers, and not trying to match what Sonia O’Sullivan does on a daily basis.”

If you are walking on the spot while reading this as you try to reach your goal of 10,000 steps today, then maybe it’s time to pull up a seat.

As public health messages go, the concept of aiming for 10,000 steps to increase health and fitness each day has to be up there with the most popular. Ask a group of people what they should be aiming for every day and many will respond with that magic number. This is despite it not being an official recommendation by any Irish health organisation or government body.

But it has certainly captured the imagination and, with smartphones silently tracking your every move, it’s easier than ever to know just how many steps you have taken. If you have a FitBit, then you are one of 29 million registered users worldwide.

In fact, 10,000 steps adds up to about five miles or 8km a day, and is reasonably achievable for most of us. But isn’t it a bit arbitrary? Should a reasonably fit 33-year-old woman and an overweight middle-aged man with high blood pressure and diabetes both really be reaching for the same Holy Grail daily? Is it just a nice round number? Or does medical evidence back it up?

The idea of taking 10,000 steps has its origins in a marketing slogan used during the 1964 Tokyo Olympics. An athletic company had released a pedometer called manpo-kei, which means “10,000 step meter” – a clever and practical name, as 10,000 is a Japanese counting unit. Fast-forward over half a century, however, and some people are running up and down the stairs five minutes before midnight in a desperate bid to reach their daily steps goal.

Irish physical activity guidelines for adults aged between 18 and 64 are to get at least 30 minutes a day of moderate activity five days a week, or 150 minutes a week. Counting steps can certainly help towards this.

Evidence to support the number – somewhat unsurprisingly, considering its less than scientific origins – is pretty vague. A 2011 review of relevant research studies concluded that “no study to date has systematically evaluated dose-response effects of different steps/day goals”, meaning that the effects on health and fitness of taking 10,000 steps a day, positive or otherwise, have not been proved clinically.

Several research studies have shown it to help in reducing blood pressure and diabetes among previously sedentary populations. Yet another study stated that while it may help people to achieve current physical activity guidelines, it may also lead to an “obsessive attitude towards exercise”.

But what do the experts think? We asked a GP, a respiratory medicine specialist and a qualified sports scientist what their thoughts are on 10,000 steps as a health and fitness goal for all.

Galway GP Liam Glynn is also a senior lecturer in general practice at NUI Galway where his research interests are focused on bringing technological solutions to healthcare through connected health.

He says that the goal of 10,000 steps is “potentially arbitrary” but is hugely effective in terms of changing people’s behaviour in a bid to increase overall physical activity.

“There is huge awareness out there about how useful walking is as an intervention,” he says. “It’s so cheap, it’s readily available, and it’s so inexpensive in terms of the individual and the health service. We know that in knee arthritis, an hour of exercise a week decreases disability by 50 per cent. Along with other lifestyle interventions, it decreases the development of diabetes by 48 per cent. We know it’s the best treatment for fatigue, and also the best treatment from a large meta-analysis of trials for anxiety.

“We know that, worldwide, physical activity levels are decreasing and obesity levels are increasing. The message isn’t getting through, but when you are trying to change behaviour, goal-setting gives people something to aim for.

“So while it is arbitrary, I can guarantee that if we got everyone doing their 10,000 steps a day it would make a huge difference to the health of the nation.

Consultant in respiratory medicine at the Mater hospital, Prof Sean Gaine, also happens to be the chief medical officer for the Irish Olympic Team. He says the goal is to encourage physical activity at every level, but cautions that the goal may be too high and lead to people being excluded.

“A number that can seem like a mountain for one person and a standard number of daily steps for another person, isn’t really the best public health message. That’s a very valid concern. The bigger message is that these step approaches are becoming very popular, and they are best done with your peers, where you all want to get to a level of fitness together. Having a mentor or buddy to engage in physical activity with you is important, as doing these things on your own can be quite difficult.

“The new iPhones, FitBits and Apple watches do work to challenge you personally, but it’s all about doing the same as your peers, and not trying to match what [former athlete] Sonia O’Sullivan does on a daily basis. I wouldn’t like to see the goal of 10,000 steps becoming elitist but it is good to monitor what you do.”

Sports coach Kevin Croke has a degree in sports science and health, and has worked with the Dublin and Laois GAA teams and the  Leinster rugby team. According to Croke, the 10,000 steps goal is fundamentally flawed and a “cookie cutter” standard that cannot be applied to everyone.

“I don’t encourage or endorse it personally,” he says. “It sets an extremely low challenge although it may have a place with populations for whom . . . intense activity is not medically possible.

“In general, intensity drives adaptation; if we want someone to have a positive health adaptation, the intensity must be, reasonably, beyond their comfort zone. Walking will quickly become too low a stimulus to drive positive adaptation so it’s short-term good, but long-term bad.

“If you factor in that you can typically hit 3,000-5,000 steps as a part of daily routine, unless very inactive, then the additional ‘effort’ required is reduced to about 5,000 steps or maybe two miles of extra walking. To put this in perspective, my young kids and I routinely walk one mile to and from our local shop without exceptional effort or fatigue.

“The steps approach is too narrow a focus for physical health, as it is entirely possible that someone can hit 10,000 steps and still be physically inept. The goal of being active should be that we make the most of the physical potential of the human body. Low-intensity short-distance walking does not do this.”