Why is May the peak month for suicides? 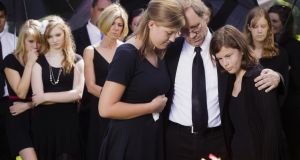 One important aspect of surviving another person’s suicide is to accept that, in most cases, you will never fully know why

May is a peak month for suicide in Ireland and in other northern hemisphere countries. The reason why isn’t clear – it may have something to do with hormonal changes brought on by increased sunlight – but it means that at this time of the year an even greater number of families and friends are lost in the shock of grief, bewilderment and anger that accompanies the suicide of a loved one or of a friend.

Bereavement due to suicide can differ from other kinds of bereavement quite sharply. Anger is an obvious example. The excellent Suicide Support and Information (suicidesupportandinformation.ie) website points out that this anger can be directed at a range of people.

For instance, you can be angry at the person who has died because you feel rejected or abandoned by them. Other people, including family and professionals that you think could have done more to help the person can also be targets of your anger. And you will quite possibly feel anger at yourself.

One of the most common feelings is guilt, often arising from the feeling that you should have noticed or done something and that if you had, it would have made a difference. This is a very common reaction.

It isn’t really a logical reaction in the sense that the person who died may not have known themselves until quite a short time beforehand that they were going to do it. So those around them need to forgive themselves for not having known either.

The shock of suicide is probably greater than the shock of other sudden deaths and is even worse if the person died in a violent way. If you witness the person dying, or if you are the one who finds them after death the shock is even greater.

In such a case it would be normal to experience symptoms such as nightmares, sleep disturbance and persistent and intrusive images. If these continue for more than a couple of months it would be worth talking to a counsellor or to your doctor. Indeed, talking to your doctor in the immediate aftermath of the death may be helpful in any event.

A common – maybe inescapable – aspect of suicide is that those left behind continually question themselves not only about what they could have done but about why it happened. Even a suicide note may not give you the answer. Suicide notes after all are written in quite a distorted frame of mind. One important aspect of surviving another person’s suicide is to accept that, in most cases, you will never know the answers to these questions. That’s not easy to accept but it’s worth the effort.

It’s important to be willing to talk to other people about what has happened. This can mean taking the initiative, even with neighbours and friends because they don’t actually know what to say to you.

That’s an important point to remember if you feel people are disregarding your pain or giving you the cold shoulder.

Almost always they avoid the subject only because they fear making things worse by talking to you about it for instance.

This also happens with “ordinary” bereavements.

It doesn’t help that when you look around, the world seems to carry on, without the slightest pause, in spite of the terrible tragedy that has come into your life.

Read, learn and take whatever support you can get – this is a huge burden to carry on your own.

Young people might like to read the article “Dealing with grief” by Oliver Gargan, on SpunOut, on how he coped with the death of of his brother when he himself was in fourth year in school.

The Suicide Support and Information website is well worth reading if you are bereaved in this dreadful way.

– Padraig O’Morain (pomorain@yahoo.com, Twitter: @PadraigOMorain) is accredited by the Irish Association for Counselling and Psychotherapy. His latest book is Mindfulness for Worriers. His daily mindfulness reminder is free by email.

Irish family stuck in Cyprus: ‘We hope our flights home are cancelled’
7