He shook his fist in my face and roared threats about what he would do to me if I didn’t prescribe the unholy mix of benzodiazepines, neuroleptics and opiates 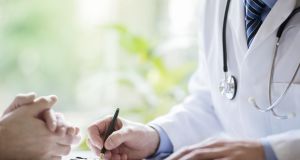 GPs are in the unique position that they can prescribe a large quantity of highly valuable and addictive drugs with a quick scribble and a signature. Photograph: iStock

The consultation was not exactly one from the textbook. He stood, I sat. He shook his fist in my face and roared threats about what he would do to me if I didn’t write the prescription he wanted.

We had a communication problem, in that I had no idea if he really was on the unholy mix of benzodiazepines, neuroleptics and opiates he was claiming as his due. I felt a bit like a guardsman on sentry duty. The punters can yell insults and pull faces, but the guardsman has to remain imperturbable. It is called “professional detachment” when you are quaking inside and assuming an expression of benign interest on the outside.

He had been “assigned” to me. I learned this in the way your GP always learns these things, by letter, around the time he had been discharged from jail. Either his medical card had expired when he was in prison, or his previous GP had decided not to have anything more to do with him. If the relationship between a doctor and the patient has irredeemably broken down, a GP can ask that they be assigned to another doctor. It is known as “putting them off your list”.

The old doctors took pride in never doing this as they felt it was giving up on their patients and unfair to their neighbouring GPs, but this was before it became possible to score any drug you can think of in every town and village in Ireland.

Drugs have changed the game

Like the Olympics and the Tour de France, drugs have changed the game. Some consultations could be a bit fraught, but you were hardly likely to get assaulted or killed. Now, even the most rural of practices have their addicts, and prescription medications are seriously and regularly abused by young drug takers.

I have been assigned patients who were deemed too dangerous to be seen by the local psychiatric service (who have a whole team to back them up) and are made go to the hospital in the city where they have professional security.

Yet, I was expected to see them on my own.

This unorthodox consultation took place on a Friday evening, when it was impossible to check out the facts. He said he needed his medication, and produced a hand-written and misspelled list. The pills had many indications and they all had a street value.

This was my dilemma.

If he really was on these drugs, and if he stopped them suddenly he could have gone into convulsions. You have to be humane about it too, if the poor fellow was that addicted. It can be hard to be firm and kind-hearted at once, but you do not want to act like a drug dealer either.

But was there any clinical indication to prescribe these drugs? Was he making it up? He could swap the tablets, or sell them. What if he overdosed? You would not want to mix them with street drugs. I could imagine his grieving family coming to me for answers, and having to live with that afterwards.

Abuse from the public

Lots of people face abuse from the public – police, bouncers, bar-staff, nurses and teachers, and we all have a lot in common. But GPs are in the unique position that they can prescribe a large quantity of highly valuable and addictive drugs with a quick scribble and a signature. We are often on our own in an office, without any back-up.

It is part of our job to be sensitive to nuance, to pick up on cues, to ask the pertinent question

We are also emotionally wide open. It is part of our job to be sensitive to nuance, to pick up on cues, to ask the pertinent question. We put children at their ease and chat with lonely old people about sport as we wonder how to explain their worsening blood results.

So when we suddenly find ourselves in a scene from Love Hate, it can be devastating.

The addiction services are patchy and underfunded, with long waiting lists, and there is scant respect for those with the dual diagnosis of psychiatric illness and addiction. There is no multidisciplinary approach and GPs are expected to manage these unfortunate people’s complex problems. In many other countries, there is a common database where GPs, hospitals and pharmacists have commonly held information, so they know exactly what medication people are on, and why, at all times, which would be very helpful.

We do our best to do what is right for addicts. We are willing to see them regularly, to stabilise them, to help them reduce their doses and get their lives on track. Nobody minds that, and it can be wonderful to be part of somebody’s journey to recovery.

Scenes like the one I describe don’t happen too often, but they do happen.

So if on occasion your GP seems distracted, if their voice or hand shakes, they might have had a fright, and are just expected to get on with it.

London Fashion Week: Paul Costelloe back in form with a little help from his son
3

Restaurant review: The loveliest of lunches in the south Dublin burbs
10