What is so wrong with unpasteurised milk? 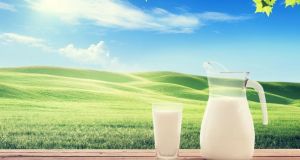 The white stuff: in many ways, milk is the ultimate magic liquid – volatile, shape-shifting, mercurial.

Mention to people that you think giving young children unpasteurised milk might be a good way to improve health, and to fight allergic reactions such as asthma, and you can expect to be shouted at as if you had suggested handing out methamphetamine in kindergartens and play schools.

We fear raw milk, yet our fear is misguided. The production and sale of raw milk in Ireland is legal, and is overseen by that well-known bastion of subversive anarchism, the Department of Agriculture, which drew up a “statutory instrument” in 2015 to regulate the terms under which raw milk can be sold.

If you want to find out which farmers produce and sell raw milk, then just click on rawmilkireland.com.

I get mine from my local wholefood shop, whose only difficulty with raw milk is that they can barely keep up with the demand.

So, what’s our problem? Well, let’s begin with that name: raw milk. Doesn’t sound too tasty, does it? But what if we borrowed a term suggested by Prof Ton Baars, a researcher in raw milk who spoke recently in Ireland.

Baars suggests we use the term “fresh, unprocessed milk”.

In Germany, such milk is called “vorzugsmilch” – merit milk. This milk must be sold within four days of production, so freshness is vital, and the German system has been in place for 80 years.

But freshness used to be an imperative of milk, so much so that in Sweden, back in the 1950s, dairy farmers used the gorgeous expression “Yesterday it was still grass” to describe their product. In fact, some Swedish farmers could boast that they could get the milk on your breakfast table in less than two hours.

Of all the lovely expressions that fresh milk has given us – the milk of human kindness; the land of milk and honey – I think “Yesterday it was still grass” is the sweetest of all. But what is to be gained by having fresh, unprocessed milk available in every shop?

Baars and many others offer ample evidence that unprocessed milk is an important protective, and a cure, against conditions such as asthma, allergies, middle ear infections, dermatitis and hay fever.

More than a century ago, American physicians would advise patients to go to the animal stockyards in order to get milk that was still warm from the cow: “The patient should be present at the milking of the cow, or should drink the milk within a few minutes afterwards,” wrote Dr WT Fernie in his 1911 book, Health To Date.

The ability to use milk’s health protective abilities is not the only gain, however.

When Barrs talked about German vorzugsmilch, he described it using a term from the world of wine. “This is grand cru milk,” he said, a comparison he returned to when he described fresh milk kefir as being “like a great wine”.

In many ways, milk is the ultimate magic liquid – volatile, shape-shifting, mercurial. Its wildness has driven scientists to attempt to control it by the only means they know: pasteurisation.

In so doing, we have lost the distinctiveness of milk, even though Ireland, as a country, has the climate and the grass to produce the finest milk in the world.

Just imagine, for instance, coming down to breakfast in an Irish hotel, and on the menu there is a short list of various milks you can choose from to pour over your porridge.

Of course, there should be some fresh goat’s milk there, too, just to make the paradox of choosing your milk even more deliciously complex.

We should remember that in the days before the second World War, the government in Holland cautioned against giving children pasteurised milk. The world is not pasteurised.