Vindicating women’s rights does not lead to chaos 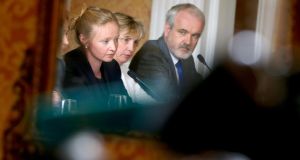 Leah Hoctor of the Centre for Reproductive Rights at a press conference after the United Nations Human Rights Committee ruling. Photograph: Marc O’Sullivan

Ireland’s maternity services and the eighth amendment to the Constitution, article 40.3.3, provide plenty of copy for opinion columnists. There seems to be no end to pregnancy and birth horror stories. No other health service has been criticised as often or as trenchantly. In recent years the Lourdes hospital inquiry into unnecessary hysterectomies, the death of Savita Halappanavar at University Hospital Galway in 2012 and baby deaths in the Midland Regional Hospital, Portlaoise, dominated the news for days on end, and rightly so.

Now, every second week we hear about dead or damaged women and their babies. Current media stories about hospital turf wars, baby deaths in Cavan, parents waiting 24 years to find out what happened to their newborn daughter, and women who had symphysiotomies in the 1960s still waiting for justice, do not inspire confidence in maternity services.

The latest horror story concerns a woman who had to travel to England for an abortion when her foetus was diagnosed with a fatal foetal abnormality. She spent 36 hours in labour and, still weak and bleeding, had to travel back to Dublin within hours of the birth because she could not afford to stay in the UK.

The United Nations Human Rights Committee found she had been subjected to cruel, inhuman, and degrading treatment in violation of article seven of the International Covenant on Civil and Political Rights. The committee also found that her rights in relation to article 17 (privacy) and article 26 (discrimination) had been violated. The committee called on Ireland to amend its laws to ensure “effective, timely and accessible procedures for pregnancy termination in Ireland”.

Archbishop of Armagh and Primate of All Ireland Eamon Martin said he “had some difficulties with outside bodies telling us what to do”. That’s all right then. Let’s continue to ignore women’s rights. All that matters, according to the archbishop, is the equal right to life of the foetus, “the fundamental human right which cannot be trumped by any other right such as the right to choose. If you take away [the right to life] everything crumbles.” This is good old-fashioned misogyny.

Vindicating women’s rights does not lead to chaos. In the past, Ireland’s extremely restrictive abortion laws did not ensure babies and children had their human rights respected. If anything, society’s censorious attitudes to sex and the so-called pro-life stance produced a culture in which Magdalene laundries, mother-and-baby homes and illegal adoptions flourished. Even today, foetuses matter only until birth; afterwards no one cares too much what kind of lives children have to endure. Everything does not “crumble” when women and girls have their human rights vindicated. Denying one group of people their human rights does not make the world safer for everybody else.

A misogynistic culture pervades Ireland’s maternity services. Creating a better future together: National Maternity Strategy 2016-2026 was supposed to create a more women-friendly service but six months on has anything changed? The short answer is no. A highly interventionist, disempowering model of maternity care still operates in all hospitals.

The monthly maternity patient safety statement for March show induction of labour rates vary from 23 per cent to a whopping 50 per cent. Almost a third of women now have Caesarean sections and almost a half of first-time mothers had Caesareans in one hospital. Unless women are asking to be induced, or opting for unnecessary Caesarean sections, something is drastically wrong. These levels of intervention in childbirth cannot be justified on any health grounds.

It is time for change. We need a modern maternity strategy that includes abortion services. All European countries, with the exception of Ireland and Malta, permit abortion to save a woman’s life, preserve her physical and mental health, and in cases of rape and incest, as well as foetal impairment.

Even countries with abysmal track records on women’s rights such as Iran, India and Turkey allow abortion in cases of foetal impairment.

The State has 180 days (until December 6th) to supply “information about the measures taken to give effect to the committee’s views”.

The Government has proposed a citizens’ assembly to discuss article 40.3.3. A decision will then be taken as to whether or not to have a referendum. The Irish Human Rights and Equality Commission wants the UN findings considered in full by the Citizen’s Assembly to ensure that Ireland’s legal framework complies with international obligations.

This will take longer than 180 days. My granddaughters (aged four to 16) may be lucky enough to benefit from a more humane maternity regime. I’m not holding my breath.

Jacky Jones is a former Health Service Executive regional manager of health promotion and is a member of the Healthy Ireland Council.