Tinnitus: Are concerts and headphones taking their toll? 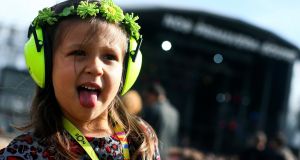 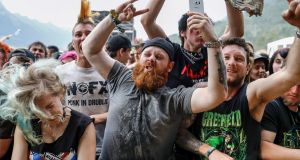 Festival-goers at a concert by US punk band NOFX in Switzerland this summer. 45,000 people in Ireland have tinnitus – that’s almost an entire rock concert audience at the Aviva stadium. Photograph: Peter Klaunzer/EPA

You know that ringing in your ear you get after a particularly loud rock concert? All those screaming guitar solos, high-pitched synths and amp feedback buzzing around in your head hours after the concert is over. And that’s just for the band. It’s even louder for the audience, who get the full brunt of the PA system (well, they’d better get the full brunt or you’re not doing your rock star job).

The ringing will eventually die down and then it’s back to normal hearing. But what if the sound doesn’t go away, but just keeps on ringing endlessly in your ear, as though Jimi Hendrix was inside your head trying to break the world record for the longest sustained guitar note in rock history?

And what if it’s still there the next day, and the next, and the next, and the rest of the year, often getting louder, sometimes getting softer, but never, ever completely disappearing? After a year or two of listening to this tuneless epic, the realisation dawns slowly that this maddening noise is never going to go away, so you may as well live with it, because the only alternative is to bang your head off the wall or poke your eardrums out with a drumstick.

Or was it David Bowie’s “live rehearsal” in the Factory in 1997, when he played a tooth-loosening drum ’n’ bass set, while I stood near the speakers to get as close as possible to my idol?

Most likely, though, it’s an accumulation of noise damage. After years of reviewing rock gigs and albums, I now have a continuous ringing sound in my head, and if I was reviewing this particular tune, I’d give it zero stars. But what’s causing it? There’s no mini-Angus Young inside my ear, so how can I be hearing a sound that’s not there? Reassuringly, I’m not the only one hearing this annoying sound.

According to the Irish Tinnitus Association, 45,000 people in Ireland suffer from the condition. That’s almost the entire audience for AC/DC at the Aviva stadium.

“It’s a condition in which people have a sound in their head which doesn’t have an external cause,” says Jean Scott, chairwoman of the Irish Tinnitus Association, a support group for people living with tinnitus.

“They would hear many different kinds of noises – buzzing, whistling, roaring, rumbling – and some people sense these as very loud and others have it in the back of their head. But it’s the people who have it very loud who are really distressed by it.”

Brendan Conlon, the ENT (ear, nose and throat) consultant at St James’s Hospital in Dublin, says: “Tinnitus has always been a big problem and it’s a huge amount of the referral work that is sent to us. Some statistics say 10 per cent of the population suffer from tinnitus, but as you get a bit older it gets higher, and about 1 per cent of the population suffers from catastrophic tinnitus. They come into us and they’re almost suicidal with it. They have huge issues with anxiety and stress and they can’t sleep. It’s so loud in their head.”

The causes of tinnitus are varied. Exposure to loud noise over prolonged periods and hearing disorders associated with ageing are two major causes of tinnitus, which explains why there would be lots of ageing rockers like myself going round with a buzzing in their heads. But it can also be brought on by an illness or a viral infection, following an injury such as a road traffic accident, or an emotional trauma, or even as a side effect of medication.

“Most patients who have tinnitus will also have hearing loss; there’s by and large a pretty close association between that,” says Conlon. “Typically we see the elderly, because they have hearing loss, people over 50 and 60, and we often see it in people who have noise exposure, people working in bands and the Army guys, before they started using ear protection.”

And modern devices are setting off a tinnitus timebomb in younger people.

“Childhood tinnitus is going to be a big problem with the next generation,” says Scott. “All these gadgets that people have going all the time. When you see a young couple with their baby watching cartoons on a tablet screen . . . people need to be aware of what they’re doing to their children.”

Conlon agrees: “I think we’ll be looking at huge numbers with tinnitus over the next 10 or 15 years; the kids and adults going around with earphones stuck in their ears. It certainly isn’t something that’s going to go away.”

So, is there any way to turn off this noise in our heads? Alas, that’s not as simple as flicking a switch. In some cases, tinnitus can be treated – for instance, if it’s caused by a middle-ear infection, antibiotics might do the job or clearing wax out of blocked ears might help. But if there’s permanent damage of the delicate hair cells in the inner ear, there’s not much that can be done.

There is a lot of research being done into how to “dampen down” tinnitus, but until a magic button can be found to shut it off, most sufferers will have to learn to live with it. The good news is that it can be managed so as to have minimal effect on your quality of life. You may not be able to turn off the tinnitus, but you can lessen your perception of it.

“Many people will find relaxation therapies helpful,” says Scott. “Train yourself not to notice the sound so much. Walk down the beach, go for a coffee, go and do something you like doing. When I’m in Lanzarote and I’ve got sunshine, I’m on the beach, I’m relaxed, I don’t notice it so much.”

“The funny thing about tinnitus is the huge amount of emotional overlay on top of how people deal with their tinnitus,” says Conlon. “Some people get tinnitus and it drives them absolutely mad. They can’t live with it, they’re crying and they’re really upset over it. Other people may have louder tinnitus and go, ‘Ah sure I’ve had that for years, I just tune out of it.’ So there’s quite a bit of variability.

Many sufferers wrongly believe their tinnitus is caused by a serious disease or will get louder to the point of driving them mad.

“For some patients, they’re just looking for reassurance that there’s nothing serious, and they’re fine,” says Conlon. “Other patients may have anxiety issues, and they might need some counselling. If there’s significant hearing loss, sometimes a hearing aid can provide some amplification, and the amplification can mask the tinnitus.

“A bit of background noise can be helpful; put on a bit of music at night and that will distract. With most patients, it’s in the dead quiet that they notice the tinnitus.

“There isn’t a tablet, there isn’t a surgical procedure, there isn’t an easy answer, but on the positive side, most patients adapt to it in time,” Conlon says. “People typically find the tinnitus most obtrusive when they get it initially. They might find it quite bothersome and annoying for a year or so, but normally if you see them after a couple of years, they say they don’t notice it so much.”

Scott advises sufferers to “Go and do something nice, watch some television, listen to Lyric FM. I’d read a book with classical music in the background. Go out and do something rather than stay in all day. There’s no use pulling the duvet over your head, you’ll just take the tinnitus with you.”

Fears for tears: why do we tell boys not to cry?
6

Missing your grandchildren during lockdown: ‘The pain is physical’
7

My cancer scare, the marathon and me
9