Sir Michael Marmot has spent his career trying to break down the barriers to health equality, and he believes it should be a main priority for governments 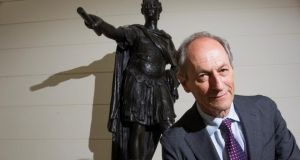 Sir Michael Marmot: “There’s an intimate relationship between where you are on the social hierarchy and your health. The people at the top have the longest life, those in the middle are shorter, and as you get lower and lower, the life expectancy gets shorter and shorter.”

Money doesn’t buy happiness, they say, but the clear evidence is that it does buy you extra years of life. The flip side of this, of course, is that the poor experience the worst health outcomes and the shortest life expectancies.

Tackling this massive health inequality should be a main priority of governments because of the ethical issues involved, says world-renowned epidemiologist Sir Michael Marmot, who has devoted his working life to the issue.

“There’s an intimate relationship between where you are on the social hierarchy and your health.

“The people at the top have the longest life, those in the middle are shorter, and as you get lower and lower, the life expectancy gets shorter and shorter,” he told The Irish Times on a visit to Dublin earlier this month.

‘Social gradient’
Marmot’s research has detailed the “social gradient” affecting the length of all our lives according to where we are on the economic pecking order.

In a 2010 report for the last Labour government in the UK, he found that people living in the poorest neighbourhoods died seven years earlier on average than those in the wealthiest neighbourhoods.

A number of Irish reports, including the 2008 all-island study by the Institute of Public Health and the more recent work by the Tasc think-tank, have pointed to similar trends here, yet it isn’t clear that the Government has got the message.

“Let’s not look just at debt and deficits but at the impact on people’s lives of government decisions and on health equity. And if the Minister for Finance says, ‘You’re being unrealistic,’ I say, ‘Sorry, mate, we don’t have the luxury of not doing that,’” says Marmot (68), lapsing just briefly into the Australian-accented patois of his youth.

Born in England, he moved to Australia in childhood and qualified as a medical doctor in Sydney. In the 1980s, he led ground- breaking research which identified a correlation between life expectancy and social status among British civil servants.

Social determinants
A former president of the British Medical Association, he chaired a World Health Organisation commission on social determinants of health from 2005-2008 and has won numerous awards for his work in public health.

In the UK review, he set out the six areas he believes governments need to develop policies to improve health equity – early child development; education; employment; minimum incomes for healthy living; health neighbourhoods; and a social determinants approach to prevention on issues such as smoking and obesity.

Critics have objected that people can control their own health destinies by, for example, quitting smoking or eating better but Marmot says he has no time for the “personal responsibility” arguments.

“I’ve been hearing that for a very long time and I would say it’s contradicted by the evidence.”

While it is true that poorer people are more likely to smoke, there is no evidence that they are being more irresponsible, he argues.

“They found that people with low incomes are under an increased cognitive load and find it more difficult to make decisions for the future.

“It is poverty which makes it difficult for people to juggle complex decisions.

“The causes arise from the conditions in which people are born, live, work and then age. But when you’re sick, lack of access adds insult to the injury of being sick in the first place.”

He says there is evidence that countries with more generous social welfare systems have better health equality because of the impact on child poverty.

Britain’s health system has become the focus of intense debate in the UK since Labour gave way to the Conservative/Lib Dem coalition in recent years, and Marmot says many of the changes proposed for the NHS are hard to understand.

Good signs
However, there are good signs too, including a forthcoming White Paper, the moving of public health into the local government area and the introduction of a statutory duty on the part of the health secretary to reduce health inequality.

Overall though, the economic and social policies currently being pursued in the UK, including changes to welfare and more indirect taxes, are hitting the poor, he says.

Ultimately, Marmot would like all of us to look differently at health because, he says, it is different.

Sir Michael Marmot’s research has been hugely influential in Irish health policy research circles, partly because the issues he has described in the UK and elsewhere arise here too.

Marmot was in Dublin earlier this month at the invitation of the Irish Cancer Society and the Society of St Vincent de Paul (VdeP), and the meeting he spoke at heard many examples of local health inequalities.

In Ireland, lung, stomach, head and neck, and cervical cancers are all more common in areas of higher unemployment and lower levels of education, data from the National Cancer Registry shows. Men in areas with the poorest education levels have a 32 per cent greater risk of lung cancer than men living in areas with the highest level, while women have a 23 per cent greater risk.

“It’s a blight on society. In the public system, you depend on largesse while there is privileged and preferential access for those who pay in the private system.”

While the Government’s plans for changing the system are ambitious and include a system of universal health insurance, Deane says it “shouldn’t have taken two years to realise there were entitlement problems in relation to free GP care”.

But with resources in short supply, she says that while “equal access to equal care for equal need” is the aim, a system of “tailored universalism” might represent the best use of limited funds.

Donal Buggy, head of services with the Irish Cancer Society, says there is evidence that single health messages aimed at the entire population are not working, with inequalities growing “at the margins”. In contrast, targeted campaigns drawn up with specific sectors and peer-led are showing more successful.

‘If as a society we help people to die in dignity, why we do we have problems helping people live with dignity?’