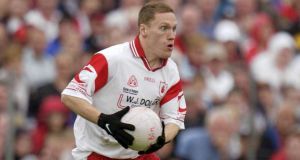 Gaelic footballer Cormac McAnallen, who died from Sads a year after winning the All-Ireland with Tyrone in 2003. Photograph: Brendan Moran/Sportsfile

One of Ireland’s most prominent cardiologists has criticised the absence in Ireland of facilities for cardiac genetic testing.

Dr Joe Galvin, a specialist at the Mater hospital in Dublin, told a conference last week that it would be a “major mistake” not to offer clinical gene sequencing in Ireland. Addressing the annual symposium of the faculty of pathology at the Royal College of Physicians of Ireland, Galvin said the Mater family heart unit is hoping to set up a clinical gene sequencing unit to provide cardiac genetic testing.

The biggest risk factor for Sudden Adult Death Syndrome (Sads) is genetic, he said, and genetic testing can ameliorate that risk. Currently, cardiac genetic tests are sent to a laboratory in Spain for analysis. Galvin said it was important that it be done in Ireland instead.

“It is unfortunate to see this being outsourced abroad. We are moving towards personalised medicine. It would be a major mistake not to offer clinical gene sequencing in Ireland,” Galvin tells The Irish Times. “By making a diagnosis, we can institute preventive therapies, whether lifestyle changes or medication.”

The issue of Sads came to national attention following the shocking death of the Tyrone Gaelic football captain Cormac McAnallen almost 11 years ago.

There could hardly have been a greater paragon of good health and sporting prowess. McAnallan’s death came a year after he won his first All-Ireland medal with Tyrone. He had just turned 24 and was regarded as the best full-back in the game. He had won a string of honours, including Young Player of the Year in 2001 and an All-Star in the All-Ireland-winning year, 2003. He also represented his country in International Rules.

He died in his sleep on March 2nd, 2004, without warning. His death was all the more terrible for seeming inexplicable, but the cause was eventually found to be Sads. This is primarily a disease of the electrical impulses of the heart and strikes young people who appear to be in good health.

Sads is no longer the silent killer it once was. Two years after those deaths, a Department of Health taskforce reported on how to deal with Sads. It recommended a much greater provision of defibrillators in communities around Ireland, and much quicker response times by emergency services. It also advised that screening should be carried out on the families of those who had died or displayed symptoms, especially those playing sport at a high level. “It was the trigger for us,” says Galvin. “That led to the government taskforce on the prevention of sudden cardiac death. It has a whole bunch of recommendations. About one-third of them have been fulfilled.”

“This is not common, but it is not vanishingly rare,” he says. He has identified genetic testing and community first response as the things most needed at the moment.

He believes the Health Service Executive should fund the two family screening clinics, at Tallaght Hospital and at the Mater hospital, which was opened in 2007, especially given that the greatest indicator of a risk from Sads is to have a history of sudden cardiac death in the family.

“You won’t get any better value than that,” he says.

Research has found that some 2,000 cardiac arrests annually are attended to by the ambulance services. Unfortunately, many of those stricken die before the emergency services can get to them.

The majority of people who die from heart failure in Ireland are aged between 60 and 80. Coronary disease causes most of these deaths over the age of 40.

In the 120 young people under the age of 40 whose premature deaths from heart failure have been studied, Sads was the most common cause, accounting for 27 per cent of all deaths. (This was followed by coronary artery disease, at 20 per cent.) All who died from coronary artery disease were more than 30 years of age.

Death from heart failure remains one of Ireland’s biggest killers, but there is a difference between Sads and other kinds of heart attack, which often include a coronary blockage. Heart failure claims the lives of approximately 15 people a day, and most of those who die are over 65 years old.

With Sads, the autopsy is generally completely normal. Fortunately, Sads is not very common, though it is more common than many doctors presumed. It amounts to approximately one young person dying of it every week in Ireland.

In the past 15 years, analysis of post-mortem results for those who died from Sads has “dramatically improved”, according to Galvin.

“Those who have a history of sudden death in the family, be it from cot death [sudden infant death syndrome (Sids)] or Sads should get themselves checked out at the Mater family heart screening clinic,” he said.

“This is a major resource for affected families. We offer bereavement counselling. The post-mortem reports are incredibly important. It also helps us create the registry for sudden cardiac death in the young.

“If there is a sudden death in the family, we ask people not to take medicines which prolong the QT interval [the length of the electrical impulse that causes the heart to beat].”