‘Should I give my teen son condoms even though I don’t want him to have sex?’

Dear Roe: The issue here is your attitude towards sex and what you want your son’s to be 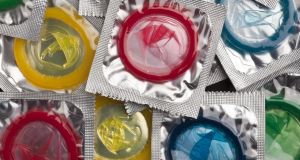 You’re right in suspecting your son will have sex whether you want him to or not, and so I believe that making condoms available to him is a good idea. Photograph: Getty Images

My son is 17 and he has a girlfriend the same age. They spend quite a lot of time together but her parents seem to work very late and I’m getting worried about them being alone together so often. I’m worried that they’ll begin having sex, which I’m not happy about anyway, but I also don’t know if they have access to condoms. Should I give my son condoms? I don’t want him to think I’m condoning them having sex.

You’re right in suspecting your son will have sex whether you want him to or not, and so I believe that making condoms available to him is a good idea.

However, I feel there’s a bigger issue here. Your worry about what message giving or not giving him condoms conveys to him indicates you’re using this one action to communicate a lot about your attitude towards sexuality and sexual health, and what you want his attitude to be towards sexuality and sexual health – and frankly, condoms don’t have enough room to hold all that responsibility. They have their own job to do.

Teaching your children about sex is like teaching them about literally anything else; it’s not one lesson or one sex-education class or one ‘The Talk.’ It’s a constant and complex conversation, one that will evolve with your child’s age, maturity, understanding, experience – and questions. Because they will have questions, do have questions. Your job is to make sure they feel comfortable asking them, and to answer them when you can, and provide them with the support and tools needed to find those answers together when you don’t.

Preparing for his questions will also make you look deeper at your own concerns. You’re scared that their alone-time will result in them having sex – and why is this is bad thing in your mind, specifically? In Ireland, the average age that boys have sex for the first time is 17, so your son is not acting in an unprecedented manner. Your idea of providing him with condoms indicates you are soundly and justifiably concerned about unwanted pregnancy and STIs – but what else? Do you feel like your son’s relationship is a healthy and respectful one? Are you sure he and his girlfriend both fully understand the nature of consent and how to enact it? Do you think sex together would be something that would positively impact them as individuals and as a couple? What do you think they both need to understand for sex to be something empowering for both of them?

Answering these questions will make you think deeply about what information and insight about sex you think is important for your son to know, necessarily ridding you of the urge to simplify your message down to “Do have sex” or “Don’t have sex”. More importantly, sharing these concerns with your son in a conversation will also rid him of any notion that his decisions about sex are simple, instead of choices that should be made with care, consideration and knowledge.

I don’t think many parents are comfortable with the thought of their children having sex, at any age. But I also don’t think anyone whose parents simply told them, “Don’t have sex” learned anything from it. You can remain slightly uncomfortable with the idea that your son is having sex, but make sure you’re comfortable knowing you’ve done your best to make sure the sex he does eventually have is safe, empowering and informed.

Roe McDermott is a writer and Fulbright Scholar with an MA in Sexuality Studies from San Francisco State University. She’s currently undertaking a PhD programme studying Gendered and Sexual Citizenship at the Open University and Oxford.