Dementia has taken cancer’s place as the most feared illness 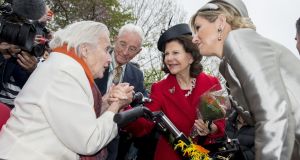 Queen Maxima of The Netherlands and Sweden’s Queen Silvia on a visit to the Dutch village Hogeweyk, designed for people with dementia. Photograph: Frank van Beek/AFP/Getty Images)

Cancer used to be the most feared illness, to be spoken of in a whisper and abbreviated to the Big C.

What is the most feared illness today?

I expect dementia has taken the place of cancer.

This change is partly due to the medical advances in treating cancer and partly to the ageing of the population – some dementia occurs among people who are not old but it is largely a disease of old age.

Today, about 55,000 people in Ireland have some form of dementia, which includes Alzheimer’s. That number is projected to rise to about 77,000 in the next 10 years.

When we think of dementia, we think of a person who, to a greater or lesser degree, has lost his or her memory, and who cannot navigate the details of daily life, perhaps is in danger of being found wandering the streets far from home with no idea how they got there. In other words, we think of someone who is very much on the outside of normal life.

What would it be like if society saw dementia and other illnesses and disabilities as more or less normal aspects of the human condition, approached them with acceptance and even built itself around them?

Why shouldn’t a person with dementia be able to go to the pub or restaurant with a carer? I expect many do, actually, but probably while they are still living at home. Not everyone with dementia is sitting in the corner unable to go out. Many, with the help of loved ones, keep a social life going for as long as they possibly can.

If that became normal and accepted, wouldn’t it make a huge difference to the levels of fear that surround this syndrome of diseases?

I read recently about the Dutch village, called Hogeweyk, designed for people with dementia but in which the people behind the shop counters are nurses and care workers. The people who live there have dementia and for them there is no way out of the village. Some residents no doubt know they have dementia but others presumably do not.

We are a long way behind that kind of vision in relation not only to dementia but to mental illnesses, disabilities and other normal afflictions of human nature.

If society in practice regarded people with disabilities and mental illnesses as equal members, we would see to it that they got the medical and other services they needed just as we expect to get those services for ourselves. Parking on a footpath would become so reprehensible that you wouldn’t do it even if there was nobody around to see you doing it. A small detail perhaps, but the details matter in life.

And, of course, we would surround families with care and help and concern. Instead of just leaving them to get on with it as we do now.

But really I am not talking so much here about specific services or specific ‘deficits’ as about a whole change in how we see things.

The basic question I am asking is, who do we construct society for?

That is what would take away – or at least reduce – the fear of becoming less than normal in those who will one day get that diagnosis of dementia and in a huge range of other, real, people as well.

And I guess that change in attitude starts with each one of us today.

Padraig O’Morain (pomorain@yahoo.com) is accredited by the Irish Association for Counselling and Psychotherapy. His latest book is Mindfulness for Worriers. His daily mindfulness reminder is free by email. Twitter: @PadraigOMorain

What can €120k buy you in Italy, Greece, Cyprus, Lithuania and Louth?
5

Formula One turns 70 in an uncertain age
10