Sheep thrills: the hazards of cycling on rural roads 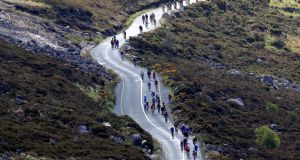 The Wicklow 200km cycle ride: there are a few important differences between urban and rural cycling. Photograph: Nick Bradshaw

Do you remember the first time you cycled out of your mother or father’s eyesight and earshot, your young brain nearly exploding with the realisation that there was a whole new world out there and you finally had the means to explore it? Can you recall how liberating it felt?

That feeling is there to be recaptured, should you wish. All you have to do is cycle out into the countryside, to feel the wind on your face, the fresh air in your lungs. It’s magical.

We’re lucky to live in Ireland. The place is full of countryside. But before you pack your sandwiches and hurtle headlong into the hills, you must realise there are a few important differences between urban and rural cycling. Knowledge of these could save your life. Traffic: Sure, there’s generally less traffic in the country than in towns and cities. Problem is, it’s invariably travelling faster. And when those big metal things hit you, they really hurt. So don’t be fooled by the quiet, seemingly abandoned road. At any second, a halfwit in a Subaru could come tearing around a corner and skittle you. Or you could be ploughing downhill, bum in the air like Chris Froome himself, only to impale yourself on one of those random torture devices Irish farmers seem to delight in hanging off the back of their tractors. Eyes and ears open at all times.

Potholes: Despite our green and pleasant land boasting enough billiard table smooth motorways to transport the Chinese army, our backroad potholes are still the stuff of legend. Despite the recent general election and the flurry of pothole filling that invariably accompanies such plebiscites, they lurk around every bend, waiting to swallow you, bike and all. Or, failing that, give you a nasty puncture. And don’t ever be tempted to ride through a puddle. For nine times out of 10 it’ll have a pothole underneath it. The other time out of 10 it’s home to a Kraken.

While we’re on the subject, always carry two spare inner tubes. One for fixing the puncture you got when you ignored the advice not to cycle through a pothole, puddled or otherwise. And the second for when you do it again. A portable tool kit, a pump and enough food and drink to last you are vital too, as is a phone to make the ignominious call home to be rescued if all else fails.

Hedges: Hedges can be your friend. They provide splendid shelter from the wind and rain. And sometimes lunch too, if it’s blackberry season. However, they can also be deathtraps. If you are cycling in strong crosswinds, always be mindful of gaps in the bushes, be they gates or boreens, as being caught by a gust of wind and blown sideways into a truck is no fun, by all accounts.

Visibility: Light yourself up like a Christmas tree if you’re cycling in the countryside during anything but perfect daylight. Whatever hope a driver has of seeing an unlit bike under streetlights, the chances of them spotting you under the moon are slim to none. Animals: I’ve lost count of the number of sheep I’ve been almost decapitated whilst descending at speed down mountain roads. Never assume anything of a sheep. They are as thick as rocks and will never do what you expect them to. The only sensible thing is to come to a halt and let them do whatever comes into their tiny little brains before you proceed. Cattle are the same.

Horses, on the other hand, are noble, intelligent beasts who understand logic and they may be passed, albeit carefully. Approach them gently, ideally with a “coming through” shout to the rider first and preferably on the opposite side of the road. Do not, under any circumstances, whizz past a horse at speed. It’ll probably go ballistic. As will the rider, once they’ve extricated themselves from the tree they were bucked into.

As for those horrid yappy little dogs that run along beside you trying to nibble your ankles, I find a hefty roar soon stops them in their tracks. Failing that, a good squirt from your water bottle will see them scuttle off like a scolded teenager threatened with the loss of WiFi privileges.

While we’re on the subject, it’s a good idea to swerve roadkill. Do not, however ghoulish you are, be tempted to ride through it. Decomposing badger is a divil to get off paintwork.

And finally, be aware that cycling long distances tends to hurt. But while you may be in a world of pain and struggling with every fibre of your being just to keep going, don’t be afraid to stop and look around once in a while. It’ll make you feel alive.