David Flanagan’s book on rock-climbing will become a classic, with its high-quality photographs and accurate route descriptions 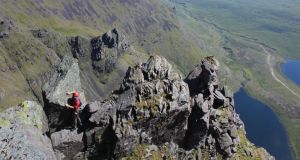 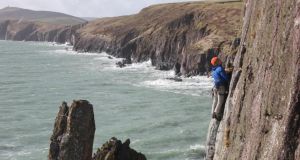 Rock-climbing in Ireland in its most primitive form probably extends back a few hundred years. When John Millington Synge visited the Aran Islands around the turn of the 20th century, he marvelled at the ability of the islanders to scale and descend the northern cliffs of the island as they hunted seagulls. Their only equipment: pampooties – or moccasins – and very basic hemp rope.

Accounts by early visitors to the bigger ranges of mountains spoke of the agility of the local shepherds and guides to clamber up rock faces with no fear of the objective dangers.

It was not until the last century – a little in the 1930s, more in the 1940s and 1950s – that a small and dedicated band of climbers, most of them students, embraced the notion that climbing vertically as recreation could be regarded as a sport and not a death wish. They pioneered the first documented rock-climbing routes in Ireland.

Most were members of the Irish Mountaineering Club, which is still going strong, although there were a few students who had come over from the UK. During that time they put up new routes in Dalkey Quarry in south Dublin and in the crags towering over Glendalough Valley in Co Wicklow. A duo with the surnames of Alberry and Crofton did the first impressive ascent of the full mountaineering route, Carrot Ridge in the Twelve Bens, as early as 1933.

Like all rock-climbing routes they were each baptised with a name. In the early days the names were either classical or borrowed from similar routes in Scotland and the UK – Tower Ridge, Helios, Pilaster, the Eliminates, Quartz Gully and Spéirbhean. Later the names became more exotic. On the sea cliffs of Alladie in Co Clare you find Sharkbait, Wall of Fossils and Fall of Wossils.

Some have become classic routes that are still climbed today. Unlike the few hardy souls of those early days, the sport of climbing has become increasingly popular. The number of climbers rose steadily, if unspectacularly, in the following decades and has exploded in the past decades. It can be attributed to the availability of better clothing, footwear and protective gear, no longer as prohibitively priced as it was once. In addition there is a greater appreciation of outdoor recreation. The emergence of really good climbing walls, such as Awesome Walls in Dublin and Cork, has made a huge difference.

A wonderful new book, Rock Climbing in Ireland, by David Flanagan, gives a great illustration of how popular climbing has become, listing almost 500 of the best climbs in Ireland, spread across 31 crags, cliffs and mountain ranges from Fair Head, to Donegal, the Mournes, Dublin, Wicklow, Waterford, Fanore in Clare and, of course, Kerry.

While climbing has become popular in Ireland, it is not as developed as in the UK or any of the continental European countries. That means there are dozens, perhaps hundreds, of crags that have yet to be climbed.

There have been individual guides to crags in the past but Flanagan’s lavishly illustrated and well-designed anthology collects the best climbs of the country into one volume for the first time. For climbers, this one volume will open up new opportunities elsewhere in the country. For one, it shows the contrasts and the sheer range of rock-climbing available in Ireland: from sea cliffs to crags; from granite to limestone to red sandstone, such as at the Gap of Dunloe in Kerry.

The standard response of people who baulk at the thought of climbing is: “I’m not going to do that, I’m scared of heights.” But it’s not that those who climb are unafraid of heights: there are no bigger Holy Mary moments than when you peer below your feet at the abyss below.

It would be churlish to say that there are no risks: of course there are, and they increase with the difficulties of the climb: somebody climbing at E8 (Extreme 8) could easily take up alternative employment with a circus. The use of safety equipment such as harnesses, belay devices, dynamic ropes, helmets and protective gear (allied to assured rope work) all minimise the risk.

Britain and Ireland tend to favour a traditional approach to climbing. Unlike on the Continent, there are virtually no sports’ climbs (bolted rings that allow the lead climbers simply clip into the rope with a quick-draw as they ascend, much as you will find at an indoor climbing wall). In the outdoors in Ireland, protective gear such as nuts, hexes, and “friends” are placed into cracks and flares: the idea is they will take the weight of the lead climber if they take a fall.

Flanagan’s book contains climbs of all grades, from simple to those for immortals only. What’s nice about climbing is that you find people of all ages and all abilities doing it. In fact, there are quite a few competent climbers who took to the sport only in their 50s. Another myth about climbing is that it’s all about upper-body strength. Sure that becomes important if you want to climb at a high level, but footwork, flexibility and technique are equally important. As well as requiring almost Buddha-like focus, climbing is a really good workout for various muscle groups in the arms, legs, neck and the core. The surroundings tend to be spectacular, which is also a big plus.

Flanagan’s book will become a classic, with its high-quality photographs and accurate route descriptions. What’s nice is that it also includes some of the longer classic mountain routes such as Carrot Ridge and Howling Ridge on the northeast face of Carrauntoohil, which was first climbed by Con Moriarty and John Cronin as recently as the winter of 1987.

Rock Climbing in Ireland, by David Flanagan, is published by Three Rock Books and is available at €25 from usual outlets and threerockbooks.com