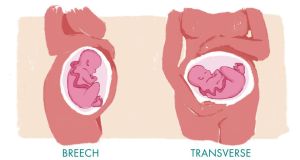 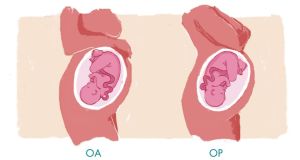 Your baby’s position in your uterus and pelvis will help determine the type of labour and birth you will have. The position of the baby is significant only in the last few weeks of pregnancy. As the due date approaches, your baby’s head – or bottom – should “engage”. This means they drop into the pelvis in preparation for birth. However, some babies may not engage until labour begins.

Part of the OFP theory is that modern furniture (lots of relaxing in front of the TV); modern deportment (not sitting upright); and modern lifestyles (no scrubbing floors on our knees) all encourage babies into an occipito posterior (OP) position, rather than the best position for labour – occipito anterior (OA).

Ask your caregiver if they can tell you the position of your baby. If you lie flat and the baby is in the OP position, there will be a dip or hollow around your belly button.

To encourage a baby into the best position for labour, during the last six weeks of pregnancy (or the last three weeks, if you have given birth previously), try some of the following:

nWhen watching TV sit upright in a chair, on a birthing ball, or on the couch, or kneel on the floor leaning over a beanbag, birthing ball or cushions.

nSit astride a chair that is placed back to front and place your arms on the chair back.

nWhen resting or sleeping, lie on your side with pillows behind your back, and your top leg resting forward so that the knee touches the mattress. This ensures that the abdomen is forward. An extra cushion between the thighs can also be helpful.

nLying frequently on your left side can also encourage the baby into the “left anterior” position, which puts the baby’s spine on the left side of your abdomen.

nGo on all fours – keeping your arms parallel with your upper legs – and rotate or rock your pelvis. Some women even crawl around the house to encourage a turn. If possible, spend 10 to 30 minutes a day on all fours in the last four weeks of pregnancy. This can help get the baby into the best position for labour.

engaged in is head-down, face towards your back, and back towards your tummy. In obstetric terms, this is known as occipito anterior (OA). In this position, the baby is able to flex their head, and the smallest part of the head will come through the pelvis, cervix and vagina first, which is easier on both mum and baby.

The majority of babies rotate from a posterior to an anterior position during labour, and this can also result in longer, more painful labours.

Braxton Hicks contractions before labour starts may be especially painful if your baby is OP, with lots of pressure on the bladder as the baby tries to rotate their head.

“You can encourage your baby into an anterior position [see optimal fetal positioning above]. And you may want to try this exercise: In the all-fours position, breathe in. As you exhale, slowly arch your back, relaxing your neck so that your head hangs down. Breathe in again, bringing your body back to the starting position. Try to keep your abdominal muscles relaxed as your gently arch and flatten your back. Repeat about 10 times a few times daily,” says Hanahoe.

nExtended/Frank breech: bottom first, with feet up by head;

: baby in a kneeling position (this is very rare).

There may be a breech clinic in your hospital where a scan is taken to assess the size and position of the baby, and the amount of fluid around them.

An external cephalic version (ECV) will then be attempted. This is where the baby is encouraged to move by an obstetrician placing their hands on your abdomen and moving the baby through a somersault, and into place. It is usually attempted after 37 weeks but cannot be done if the breech is already engaged.

It is usually easier for the doctor to turn the baby of a mum who has given birth previously, because her muscle tone is less firm. The procedure can be quite uncomfortable, and the success rate is about 50 per cent. If an ECV is unsuccessful, it is still possible to have a normal breech birth.

nAdopt the knee-chest position. To do this, kneel on your bed with your bottom in the air and your hips flexed at slightly more than 90 degrees (don’t let your thighs press against your bump). Try to keep your head, shoulders, and upper chest flat on your mattress. Maintain this position for 15 minutes every two waking hours for five consecutive days.

nIf you don’t have back or pelvic pain, try lying on your back with your hips slightly elevated and your hips and knees flexed. Gently roll from side to side for 10 minutes, three times a day.

cm off the floor using firm pillows or cushions.

“Breech deliveries are possible, but many caregivers prefer to deliver by Caesarean section. However, if it is not your first baby, and the breech is well down into the pelvis, it may be worth giving labour a go as the cervix should dilate quickly and your recovery will be faster than after a section,” says Hanahoe.

daily basis. It happens most often with women who are having a second or subsequent baby when the muscle tone is poorer.

The woman will normally be admitted to hospital at 37 weeks in the hopes that the lie will stabilise. If the baby ends up in a headfirst or breech position, an obstetrician will attempt to induce labour to avoid a Caesarean section. The lie sometimes does not stabilise until 40 weeks, so the doctor can often decide, late in the pregnancy, to carry out a section.

This is an edited extract from From Bump to Birth, an ebook by journalist Louise Ní Chríodáin and Margaret Hanahoe, assistant director of nursing and midwifery at the National Maternity Hospital, Holles Street, Dublin. The book offers practical tips and advice for pregnancy and labour, along with insights from mothers and links to online resources.

Expert tips: A podiatrist on footcare
2

Conor Pope: My first Parkrun and it was mortifying
3

Recycling, reusing and reimagining rubbish into clothing and accessories
10