Penis cancer: have you heard of it?

The days of the ‘horrid stump’ are gone, with phallus-preserving strategies now in place 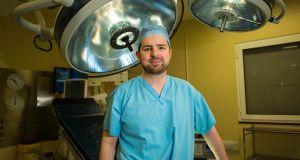 Dr Ivor Cullen: ‘Men were often being disfigured and their entire essence was being amputated.’ Photograph: Mary Browne

Have you heard of penis cancer? Although rare, roughly 50-60 new cases will be seen each year in Ireland. Until recently, the only treatment available in Ireland for many of the men suffering from this aggressive cancer was partial or complete penile amputation.

The devastating physical and psychological consequences of this cannot be understated, says the national lead for penis cancer, Ivor Cullen.

Cullen says this has now begun to change, and sophisticated surgical techniques can now be employed that will preserve as much of the penis as possible, allowing men who had penis cancer to not only survive, but live as normal lives as possible.

“The area of penis cancer has been totally neglected and there is a lack of education and understanding around it. Men were often being disfigured and their entire essence was being amputated,” says Cullen, who adds that due to a lack of accurate data, the true picture of penis cancer in Ireland remains unclear.

He returned from the UK last year to take up a post as consultant urologist at University Hospital Waterford (UHW), and immediately began lobbying for centralisation of penis cancer services to the southeast, saying he realised “a desperate need” for the service.

With his colleague, Padraig Daly, and the team at UHW, they began to establish the service from scratch. The demand was immediately evident and referrals have continued to build ever since – Cullen carried out 11 penis cancer conservation surgeries in the first two months of 2016, with referrals coming from as far afield as Mayo and Galway to his service in Waterford.

The urologist explains that heretofore penis cancer was “forgotten” and, unsurprisingly, Irish outcomes for the disease are massively out of sync with other western European countries.

Untreated, the highly aggressive cancer has a high potential for metastasis. Misconceptions about the tumour margins required, as well as concerns about excising all the tumour, meant that inevitably amputation was often the only course of treatment. Urologists would see only a small number of cases each year, Cullen explains. “There were no adjuvant services in terms of psycho-oncology, there were no specialists in penis cancer therapies, no specialised follow-up. As they were only doing one or two a year, no one became adequately experienced at it and no one really understood the holistic problems that these men had.”

The oncoplastic techniques Cullen learned in London allow him to remove the malignancy but also reconstruct the penis in such a way that it is not the “horrid stump” of days gone by.

“The whole idea of phallus-preserving strategies is that we can achieve effective cancer control while maintaining reasonable functional and cosmetic outcomes, which is common sense really.”

Penis cancers start mainly in the foreskin and grow progressively down; in some cases a radical circumcision is sufficient to remove the cancer, but when it has affected the glans penis, a glansectomy is often required, where the head of the penis is removed.

“We can then create a ‘neo glans’ using a skin graft from their thigh and graft it on – as a result, they still have excellent erectile function but they’ve lost some of the length and it looks a little different.”

The second most important factor for men is, unsurprisingly, sexual function; the phallus-preservation and reconstruction techniques employed by Cullen, however, mean that patients can continue to have satisfactory sexual relationships following the surgery.

“The disfiguration of a cancer diagnosis combined with the complete demasculinisation of such extreme surgery is awful so leaving them with an erectile functional phallus means that a lot of my patients, especially the younger ones, will go on to have satisfactory sexual relations after their cancer surgery.”

In the few cases where the entirety of the penis is affected, such as when the cancer is discovered at a later stage, a complete amputation will be necessary.

“In that situation, rather than leaving their urethra out of the stump that’s left, we will re-route it down through the perineum and they will void in a sitting fashion,” explains Cullen.

Penis cancer is linked to human papilloma virus (HPV), the same virus that causes cervical cancer in women, and anogenital warts in both sexes.

While not all cases of penis cancer are due to HPV, Cullen is of the opinion that boys should be offered vaccination in addition to girls, as is the case in the majority of other western countries.

The other main risk factor is phimosis, or extreme tightening of the foreskin, where there is an inability to retract the foreskin over the head of the penis.

Cullen explains that over time, the inability to maintain good hygiene of the area can lead to infected secretions and a cycle of inflammation and healing, which in time may manifest as a penis cancer.

“It is virtually unheard of in the Jewish population, for example, but that is not an argument for widespread circumcision as it is so rare.”

The problem, as with many predominantly male health issues, is a lack of awareness and openness. As Cullen succinctly puts it “no one famous ever died of penis cancer”.

The data shows that the cancer seems to affect single men more, and this appears to be because this population are stereotypically doctor-averse, meaning they may not seek help for a problem until it is too late. In addition, the disease isn’t one that GPs are used to seeing, and misdiagnosis or delayed diagnosis can occur.

Cullen is keen to emphasise that education of all healthcare professionals will be necessary to improve early detection and timely management.

“Often men come in with lumps on their foreskin and red patches on the head of their penises. The vast majority of the time they are given antifungal treatment for what the doctor sees as an infection. But if it doesn’t clear up within a week or two, it needs to be biopsied by a urologist, no questions asked. There is no normal lump or red patch.”

Formal centralisation of the service in Waterford has still to be achieved and Cullen admits that a certain amount of investment is needed in order to provide the full complement of services to men being treated for this devastating disease. He acknowledges that the National Cancer Control Programme has recognised a need for centralisation of this rare cancer and supports the project.

Awareness is the key issue for the cancer that dare not speak its name.

“The message needs to get out there that it can exist, and that it isn’t a death sentence as we can get impressive cure rates with aggressive surgery.

“People need to talk about it because the sooner we find out about it, the more options we have in terms of surgical techniques that will preserve the penis, and sexual and urinary function, as much as possible.”