What will new regulations mean for early years services? 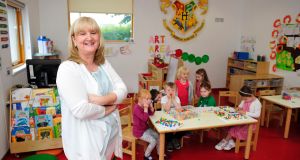 Three years and one month after secretly filmed footage in three childcare centres shocked the country and highlighted the urgent need for improved standards, new regulations for early years services will come into effect from June 30th.

This is before the introduction this September of a second free pre-school year under the Early Childhood Care and Education (ECCE) scheme for all children aged between three years and 5½ years. The number of children benefiting from the scheme is expected to increase from about 67,000 to 127,000 by April next year.

“Haunting images that will strike terror into every parent” was how the then minister for children, Frances Fitzgerald, described scenes in RTÉ’s Prime Time documentary “A Breach of Trust”, which was screened on May 28th, 2013.

Coupled with the revelation that three-quarters of early years centres inspected by the Health Service Executive (HSE) had not met required standards, the State stood accused of having only light-touch regulation at the expense of children’s rights.

Tusla, the Child and Family Agency, has since taken over responsibility from the HSE for inspecting early years services and is changing the process, which will reflect these new regulations.

So what’s different and what will these regulations mean not only for the operators of early years services but also parents and, most importantly, their children?

One of the most important changes (see panel) is that somebody can no longer set up a creche and only then notify the authorities. A centre must apply for registration and be inspected before it can open its doors to children.

“All services, from the time they open, will be required to meet a certain standard so the quality and safety of them will be higher before they start,” says Brian Lee, Tusla’s director of quality assurance.

The introduction of this registration system has meant that the approximate 4,500 existing services had to apply, in the words of Early Childhood Ireland chief executive Teresa Heeney, “to be deemed to be registered” before June 15th, or undergo the new registration process. These existing operators will all have a registration inspection within the next three years, according to Lee. The regulations also strengthen requirements in relation to management and governance of services.

“I would expect better oversight,” he says, which would be welcomed by parents who were left wondering if the behaviour of staff they saw in the Prime Time programme could be replicated elsewhere.

Other new requirements include: a minimum level 5 qualification in early childhood care and education for all staff working with children (those due to retire before 2021 are exempt); provision of an outdoor area; notification to Tusla within three days of “incidents”, such as injuries requiring medical treatment; staff induction and continuous professional development and a raft of written policies, including a complaints procedure.

“The Department is currently seeking legal advice from the Attorney General’s Office,” the written statement continues, pointing out that all early years providers are bound to comply with the Children First guidelines.

But the children’s charity Barnardos is not happy, noting the absence “with some dismay and disappointment”.

“This is a very serious issue for us,” says Barnardos early years development project manager, Heino Schonfeld. “It should be for all of us, because these children are particularly vulnerable. They are very young, some of them are not verbal and, as it stands, Tusla is not inspecting early years services for child-protection policies.”

It is a “significant gap”, agrees Heeney. While she believes all childcare services do have a child-protection policy, “it is very problematic that the State inspectors going into services don’t have the authority to look for it”.

However, Lee wants to reassure parents that the regulations do require a high level of child-protection practices, such as prior vetting of all staff, and this will be a core part of the new inspections, even if a service cannot be checked for its written policy. He also says that a parent can report the lack of a safeguarding children statement in a service to another arm of Tusla.

“The regulations are more modern and more demanding and they will reassure parents and make those services safer for children,” says Schonfeld. But, noting that Tusla has put “huge effort” into briefings for providers of early years services, he wonders who is telling the parents about it?

“Nobody is having a media campaign telling parents about the new regulations and where to find the new inspection reports; it’s a real blind spot that.” The attitude, he suggests, is that parents are not interested and just want their children minded while they go to work “but we are far beyond that”.

Lee acknowledges more communication with parents is needed and says it is something Tusla will be doing over the coming months. “The key bit for parents is obviously that they know what the regulations mean, but in particular we also need to make it more user-friendly in relation to accessing [inspection] reports and we are still not quite where we want to be in relation to that.”

Schonfeld says a second concern Barnardos has is that the opportunity was not taken with these regulations to at least start aligning the new, education-focused inspections by the Department of Education and Skills (DES) of centres operating the free pre-school scheme and the statutory inspections by Tusla.

There is anecdotal evidence that conflicting recommendations can be made by the two inspection services.

In one example cited by Heeney, an early years service in Limerick was told on a Thursday by DES inspectors that its outdoor play area was a wonderful approach to children’s play learning. The following week, the Tusla inspectorate deemed the same outdoor area to be “serving the health and safety of the children poorly”, she says. “I know the two of them have different lenses but the children have the one lens.”

According to Lee, “Tusla has the only statutory regulatory function in relation to early years services. DES inspectors look at curriculum and other things but it wouldn’t have the same volume of inspection work as we have, and we would be the ones registering services and issuing statutory actions upon them if they are not compliant.” In the long term, he believes it would be beneficial to have much closer links between the two sets of inspection, “or merge them completely”.

With the help of increased funding and staff, 2,302 inspections were carried out in 2015, up 75 per cent on the previous year.

The target is to inspect centres on average every 18 months but they are moving towards an “intelligence-driven model”, Lee explains, where various sources of information will be used to determine if a service is at more risk than others. “We want to focus our efforts on the services we are concerned about.”

Although the new regulations were long overdue, Lorna Clarke, managing director of five Pugwash Bay childcare centres in the northeast, has no doubt that the impetus was the “can of worms” opened by the Prime Time programme, and that upsets her. “It was needed long before that. It took something like that to give the sector a kick in the backside, basically, and people started to take notice.”