Children are well able to discuss what types of learning they like, says Ombudsman for Children 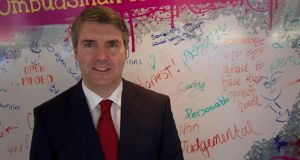 Niall Muldoon, the Ombudsman for Children, is determined to listen to children’s voices.

With the proposed introduction of a parent-student charter in all schools, cynics may question what sort of meaningful contribution young children can make. Give them their way, wouldn’t it be all about fewer lessons, longer break times and free pizza for all on Fridays?

People can be sceptical, agrees the Ombudsman for Children Niall Muldoon, but he believes it is crucial that every effort is put into the harnessing of children’s voices.

“What we have to recognise is that we have failed miserably in listening to children’s voices over the years. Now there is a constitutional imperative that we have to listen to the child, individually, collectively, and I think this is an ideal opportunity for that to happen.”

It is important, he says, that children know they can make a complaint and that they have some input into the way a school is run.

Indeed, he is concerned that in some talk about reforming the Education Act, such as in “A Programme for a Partnership Government”, references have been made to simply a “parents’ charter” and he is determined that the children’s aspect is not downplayed.

“The whole idea of the charter is to improve relationships across the whole school body. You have got to have young people involved in that, no matter what the age, there is always a way of doing it and always a way of improving how you do it.”

There are many schools where they listen to children extremely well, he says. This can be done both formally and informally.

“Teachers and the people on the ground know how to do this,” he says. “People shouldn’t be sceptical.”

The National Parents’ Council, through its “Action Team Partnership” initiative with the Irish Primary Principals’ Network, has seen “quite dramatic outcomes when a child has a voice about his/her own learning and how that learning might change”, says chief executive Áine Lynch.

“Talk to any parent about a four-year-old and [ask] do they have an opinion about things that matter to them in their own life, very few parents would say no,” she says. And eight-year-olds are well able to discuss what types of learning they like.

“This middle age group gets dismissed as ‘too young to know’. The reality is that parents and teachers who work with children are acutely aware of the fact that they are very clear about what they think.”

It can be more challenging to capture the thoughts of young children, she says, whereas with older children you might put them in a focus group and ask them questions.

For younger children it might require art work and drawings.

“But the outcomes of including them are so much greater,” she says, “if we make efforts to hear those voices.”