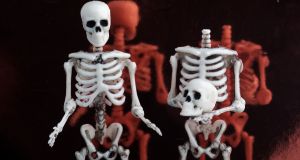 No news. None at all, is what I say. In fairness, though, that’s not entirely true. Recently our four-year-old has taken a shine to an inflatable skeleton. Photograph: iStock

On the phone my mother asks if I have any “news, gossip or scandal”.

What are these strange words? News. Gossip . . . scandal?

Even under the best circumstances I never have any gossip or scandal to share, but news? Sure, sometimes I have news. Just not right now. Or at any time over the past 12 months.

What do people talk about now, anyway? It’s gotten to the point where I can’t even remember what we used to talk about. What did we ever consider “news”?

A while ago I was busy with my daily, dead-eyed doomscrolling when I happened across a meme that spoke brilliantly to this new social quirk. It was a video with a caption that said “Me when we’re allowed to meet people again.” The video itself was a super-cut of all the questions host Jonathan Frakes asks at the beginning of that old Ripley’s Believe It or Not show.

Without taking a breath he rattles off questions such as:

How much money would it take for you to spend the night in a cemetery?

Do you have a pet?

I made this for no one and no reason. Plz Enjoy....

Have you called a plumber lately?

Have you ever visited a truck stop?

Have you ever had the desire to write your initials in wet cement?

Do you have a sweet tooth?

Do you believe in the power of a curse?

Can you remember the tallest man you’ve ever seen?

It is a top-tier meme; one that thoroughly deserves the sharp exhalation of breath out of my nostrils I bestowed upon it. It works on a couple of levels. First of all, imagining someone in the pub, just so excited to be around other people again that they can’t control what they say is just plain funny. But it’s also funny for the questions it doesn’t ask. Namely, what the hell are we going to say to each other when the time comes? Will we have to relearn to socialise normally; to have full-blown conversations that don’t take place on WhatsApp? Who am I? What have I become?

So these days, when someone asks if I have any news my initial response is no. Having never possessed the gift of small-talk, I’m now truly at a loss. I don’t know if it is down to spending a year almost exclusively in the company of tiny children, or maybe it’s another widely-felt consequence of lockdown. Either way I’m sure sociology students of the future will have a ball exploring the myriad and unexpected ways this virus wreaked havoc on our minds.

No news. None at all, is what I say. In fairness, though, that’s not entirely true. Recently our four-year-old has taken a shine to an inflatable skeleton. Calling him Jerry (which I think is a perfect name for a skeleton), our son dresses him, plays with him, and sets a place for him at dinner. For someone who doesn’t move, Jerry makes a hell of a mess, but it’s nice to have someone else at the table.

Mispronouncing his name, our two-year-old calls him “Terry”, which is somehow an even more perfect name for a skeleton. As I write this, Jerry sits awkwardly slumped on the couch, staring vacantly at the ceiling. What will become of you, Jerry? Will the kids remember you? Will anyone? Will you end up in the attic or the bin? Will anyone care? This might be the lockdown talking, but I think I will. I will be sad if I see you crumpled and dumped in some future spring clean. But I will remember you, Jerry. You are more than the cheap piece of tat people mistake you for. You have become for me the manifestation of the thousands of tiny moments that make this life beautiful; moments we’re all too quick to forget. So as God is my witness I vow to remember.

That’s what’s going on in my life right now. It’s not really news, though, is it? When someone asks if you have any news, you can hardly say, “Well, after my son started dressing an inflatable skeleton I began to develop a poignant affinity for it, leading me to question the very nature of memory and the relentless passage of time.”

What else? Yesterday I experienced two minutes of silence. Even as it was happening I knew something must be wrong, but I enjoyed it nonetheless. Investigating the source of this blessed moment of quiet, I found my daughter had opened a bottle of nail polish and had been busy attempting to apply it to her own tiny fingernails. In a manner of speaking she had succeeded, but she had also completely covered the top third of each finger in deep, gloopy red. Holding her hands up proudly for me to see, looking like she had just committed some terrible crime, I could only laugh. She’s proving to be not unlike the raptors in Jurassic Park in her unnerving ability to open things we’re sure are beyond her ability.

The next time you bump into me on the street and ask if I have any news, don’t be alarmed by my vacant expression as I look beyond you to the distant horizon. I’m just thinking of dear old Jerry, and all the wonderful not-news news I have in my heart.

Should I share it or not? That is the question.