Schools reopening have me lying awake at night – again 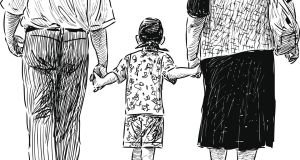 Typically through term time we don’t see very much of my parents or parents-in-law. Photograph: iStock

Insomnia has kicked in again. I’ve been plagued with it over the course of the pandemic as hundreds of thoughts race around my head just as my head hits the pillow.

Worries about home-schooling, keeping the family safe, relatives that were outside of restriction permitted travel zones, juggling work and home commitments, and no end date to ultimately work towards kept me awake for hours at a time or, at best, permeated my dreams.

Reprieves were felt over the summer as we progressed through the phases. Emotional reunions followed, and a promise not to take things for granted again. But after a short-lived freedom, we were back to not being able to see one set of grandparents again as they came under local lockdown.

“We’ll be down one of the days next week,” I said to my mother on the phone in what seems to have been a fate-tempting conversation. “Great,” she said, “just let me know what day and I’ll get something in for the kids to eat.” I mentally high-fived the air grateful at the thoughts of having to make one less dinner. Later that evening, Taoiseach Micheál Martin announced local lockdown restrictions for Kildare, Laois and Offaly.

My parents-in-law came for a visit at the weekend, bearing dinner (I try not to view both sets of grandparents’ concern with feeding my family as a slight on my limited culinary talents). The gratitude was enough to make me almost forget the social-distancing guidelines, but an elbow bump had to do instead of a hug. They also brought a gift for a grandchild, whose birthday was still some weeks away. “You never know how things will play out,” my mother -in-law explained, voicing the concerns that were already in my head.

It’s the uncertainty that’s playing havoc with my sleep. With just days to go until the schools reopen, all that seemed so familiar now appears so different. And it’s the new juggling that is keeping me awake.

The pandemic has made me see even clearer what the priorities should be. My children will thankfully return to school without having experienced the loss of a loved one from this horrible disease. Not all of their friends and classmates have been so lucky. Typically through term time we don’t see very much of my parents or parents-in-law. Life is so busy, there are matches to go to, swimming lessons to attend, drama practice to make and wet evenings to spend on the football training sidelines. And among all this there are mundane practicalities and demands of daily life to fit in – and of course work.

It’s sometimes only when the option is taken away that you fret most for it. Our families live in the same country as us, yet I often think we’d probably see more of each other if they were on the other side of the world. Cousins who adore meeting up don’t get to do so nearly often enough. The busyness of life has too often got in the way of visits. It’s something I’m determined to change whenever the post-Covid era arrives.

But in these coronavirus times, the busyness looks certain to step up a gear. Just getting the children to school will require military planning and a lot of luck. With staggered drop-offs and different schools to contend with, it will be a delicately balanced operation. And though not always the case, it’s likely to be women who will bear the brunt of the necessary juggling. And it’s likely to be women who may have to consider which takes precedence – their jobs or their children’s education. An even more difficult decision to make when the bills still require paying.

I’ve resorted to drinking coffee – I hate the stuff, but slumber still evades me most nights, so needs must.

“Who do you think would win between a megalodon and 100 sharks” the second youngest asked as I typed away on my laptop.

“Eh, possibly the sharks,” I replied trying not to lose focus. “The numbers advantage would probably serve them well.”

“Can you get a picture of a megalodon on your computer?” he asked, determined to prove me wrong. “Look how huge it is. He could swallow 50 normal sharks in one bite, I think.”

“Yeah, megalodons don’t exist anyway,” I continued, trying to get back to work. It was too late, he was ready to debate the issue.

And for a brief moment as he chatted, I thought about the silence that will befall the house for a few hours each day in September. It’s going to take another adjustment. I’ll probably lie awake thinking about it tonight, in between the permutations and combinations of sharks and megalodons.