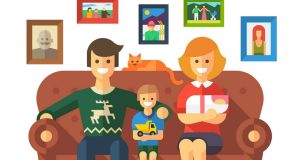 Cost of childcare raises questions over whether it is ‘affordable’ to work. Illustration: iStock

Stay-at-home father: I think it’s a shame if both parents have to be out of the house for 10 or 11 hours straight

Philip Roe and his wife have two boys, aged five and three, and live in Shankill, Co Dublin. He is temporarily a stay-at-home father “by circumstance, not choice”, while seeking work, and his wife works full-time outside the home. The couple had moved to the UK in 2009, one month after getting married, going to where the jobs were. An art history graduate, he worked in a large London museum for nearly six years, co-ordinating the loan and exhibition of artworks.

Last summer they decided to move back to Dublin, although he had only a fixed-term, one-year contract at a gallery lined up.

In retrospect it was “a rash, rather over-optimistic move”, he says, “but our main motivation was to bring up our boys back home in Ireland, close to their grandparents”.

“I have been seeking work elsewhere in Dublin since June, and am looking after the boys throughout the week. We’ve temporarily swapped roles, in that my wife, who had been a ‘stay-at-home mum’ for years, recently started a one-year contract in a library – and so far, so good.”

While he is looking forward to reviving his career in a gallery/museum, “for my own interest and self-esteem, as well as the obvious financial need”, the plus side is that he has found spending more time with his sons great fun – rather than having “just an hour or two in the evening, by which stage everybody is cranky”.

“I know it’s the norm these days – and that many couples have no choice, with massively high rents and mortgages to pay – but I think it’s a shame if both parents have to be out of the house for 10 or 11 hours straight, five days a week, and kids spend most of their time in creches or after-school care.”

The cost of childcare is also a big factor in their decision-making because neither of them works in high-earning occupations, so if they both had full-time jobs, a huge chunk of their joint income would go towards childcare.

“Under the circumstances, it seems to make as much economic sense for one of us to stay at home – and I think it’s much nicer for children to have a parent around most of the time, if possible, to collect them from school and so on.”

He doesn’t think any parent should be dissuaded or prevented from working outside the home due to prohibitively expensive childcare, so he regards State subsidies to reduce that cost as fair enough.

“On the other hand, the Government just wants to increase employment and maximise productivity/profit, and I feel that people’s quality of life isn’t factored into such equations, ie if given a choice, and if financially feasible and more socially ‘acceptable’, many parents might prefer to spend less time working and more time with their families.”

He was, as it happens, offered a job in Oslo in the summer – “but idiotically turned it down, as we stubbornly try to settle in Dublin” – and that employer stressed how staff were allowed leave around 3pm during the summer, to spend more time with friends and family during their brighter, warmer months.

“Here, you are made feel like a ‘slacker’ if you ask for more flexible, or simply fewer, working hours. It is difficult to find any sort of stable, secure employment – and unless you’re on a permanent contract and/or have been at the same workplace for years, it’s very tricky to negotiate better conditions.

“A little leeway from employers, taking basic family commitments into account, would make a big difference.”

Mother who works from home: ‘When my working day is done, I am done – my commute is a flight of stairs’

Maria Keane works full-time in paid employment from home in Cork city and has a nanny who comes to the house to mind her two sons, aged three and 19 months. She and her husband used to live in Dublin but found it “simply unaffordable” when trying to buy a house, being outbid on a succession of properties.

“We were faced with moving quite a bit out of the city and even longer commutes/time away from the kids, which are a killer for me as I already spend a fair bit of time on the road for work.”

Her employer is a not-for-profit organisation that brings North American students over to study at universities around Ireland.

So when her husband was offered a transfer to Cork, she told her employer of five years that she would like to continue to work for them from home but that the family was relocating anyway, whether or not she could keep her job.

“I was lucky that the organisation agreed to me working from home the days I don’t need to be on the road, so I get three or four days at home most weeks, and I can mostly manage my diary myself.”

Best of both worlds

However, there are challenges too. “I have no time to myself – not even the drive to work, or a lunch break.”

It can also be very isolating. “Some days I don’t leave the house or talk to anyone except my husband, nanny and kids. When my husband comes in the door I am dying to chat, but he’s all talked out after being in a busy office.”

Weekends are taken up with getting household jobs done, so it’s hard to find time for meeting friends.

“When I worked in an office, I found I could meet people for lunch or after work the odd time.”

The blurring of work-home boundaries is also a double-edged sword.

“It’s too easy to just nip into the office in the evening to get something finished. But, likewise, I am more in control of my working hours, so if something comes up during the day, like an appointment for one of the kids, I can normally take them to it knowing that I can get some work done later that evening.”

She has no personal experience of the so-called “mummy wars” and believes every mother does her best.

“There are days when I would love to be a stay-at-home mother but, all in all, I think working is right for me.”

Falling between the cracks

“There seems to be a real lack of understanding of the costs faced by families. At the moment, I barely break even with work.”

The focus of Government policy really seems to be on childcare centres she points out, yet when they were in Dublin her eldest son never settled in the creche there.

“We’ve since found out he has ASD [autism spectrum disorder], so can see now that the creche wasn’t great for him as he finds social situations stressful. He is best off at home, with a few hours of socialising with peers a week.”

Any sort of subsidised system should apply to whatever arrangements the family chooses, she says.

“The threshold should be high enough to actually encourage people to work, and to progress in their careers without having the subsidy cut off due to higher earnings. One of the main reasons I work is so that when my kids are in school I will still have my job.”

While some days she curses having to drive to Belfast for a meeting or board a plane to the US, “on the whole, I like what I do – I just wish I earned enough for it to make complete sense for me to work, because at the moment it can be hard to justify”.