While chores may prepare children for life, for some parents it's not worth the hassle 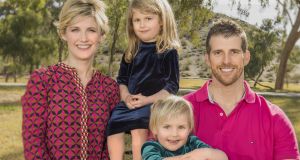 Laura Steerman and family: “We’d all rather spend time at the park or playing, doing arts and crafts or just chilling, rather than dusting the shutters or giving the bathrooms a heavy clean.”

Most of us remember doing jobs around the house as we were growing up and many parents will have instilled the same work ethic into their own children by teaching them the need to pull their weight, tidy up after themselves and make a contribution to family life – no matter how small.

However, according to an online survey, only 33 per cent of modern Irish parents expect their children to do any sort of household chores, with the majority saying their youngsters are too busy with extra-curricular activities to help out.

Most of the time, it’s just not worth the hassle of having to listen to their protests

Joan McCarthy has two teenage daughters, Leesha (15) and Chloe (13), and says both have too much going on in their lives to help with washing, cooking and tidying.

“I don’t really ask the girls to do anything as they are both very busy with school, sport and keeping up with their friends,” she says. “I know I should probably be making them help out around the house, but to be honest, most of the time, it’s just not worth the hassle of having to listen to their protests.

“They are only going to be young and carefree for such a short time and I would rather that they enjoyed their time and can look back fondly on it.”

“A family is comprised of all the members who live under the same roof – so all share in the benefits of that living arrangement,” he says. “All should and must contribute to the upkeep of the home and the duties that make it possible. There is no opt-out clause. Everyone must contribute and that means everyone must have a role to perform. No exceptions.

“It is a parent’s duty to prepare children for life lived independently. That means learning how to load a dishwasher, turn it on, sort laundry, do laundry, prepare a simple meal and sort and organise clothes and belongings. If a parent doesn’t live up to that duty they help create inadequate children who will grow to be inadequate adults.”

But McCarthy says asking her children to do even the smallest task takes so long that she ends up doing the job herself.

“If I ask one of them to hang out the washing, she will take so long and peg the clothes up in a ridiculous fashion that I have to go out and do it myself afterwards,” she says. “The same goes for stacking the dishwasher or doing a bit of hoovering – there is always so much sighing and moaning about it, that I don’t even bother asking anymore.”

Dr Carey says this is entirely the wrong approach. “This is utter nonsense,” he says. “Everyone must contribute by having a chore that is doable according to their age and developmental level. If a child does a chore poorly, it is the parent’s responsibility to teach them how to do it correctly.”

Laura Steerman also has two daughters, Adelaide (6) and Lila (4) and a baby son Eoghan. She does not believe her children should have to do jobs and would prefer them to spend their time playing.

“My girls don’t do chores and I don’t expect them to,” says the Dublin businesswoman. “They have busy little lives between school, Montessori, play dates, activities and time spent just ‘being kids’. They are only small for such a fleeting amount of time and there’s so much they love to do so it doesn’t seem to be a fun or constructive use of their time to work around the house. Even I believe life is too short to be doing chores – so I have a weekly cleaner coming in to help out.

“We’d all rather spend time at the park or playing, doing arts and crafts or just chilling, rather than dusting the shutters or giving the bathrooms a heavy clean. That’s why we have a cleaner – it’s not a laziness thing but about quality of time spent together and the most fulfilling use of our energy. With two working parents and a young family, we need to value our time and use it wisely.”

But while the mother of three says she may ask her children to do some light chores as they get older, she says she practises what she preaches as she also avoids housework whenever possible.

“As the children grow older, we may introduce some chores into the mix as it’s only when they are over eight that they can comprehend that keeping their bedroom room tidy is as much about cleanliness as self-respect,” she says. “As they mature into tweens perhaps I could sell the idea that doing some chores (not everything) can be an important life skill. But for now I’d rather kids be kids and spend time exploring their world.

“I feel it would be unfair to deny them a playdate or stress them out just because they had a list of chores to complete. Particularly as even we [their parents] would leave behind the dirty dishes to go out to the cinema – so we don’t treat them any differently.”