Is my son’s imaginary friend a real problem?

If you have a parenting query, send your question to health@irishtimes.com 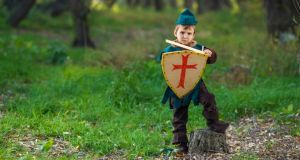 My five-year-old son is an only child. Since he was about 3½ years old, he has had imaginary friends. He goes through different phases and different friends. Sometimes he would have animal friends similar to his soft toys and recently he has had a imaginary friend called “Jack” who he imagines to be a boy about his own age. He introduces Jack into the conversation lots of times telling us what he likes and dislikes and what they play together. Sometimes when I watch him (when he does not know he is being observed) I see him playing with Jack, doing imaginative games with him and it all looks like fun. However, sometimes I still worry as to whether it is fine. When I search on the internet, all the advice is that imaginary friends are fine for kids, are no problem and good for children, but I worry that it is because he is an only child and has no brothers and sisters (I was part of a large family). We do make sure that he has regular playdates and is involved in activities with lots of children but still maybe he needs more. The other day, I was busy when he asked to play with me and he said he would “play with Jack” instead. I felt guilty that he had to resort to his imaginary friend. Is all this okay? Otherwise, he is a delightful fun boy who is full of enthusiasm for everything.

Imaginary friends in young children are common with as many as 60 per cent of children going through a phase of inventing an imaginary character in their lives that they talk about and play with. Playing with imaginary friends is similar to children playing creatively with teddies or dolls (perhaps imagining a tea party or going on an adventure) except that they don’t need the “prop” of the doll to engage in the game.

The benefits of imaginary friends

Historically, it used to be thought that their might be problems with having an imaginary friend, that perhaps it suggested the child could not separate fantasy from reality or that it might affect their ability to form real friends but none of this is born out in the research. Careful studies show that children know that their imaginary friends are “pretend” and even indicate children with might imaginary friends might grew up with with better social skills than those without. In addition, some studies suggest that having an imaginary friend might provide a buffer against stress for children dealing with challenges such as parental separation or bullying. In these situations children might “talk out” feelings with their imaginary friend or rely on them for an escape from stress.

As a result, imaginary friends are best seen as a sign of a creative and playful imagination that can have lots of benefits for children. In addition to dealing with stress, being able to imagine play friends can help develop children’s cognitive and creative skills, allows them to practise and rehearse social skills, and provides them with a relaxing way to play.

Imaginary friends and your son

There is some evidence that eldest or only children in families engage more in creating imaginary friends which is perhaps understandable when you think they might have less opportunity to play with children their own age in the home. Rather than this being a problem (or feeling guilty about it as a parent), I would see this ability as a resource for your son. All children have to learn to play by themselves at times and this is an important life skill for them to learn. In the modern world, there seems to be an obsession with over-structuring children’s lives and “filling every moment” with an activity. However, children benefit as much if not more from unstructured play times when they have to create, imagine and plan a play activity by themselves. This fosters creativity, a vivid imagination and independent thought. They might initially complain about being bored and unsure about what to do, but given space, time and encouragement, watch what they come up with on their own.

Connecting with your son’s imaginary friend

A great way to understand your son’s thoughts and inner world is to connect with his imaginary friend. When he mentions Jack, you can ask “how is Jack today?” or “what did the two of you play today?” This gives you a chance to enjoy his imagination and join in on his fun world. In addition, talking about his imaginary friends can give you a sense of what your son might be concerned about. For example, if something happens or there is a problem, you might ask “What does Jack think?” or “Why does he feel that way?” This can reveal your son’s own thoughts and feelings as he might be projecting these onto his imaginary friend.

Occasionally, there might be problems with imaginary friends that can be easily dealt with. For example, if you son says “Jack says, I don’t have to go to bed”, you can say “You don’t have to listen to Jack, he does not decide bedtime in our house” and then deal with the issue in a normal way. Or if you are concerned that your son might talking too much or becoming obsessed with Jack, you can set some rules or boundaries around his presence. For example you might suggest “I think Jack might need a break (or go back to his own home for a while)” or “lets agree that we have a family dinner without Jack here today”.

Dr John Sharry is a social worker and psychotherapist and co-developer of the Parents Plus Programmes. He will deliver a talk on Promoting Positive Self-Esteem in children in Dublin on Wednesday, May 10th. See solutiontalk.ie for details