How do you parent?

When a couple is planning to have children, they should discuss their views on parenting, before the birth 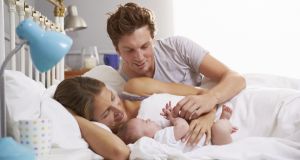 How we ourselves were parented tends to be a dominant influence, even if it means resolving to do exactly the opposite of our parents, says Heino Schoenfeld, early years development manager with Barnardos Ireland. Photgraph: iStockphoto

It was during the throes of premature labour with her first baby that Ollwyn Moran realised “being a parent isn’t about me any more – it is whatever is best for the child”.

During her pregnancy she had drawn up a birth plan – “natural birth, no drugs, yada, yada,” she recalls. But when Matthew, now age 11, decided to come seven weeks early, the doctors were hooking her up to an epidural because the labour was going too fast and was likely to stress the baby.

The manner of Matthew’s entry into the world – followed two years later by his brother Alex’s even more premature arrival at 30 weeks – certainly shaped her parenting. But it was added training she did as a secondary school teacher, in restorative justice and neurological development, that she believes “massively informed” the sort of parent she became.

“I think I am a calmer parent than I thought I would be because I understand the neurological side of things,” says Moran, who was on RTÉ’s Dragons’ Den recently, where she turned down Gavin Duffy’s investment offer for her CogniKids business that sells baby products designed to encourage brain development.

“From the restorative side of things, I understand when behaviours are being displayed how important it is to take a step back and say it’s nothing personal. It’s something they are going through that they can’t find the words for, or they need support

“Being a mother of two boys, I am super mindful of the fact that boys need to be able to cry and to verbalise their feelings and I have worked really hard with my boys on that.”

At their births she wasn’t to know that a decade later she would be divorced from their father and parenting alone. With him living in the UK, she describes herself as “mum and dad in the house”, in Templeogue, Dublin.

Our education and life circumstances are just two of many factors that affect how we raise our children.

How we ourselves were parented tends to be a dominant influence, even if it means resolving to do exactly the opposite of our parents, says Heino Schoenfeld, early years development manager with Barnardos Ireland.

To parent differently from the way we were parented “requires us to be very reflective as parents, and challenge our own assumptions and experiences – and that is the difficult bit,” he says.

Few of us consciously adhere to a set style, although four broad categories of parenting have been identified: authoritarian, authoritative, permissive and uninvolved (see panel).

One of the authors of that report, Elizabeth Nixon, an assistant professor in developmental psychology at Trinity College Dublin, says those findings are reflected in data from the Growing Up in Ireland longitudinal study of nine-year-olds, in which she is also involved.

When discussing these categories, she points out that parenting should not be thought of as “something parents ‘do’ to their children but in terms of a parent-child relationship”.

In real life, Schonfeld argues, parents are always on a continuum of styles and don’t fall into one category.

“Some of us parent differently in the morning when we have three to get out to school, than we do on a Sunday afternoon – so we are swinging between those types,” he says.

However, it is still helpful, he says, when you are reflecting on your parenting, to see where you are at, at any given time.

“On balance, the authoritative style would be best for children. It is the most credible one that children can understand and can predict how parents are reacting. The other two styles [authoritarian and permissive] can be very difficult for children to understand. There may be loads of rules but they don’t understand why the rules are there.

“The permissive one, though it can be very nice, can be confusing for the child and unpredictable.”

An extensive study by Iowa State University found that the health risk of harsh parenting increased as warmth from the other parent increased.

This highlights the importance of two parents trying to find common ground and to develop a unified approach.

Such a process “might be very useful for both of them because it will prompt them to reflect on their parenting and to challenge what they think is the right thing”, says Schonfeld. “They don’t have to be the same but the child has to be able to make sense of their behaviour.”

Disagreement between partners about how to raise their children is an issue that Bernadette Ryan deals with in her work as a counsellor with Relationships Ireland. If a couple has a different set of values as regards parenting, it can cause upset if they haven’t talked about it before they start a family.

Ideally, when a couple is planning to have children, they should discuss their views of parenting, she says, particularly on issues such as education and religion. This is encouraged as part of the pre-marriage course run by Relationships Ireland.

As we are likely to take our parenting style from our family of origin, “we all tend to think we’re right and this is the way to do it”, Ryan says. “It is about opening up and trusting the other parent.”

However, the demands of a newborn baby can get first-time parents off to a rocky start. Ryan recalls how she had her own views on equal parenting, before her first baby was born and nature kicked in.

“For the first three months the mum can be very protective and that is probably all biologically sound,” she says. However, it can be a disappointment to the father who wants to be involved. “But if he is patient, it will even out.”

The other thing new parents have to bear in mind is that it is not about them but what the infant needs, Ryan says, echoing Ollwyn Moran’s point. “If they are both attuned to the baby’s needs, that will go a long way to help, as opposed to ‘my turn’ or trying to be politically correct about it.”

Different stages of childhood bring different challenges to parents, with troublesome teenagers likely to put “a huge strain” on any cracks in a relationship, she warns.

“A lot of narcissistic people in our society today want their children to reflect them. Well, that can be a source of a lot of tension,” she adds. “Let it go.”

Kim Kardashian West at 40: How the queen of social media changed the world
4