Children and exercise: How much is too much?

We know exercise is good for kids, but too much can cause big problems 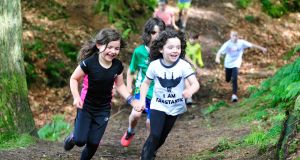 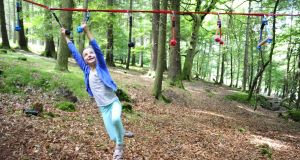 Freya Leonard has fun with the Trail Kids group in Cruagh Woods in the Dublin mountains. Photograph: Aidan Crawley 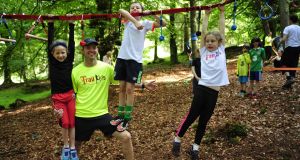 In our screen-saturated age, getting children and teenagers off the couch to do any sort of exercise is a constant challenge. But for a minority of youngsters, can there be too much of a good thing when it comes to sport?

With widespread societal alarm about overweight, inactive children, little attention is given to the other end of the spectrum. For the kids who are sports mad or those with sports-driven parents, too many hours on the pitch, the track, in the pool or the gym can take their toll on still-developing bodies.

Chartered physiotherapist Jenny Branigan of Total Physio in Sandyford, Dublin, is familiar with what she calls “ugly parent syndrome” – those over-invested in their children’s sporting prowess.

The biggest problem she sees is among really sporty kids, who may be playing hurling, football and rugby, because usually every team wants them. And they may be very flattered by approaches from more senior teams.

“If parents are very interested in sport, you will see that they are trying to push them because maybe they didn’t do so well themselves, and now they have a kid who is talented, they are trying to make sure that kid achieves what potentially they didn’t,” she says. It can be “tricky” for a physiotherapist trying to treat that child.

“Once the dad determined that I was going to try to manage the load, which might possibly mean he couldn’t be on the soccer team because the kid wanted rugby, you could sense a real change in the atmosphere. In fact, I didn’t see that kid again – and he had a problem with his knee that had been going on six or eight months.”

Knee pain, known as Osgood-Schlatter disease, is one of the most common “over use” problems for adolescents. Something similar and also quite common is Sever’s disease, which affects the heel.

“As the kid goes through a growth spurt, soft tissues get tightened where they attach to the front of the knee because the bone starts to grow quicker than the soft tissue can accommodate,” Branigan explains. “It normally develops as an aching sort of a pain and it is aggravated by exercise and once they stop playing they don’t feel it anymore.”

Sticking to one sport is also not recommended for children, as all the wear and tear is likely to be on the muscles and joints engaged in that activity and there is no “cross-training” effect.

When it comes to organised sport, the American Academy of Paediatrics recommends a day a week off and no more than five days a week of one particular sport. It also advises two to three months a year off that particular sport.

A rough rule of thumb that Branigan thinks is useful for gauging the maximum amount of organised sport a child should do is one hour per year of age per week. For small children, something like gymnastics training can become very intense too soon, she says.

However, every child is an individual and they all develop at a different rate, but really you want younger children to learn how the body moves through normal acts of play rather than organised sport.

For children involved in a lot of sport, the “burnout” signs to look out for include disturbed sleep and a reluctance to go to an activity they once loved.

Recovery time is crucial but a rest day doesn’t need to be sitting on the couch playing Minecraft, Branigan says, it just needs to be doing something different, such as going for a relaxing swim.

As well as recovery time, adequate nutrition and hydration are also important for preventing over-training problems in children, says Dr Clare Lodge, a chartered physiotherapist based in Stoneyford, Co Kilkenny.

“They are skeletally immature, trying to produce muscle and bone and get stronger, so adequate recovery is key – so [ensure] they get enough sleep for their age, that they are eating properly and getting all parts of the food chain. Also that they are hydrated adequately because dehydration can predispose to injury as well.”

Strengthening and conditioning can prevent sports injuries and in the US they are keen to start such training in primary schools. But that doesn’t mean dumbbells and bar weights.

For children, it involves using their own body weight to target the main muscle groups through exercises such as press-ups, squats, lunges and pull-ups – “old-fashioned moving your body against gravity”, says Branigan.

Long-distance road running should also be off-limits for children as they have growth plates in their bones that don’t seal until about 18 years of age, says Lodge, so running and high-impact exercise can be detrimental if done to excess.

Such guidelines have to be used in conjunction with a view of the individual, past sporting activities, medical history, and so on, Lodge says. The same goes for judging when older teenagers are ready to start working with weights.

“They are still developing and growing until they are about 18, generally speaking. Beyond 18 – up to about the age of 25 – their bones are still mineralising, which means the bones are trying to get stronger,” explains Lodge, who lectures at Carlow Institute of Technology, where she is involved in a research project on injuries among adolescent males in GAA.

Local authority gyms such as those run by Dublin City Council are popular with teenagers. But the 13-18 age group is restricted to the cardio-vascular equipment such as treadmills, exercise bikes, cross-trainers and no weights, says the manager of the Ballyfermot sports and fitness centre, Don Daly.

“Our gym does a programme on Saturdays where we would do small weights with them but that is a supervised class and they would have to be 16 to do that.”

Adam O’Connor, an instructor at Ballyfermot who has just completed a course on child and teen fitness, sees a wide range of abilities in the youngsters at the gym. He tells even those who are “as fit as a fiddle” that they need to take days off “to let their body recover and grow and let their muscles get back together” – especially if they are just starting out.

“There is no point in coming to the gym seven days a week and burning out after a week or two,” he says. “Sometimes they go too much and lose interest in it; it’s good to keep themselves hungry.”