No age barriers to cycling in Copenhagen 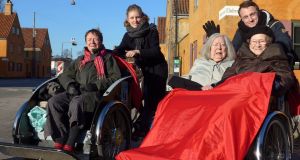 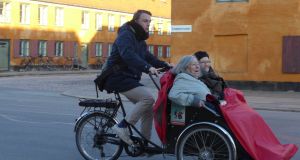 Helle, on the left, and Birthle go for a cycle with their pilot, Theis. Photograph: Derek Scally

It’s a blustery spring day in Copenhagen and Birthle, an elegant older woman, is waiting impatiently with her coat on to go for a bike ride.

Birthle is 99 years old and though she looks years younger, she is not planning to cycle herself. Instead she is waiting in her care home’s lobby for the arrival of her pilot, a cheery young man called Theis.

He is a volunteer with “Cycling Without Age”, a programme that began life here four years ago and has since taken the world by storm.

It brings together able-bodied cyclists with older passengers who fancy a spin around the city.

Just after 2pm, Theis shows up with his vehicle: at the back a regular bike, up front a two-seater bucket-seat rickshaw. It has an electric motor, cushions and seatbelts – and a blanket if Birthle wants it. But Birthle doesn’t want a blanket, she wants to get going.

“I’ve been cycling all my life, I still feel it in my legs, so it’s wonderful to be cycling again when you’re almost 100,” she says.

With a few cheery words of greeting, Theis helps Birthle and Helle, aged 93, into the rickshaw. With little fuss, the three are off down the road and into the park.

The older man’s tan suggested he liked the outdoors, and made Kassow think of pictures he had just seen of a pre-war, bike- filled Copenhagen. Perhaps this man used to be one of those cyclists, he thought, but had, like many, given up cycling with advancing age for fear that his slower reactions would lead to accidents.

One morning on a whim, Kassow showed up at the care home with a rented rickshaw and offered to take a resident for a spin. One lady, Gertrude, was game. The next day, her carer called Kassow, asking: “What did you do to Gertrude? Now all the other residents want a ride, too.”

Kassow rented the rickshaw again and began giving residents rides in his spare time. “I made many unlikely friends; I felt like a time traveller,” he says.

In October 2012, he emailed the city of Copenhagen explaining his project and asked for support. His email landed with Dorthe Pedersen. At the time she was working for the city health department, anxious to promote active citizenship and bridge the gap between public healthcare institutions and civil society.

It is a gap that is particularly wide in the area of elderly care, she says, and doubly so in Denmark given its strong welfare net.

“In Denmark we lean back and rely on public services to take care of us, but I was interested in finding a way for people to influence their own communities from the bottom up,” she says.

Kassow’s cycling project was just what she had been looking for, she says, merging private and public sector involvement into a third way, with benefits for all.

She told him she had secured funds for five rickshaw bikes, on condition that he helped her build a programme. They spread the word through friends and flyers, and soon they had a team of volunteer cycling “pilots”.

Within a year, Copenhagen expanded the project to all 40 city nursing homes. Key to the programme’s success, say organisers, is how it builds trust without creating a sense of obligation: pilots can register online when they are able to take passengers out for a spin.

Now “Cycling Without Age” has more than 400 rickshaws in two-thirds of Denmark’s municipalities and 3,000 regular pilots.

In the four years since, the programme has spread to 150 cities in 27 countries worldwide, from America to Australia. One glaring gap on their map is Ireland. But Kassow, married to a woman from Sligo, is hopeful that the cycling renaissance will soon change that.

Because “Cycling Without Age” has grown so fast, the Copenhagen team is unable to set up projects in other countries. But it has a wealth of knowledge it is happy to share should locals – or local authorities – approach them.

“Usually all it takes is one person who says, ‘I am going to get this going’,” says Kassow.

And what about bad weather? No problem: pilots don raingear, he says, while rickshaws have hoods and insulated, rainproof covers for the passenger knees.

Kassow once made the mistake of suggesting to an older man that they skip a ride because of the rain. The man’s response: “I’m not made of sugar, I’m not going to melt. So no excuses for Ireland, I’m afraid.”

Though the “Cycling Without Age” programme is still too new for proper clinical studies, all feedback and anecdotal evidence from care professionals has been overwhelmingly positive.

Copenhagen carers report their dementia patients return from their cycle trips calmer, more relaxed, speaking more clearly, and able to reduce medication. On one 300km ride to Hamburg, Kassow remembers how many passengers forgot they had walking sticks.

Dorthe Pedersen recalls one passenger in Copenhagen who had spent 90 per cent of his time in bed for nine years before his first rickshaw ride.

“Now he gets out of bed every day, and says he can do without his tranquillisers at night because he was getting so much fresh air,” says Pedersen. “He’s a new man.”

She eventually quit her job with the city to help manage “Cycling Without Age” full-time. Long term, she hopes the programme can promote an even bigger goal: recalibrating how Danes look at public services, particularly for older citizens.

By engaging citizens on a voluntary basis as cycling pilots and passengers, she hopes to see a shift in responsibility back into the hands of the people and away from public services that have often forgotten they are there to serve the public.

“Public service structures often make it difficult for people to put themselves on the agenda; the system takes over,” says Pedersen. “But the public health system does not own old people. It has forgotten that people, even older people, have their own mandate.”

Back at the care home in Copenhagen, Birthle is back from her spin, looking serene. She was already a youthful 99 when she left; she now seems to have shed another few years.

Kassow and Birthle have been out on several trips together, he says. On one trip she told him how, as a young woman, she helped get Jews out of Nazi-occupied Denmark during the second World War.

“You think you are just looking at an old person, but you are looking at someone with so much history and you get such stories on the rides,” he said.

And how does Birthle feel now after her latest ride through the city?

“Oh, it was wonderful to get out and observe things,” she says. “When you’re out cycling, you feel normal again, you don’t feel excluded.”

So the “Cycling Without Age” rickshaw rides aren’t too fast for her, then?

“I started roller-skating when I was three and ice-skating at six,” says the 99- year-old, adding drily: “I’ve always had speed in my life.”

The Irish Times will publish a special supplement on Wednesday, April 20th, tracking the growth of cycling, as a sport, past-time and as a method of travelling to and from work.

The supplement, which is being published in association with the Road Safety Association (RSA), will also provide tips on safer cycling and outline the various benefits that cycling can bring, both health and otherwise.