My Health Experience: ‘I was drinking myself to death, and I nearly got there’

The death of a friend and my own near death, forcing me to give up alcohol, have taken away two mainstays of life 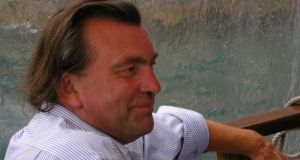 Richard Pine: ‘The two vacancies in my life are equally catastrophic. I depended on each of them to the same extent.’

Last year I lost two of the five props that sustain my life: my closest friend and alcohol. Two enormous bereavements, from which I know I can never recover. I now cling to the remaining three: my two daughters and my writing.

I was drinking myself to death and I nearly got there. Luckily, I suppose, my liver interrupted with a crude announcement: either you stop abusing me, as you have been for the past 45 years, or I stop work completely. This took the form of a massive haemorrhage 15 months ago.

I am an alcoholic. Not a “recovering alcoholic”. Not a “reformed alcoholic”. An alcoholic, full stop. Someone for whom two or three bottles of wine were a daily necessity. Because I was permanently drunk, I always appeared sober, which puzzled those who were badly hurt by my drunkenness, especially my family. And a drunk doesn’t realise how much they are hurting their nearest and dearest.

If it were not for my liver’s ultimatum, I would have continued with my usual consumption. I am not ashamed to admit this. It’s a fact of my life. It is only the fact of inevitable death as a consequence of further drinking that prevents me.

Now, not only is the wine a forbidden fruit, but so too are the olives and the cheese. Anything with salt in it is out of bounds, because salt impairs the remaining, tenuous, liver function.

So, no salted or smoked food (ham, salami, salmon), no cheese (except Emmental), no vegetables or pasta if cooked in salted water, no tinned food in brine. I even discovered recently that I can no longer have a Mars bar.

Only grilled fish or meat (no gravy or sauces), salad, fresh fruit and yogurt. It’s very limited. And boring. But the local fresh produce here is of the highest quality. The thought of high-mileage fruit and veg is a sobering thought.

It makes eating out almost impossible. It’s far easier, in fact, to abstain from alcohol than it is to avoid salt, one of the most ubiquitous minerals. If I were to chew a chair leg, like my daughter’s puppy, I’d be ingesting salt. So I’ve given up chair legs.

A year ago, despite essential diuretics, I had accumulated so much ascites – fluid on the abdomen and legs – that I had to have 12 litres extracted.

Extra-strong diuretics have so far prevented a resurgence of the fluid by flushing away the salt. If the price of freedom is eternal vigilance, the price of life is eternal urination. Once an hour, night and day. Never more than an hour’s uninterrupted sleep. This is payback time, to apologise to the liver which, by rights, should have given up the ghost long ago. And, of course, to apologise to those I have hurt.

Living alone, with little time and even less inclination for cooking, my domestic options are limited. I make a two-gallon pot of salt-free soup, which takes an hour to prepare and lasts a week, supplemented by grilled steak or chops and salad.

I have eight or nine orange trees that see me through the winter, and the same number of lemon trees for lemonade in summer. My vines are laden with grapes, which in September go off to the winery for someone else’s enjoyment. A home brew without a home.

The advantage of living in Greece is that it is a café society, not a pub culture. It’s so much harder not to drink in Dublin, because everyone, by innuendo or blatant comment, makes it clear that you are not merely a teetotaller but an alcoholic. In Greece, no one notices whether you drink a soda or a coffee or an ouzo or a wine. Why should they?

The two vacancies in my life are equally catastrophic. I depended on each of them to the same, illogical but necessary, extent. To lose them both was like my whole world falling apart. The roof starts to collapse, and the work of the three remaining pillars becomes that much more onerous.

My two daughters have been walking saints through all this and, so far, my writing interests and skills – including my regular column in this newspaper, and more books in the pipeline – are still passing their annual road test.

A doctor told me I wouldn’t be able to give up without help. AA and a social worker were threatened. I told him that I can do it through willpower. He rubbished that idea, so I said, “Have you ever met a Protestant?”

“Then you don’t understand that when we say something, we mean it.” I think that, eventually, he understood.

The other threat dangled over me was a transplant. But it’s not for me. I’d rather have a brain transplant. If I decided to drink, it would be in the full knowledge that it would kill me, probably quickly. That in itself would be fine, except that it would mean I was losing my two wonderful daughters and reneging on my writing.

While they sustain me, they are my reasons for living, my reasons for not drinking. But I crave it every day, especially on days of celebration, such as sending my new book to the publisher, or days of grief, such as the death of my friend.

On those special days, black and white, that prop is now missing, forbidden, not by any doctor’s diktat, but by my own volition, my choice, my willpower.

And it would be a squalid death. To die on the spot, having downed one’s last drink, “to cease upon the midnight with no pain”, might be a great way to go. But after the haemorrhage I woke up in intensive care with tubes in every orifice and then some. Extrusions, transfusions, and intrusions. Not a nice way to go, especially with the best children in the world sadly, pityingly at your bedside.

Richard Pine is an author and the founder-director of the Durrell School of Corfu, where he lives. He contributes a monthly Letter from Greece to The Irish Times.