My health experience: COPD takes my breath away

Michael Drohan knew nothing about COPD, but soon learned that with this disease, his lungs are irreparably damaged 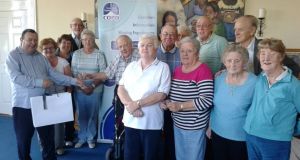 Michael Drohan and the Waterford COPD Support Group, which he helped to set up in 2011.

I was diagnosed with COPD (chronic obstructive pulmonary disorder) in 2006 after being in and out of hospital for a couple of years with pneumonia and bad chest infections. I had very bad asthma as a child and nearly died a few times.

At the age of 14, I was only four stone, eight pounds. I was mollycoddled as a child because of this and told to sit down and save my breath, which I now know is the opposite of what I should have been doing. I should have been getting up and exercising to improve my quality of life.

I was given cortisone injections which affected my growth, and I was put on inhalers for the first time in secondary school. I used to take a puff of the inhaler every time I got breathless, which is not what I should have been doing.

Instead of taking two puffs four times a day, I was taking 28-30 puffs a day. Then I heard about some poor young lad who died from overdosing on an inhaler and I cut down.

At 18, I started smoking. What a substitute for the inhaler. My asthma wasn’t too bad for a while, until I started getting bad chest infections that wouldn’t clear up. I was put on antibiotics and steroids, but ended up with a virus of my heart which left it working at only 33 per cent of its capacity.

I remember standing at the All Ireland Final 1991 when I felt this throbbing pain radiating out from my chest around my heart. I ended up in intensive care in Waterford hospital the following day and was there nearly a month.

I joined the Irish Heart Foundation’s Happy Heart programme in Waterford and was involved until it ended a few years ago. I was alright until 2004 when I ended up in and out of hospital for a few years with bad chest infections and pneumonia. I had to pack in work at that stage.

It was during one hospitalisation in 2007 that a doctor mentioned that I had been diagnosed with COPD. That was the first I had heard of it. I knew nothing about COPD, but I soon learned that with this disease, your lungs are irreparably damaged.

In 2009, I did an eight-week rehab pulmonary course at Waterford Regional Hospital. That was brilliant, I hadn’t felt as good in years and I kept improving every week.

I kept in touch with one or two people from the course and we all felt that we would lapse on the exercise when there was nobody watching over us.

A lady from Bray, who had started a COPD support group, came to tell us all about it and asked if we would be interested in starting our own one. I said I would start a group so we would not lose the benefits of the rehab course.

Since the Waterford COPD Support Group started in 2011, we have met every Tuesday and Thursday from 2-3pm for exercise. A lot of people coming to us are elderly and live alone, so they look forward to the classes. It’s a social outing for them. We exercise for 40 minutes and then have a cup of tea and a chat. We have Christmas dinner in a local hotel and go off for spins in the summer.

I have worked for Waterford United Football Club for the past 15 years in various roles and my COPD has not stopped me from travelling around the country with the club. I used to play a lot of tennis and I still love sports of all kinds. I am a member of Kilmacud Gold Society, I’m not a great golfer but I love it. I love fishing too, I just love being active and out and about.

It’s so important for people with COPD to keep active, even if it’s just getting up and going to mass or walking to the shops.

A few of us from the support group were asked if we would like to test out a new app for Novartis called Volari COPD, designed to help people live with their COPD by making small, positive changes every day. I have found it beneficial, it’s a great little aid, like a little companion on my smartphone. It asks me how I feel and how I slept, how many minutes I spent on exercise that day and at what intensity, if I have been taking my meds and how many glasses of water I had.

It’s a great way to look back over the past few days and I find it gives me an incentive to drink more water or exercise more. I can bring it to my GP so he can also monitor my progress.

On top of my COPD, I have type 1 diabetes and have to inject myself every day. I have had a total hip replacement due to osteoporosis related to my heart medication. I wear a mask at night hooked up to a CPAP (continuous positive airwave pressure) machine because tests showed that I stop breathing during the night.

I am married for 30 years to Lily and we have seven children. Three of the children are on inhalers for asthma, but they are not too bad, thank God.

I try not to let my COPD hold me back. I’ve been a bit breathless the past few days so I’m watching for an infection, but the exercise keeps me feeling good. It’s so important to get up and do a little bit each day. Don’t lie down under it at home; that’s how you get depressed.

A lot of COPD sufferers were smokers and put on weight after giving up smoking. I have a stone and a half to lose but I am giving myself a year to do it, it’s all about taking little steps.

COPD can be so stressful on the patient and their carers. Just going up stairs or doing ordinary housework can leave you in tears of frustration because you can’t breathe. It’s important to plan your day and don’t put pressure on yourself. There are some good websites such as COPD Support Ireland website, copd.ie, which gives a list of all the local branches.

Other good sources of information are copdfoundation.org and copd360social.

It can be helpful to communicate with people who are going through the same experience. Our plan is to have a COPD support group in every county eventually.

In conversation with Michelle McDonagh

COPD: What is it?

COPD or chronic obstructive pulmonary disease is a chronic disease that affects a person’s ability to breathe and perform the easiest of tasks. It affects more than 380,000 people living in Ireland.

Symptoms include heavy coughing, wheezing, shortness of breath and chest tightness. Cigarette smoking is the main cause of the disease, while long-term exposure to other lung irritants, such as air pollution, chemical fumes or dust, may also contribute to COPD.

The Volari COPD app, which has been created by Novartis and is supported by COPD Support Ireland, is available to download free from the iTunes App Store and Google Play. It helps people to track their behaviour, learn more about their condition and habits, and rewards progress.