Murder on the dancefloor with high heel horrors 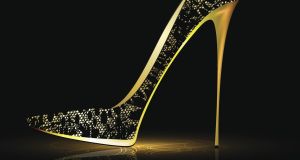 ‘Nothing is more empowering than towering over your boyfriend and your boss in shoes that double as an offensive weapon. Stilettos – not combat trousers and pierced tongues – are a real source of girl power.’ Photograph: Thinkstock

Many office Christmas parties, to the disappointment of some, are held on the premises with little space for dancing. But in the hospital lab where I worked, the risk of technicians pirouetting into freezers full of herpes demanded festive celebrations at dance-friendly venues.

And when the Nolan Sisters erupted with I’m In the Mood for Dancing (1979), the truth of Cicero’s assertion that no sober man dances unless he is mad was evident, with grim-faced consultant virologists unravelling imaginary skeins of wool and hopping from foot to foot.

And with the tones of Christmas tunes in the air, who can resist the pull of a well-sprung dance floor? But beware of one element in the heady mix of corporate high-jinks, exuberant grooving and alcohol. No, not Arthur from accounts in his sparkly waistcoat; it’s weaponised footwear in the form of stilettos.

Ever since Roger Vivier’s collaboration with Christian Dior in the 1950s, high heels have evoked both sensual allure and risk. Thus, Germaine Greer in her The Whole Woman (1999) cites Lesley Thomas: “Nothing is more empowering than towering over your boyfriend and your boss in shoes that double as an offensive weapon. Stilettos – not combat trousers and pierced tongues – are a real source of girl power.”

And in his introduction to Lovers and Other Strangers (2009), an exploration of the painter Jack Vettriano’s work, Anthony Quinn, in describing the “abrasive sexual energy” of Genevieve Solecki, one of Vettriano’s models, wrote: “she looked like a woman to whom a pledge of eternal love might provoke her to stab you with a stiletto”.

It was an inadvertent stab with a stiletto that prompted surgeons at Cork University Hospital to describe a recent case in the Journal of Plastic, Reconstructive and Aesthetic Surgery. A 22-year-old woman was socialising with friends at a bar when another customer wearing stilettos accidentally stood on her foot; specifically, her big toe.

Report co-author Cormac Joyce, specialist registrar in plastic surgery, said: “This was a particularly unusual case and one we don’t see every day. The patient was referred to us four weeks after the initial injury, by which time her toe was necrotic and malodorous. We brought her to theatre to remove the dead tissue and she received intravenous antibiotics. She ended up losing the front third of her big toe.”

Joyce also pointed out that at this time of year especially, alcohol would probably act as an anaesthetic if such an injury were to occur, possibly delaying medical treatment. He also counsels stiletto wearers to be mindful of who or what they step on. And if your toes have been trampled on? “It is best to seek medical attention if the swelling and pain have not settled within a couple of days,” he advises.

Joyce further reveals that there have been reports in the medical literature of stiletto heels puncturing the eye, the skull and even the brain.

But stilettos can affect the brain, especially the male brain, in a more subtle sense. In short, High Heels Increase Women’s Attractiveness. That’s the title of a recent report in the journal Archives of Sexual Behaviour, where Dr Nicholas Guéguen describes a series of studies, in the first of which a 19-year-old female researcher wore a black skirt and jacket, a white shirt, and shoes that were either flat, or with medium (5cm) or high (9cm) heels.

She asked 90 male pedestrians, aged between 25 and 50 years, to complete a questionnaire on gender equality. The response rate was heel-height dependent: 46.7 per cent when she wore flat shoes; 63.3 per cent for medium heels; and 83.3 per cent for high heels.

For those for whom time is of the essence, another of Guéguen’s findings was that the average time for a man to say hello to a woman in a bar was 13.5 minutes, 11.5 minutes and 7.5 minutes according to increasing heel height.

Stilettos may signify erotically charged entanglements, but they could also make you fall flat on your face. For example, when UK shoe company MBT surveyed 1,000 women, 42 per cent reported that they had either fallen over or twisted their ankles while wearing heels and high heel-related injuries cost the UK £29 million a year.

Bunion removal, for instance, can cost about £4,000 a time, this procedure alone accounting for £10.5 million. The results of a recent Californian study published in the Journal of Orthopaedic Research (2015, 33: 405-411) showed the outcome of gait analyses carried out on 14 healthy women who wore different types of shoe and weighted vests.

Researchers found that gait changes associated with increasing heel height were similar to those seen with ageing and osteoarthritis (OA) progression, suggesting “that high heel use, especially in combination with additional weight, may contribute to increased OA risk in women”.

Wearing stilettos may also contribute to back pain, according to the results of a recent Chinese study. Lumbar lordosis (LL) occurs when the natural arch of the lower back becomes excessively curved, exerting painful spinal pressure. Chinese researchers investigated the pelvic-spinal structures of 21 females aged 14 to 20 years when they were both barefoot and wearing high heels. They found that wearing high heels can increase LL and result in “an uneconomic body position”, and they suggest that this may help explain “why some women complain that wearing high-heeled shoes causes them to experience low back pain” in the European Spine Journal (2015, 24: 1274-1281).

So, is it time to ditch the stiletto? Following the stushie at the 2015 Cannes Film Festival, when it was alleged that women not wearing high heels were turned away from a viewing of the movie Carol, actress Emily Blunt reportedly told the BBC: “We shouldn’t be wearing high heels anyway.”

She’s talking sense of course, but as the owner of a male brain seldom colonised by sense and sensibility, I’m unable to give Emily’s comment my hearty endorsement. Although I don’t wear stilettos – well, never outside the house – I defer to Mr Joyce and his co-author: “While (we) recommend exercising caution with high heels, we don’t advocate abandoning them. After all, there is a point in wearing stilettos!”

‘The problem is households’ - Restaurants shocked at hospitality ‘lockdown’