Two creches, in Dublin and Cork, prove you don’t have to be in the countryside to get the children out and about 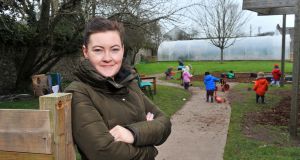 The community creche in the Bessborough Centre is only 10 minutes from Cork city centre, but the 120 children who attend this full-day service are lucky enough to spend about half their time outdoors.

“Our belief here is that under-sixes need to be under-sixes and they need to be nothing more than that,” says manager Tríona O’Connor. The children, who range in age from four months to 11 years, are given every opportunity to enjoy free play in a natural environment, while ensuring they are cared for and supported in their learning.

On a typical day, they will go outdoors at 10am and come back in for dinner at 12.30pm. After a nap, they’re back out at 2.30pm or 3pm and will usually be collected by their parents from the outdoors. The infants go out less frequently in the winter but there are buggies in which six of them can be taken out at any one time, she explains.

In the three years she has worked there, O’Connor can remember only one child being withdrawn due to the amount of time being spent outdoors. Most parents see it as a big attraction and the service has, since she started there, created an extra 40 spaces to meet growing demand.

The children have about seven acres at their disposal, which includes a mud kitchen area that is extremely popular with the two- to four-year-olds; a large grass area with three large oak trees; a willow archway where they can create a den in the summer and, beyond all that, three acres of parkland with trees, in the centre of which is a cabin for shelter. It’s an idyllic setting for the creche, which is just one of the family services offered in what, ironically, was once a notorious mother and baby home.

The 30 staff members are the biggest advocates of outdoor play, says O’Connor. They have to be aware of the risks, but that becomes second nature. When you understand the importance of what’s going on, it is much easier to trust your own abilities – and the children’s competence.

“I grew in confidence and felt more energetic to continue what we are doing. They are way ahead of us – there is no point in us striving to be like them, when outdoors has only become a topic in early years in Ireland in the last four or five years . . . if we keep going as we are, I am sure we will have that fire pit in another two years!”

Beverton Preschool in Donabate, Co Dublin, puts equal emphasis on indoor and outdoor learning for its 45 children but, unlike the Bessborough, it doesn’t have its own parkland.

“We are limited as we are in a housing estate – as are the vast majority of early year services,” points out owner and manager Nickola Cullen. The answer to that, she decided, was to go out into their community several times a week during the children’s daily three hours at the preschool.

It may be half an hour on a nearby green, a trip into the village or a two-hour excursion to Newbridge Demesne, which is about 25 minutes away for little legs.

“Getting there isn’t usually an issue, getting home can be a bit of a drag,” says Cullen. “What we have learned to do is to slow down and enjoy it. If we go at the children’s pace, they are happy to walk.”

It’s a key difference to the experience of many time-pressed parents rushing around doing various errands with small children in tow. The preschool staff stop frequently to look at things, asking children questions and analysing what they’re looking at.

Occasionally the whole group goes out together; for shorter outings it is usually in groups of eight or nine. As a placement service for DCU and DIT services, it has extra hands to call on for the three-to-one ratio required for outings and parents help out too.

There is the added bonus of promoting active citizenship, which the children demonstrated when they encountered flooding under the railway bridge where they walk to get into the village.

“It was over welly height and we couldn’t get through and they were disgusted,” says Cullen. So the staff asked the four-year-olds how they were going to solve the problem.

“Their answer was to ‘get the man with the digger’.” Back at base, the children did drawings of the problem and sent them to the council.

“We also sent them to local councillors, one of whom visited the children, listened to their concerns and wrote a big letter on their behalf,” she continues. “Lo and behold the council came out.”

A crew did a whole week of surveying; the children went down and met the people doing it and gave their point of view.

Within three months of the children’s aborted trip, the council had fixed the bridge and it doesn’t flood any more. Since then, the preschool has planted and tends flowers around an old pump down there and its green schools committee does litter patrols.

“We have had letters from our neighbours in the community thanking us,” adds Cullen. “It was lovely for the children to see, from start to finish, how their say could make a difference.”

Yotam Ottolenghi: how to turn yesterday’s bread into a feast
6

Recycling, reusing and reimagining rubbish into clothing and accessories
7

I’m Irish and I live abroad. Why have we been forgotten in Election 2020?
8

How do you get bereaved fathers to talk? Bring a football
Real news has value SUBSCRIBE