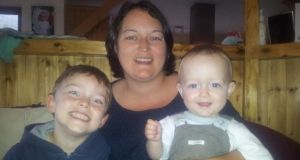 Gemma O’Connor with her children Dara (left) and Finnán: ‘I am definitely one of the lucky ones.’

The weather hasn’t been too bad lately but winter is not far away and with it come the usual coughs and sneezes. However, while mild doses of this kind are easy to manage, more serious conditions such as meningitis are also rife during the colder months and can be fatal.

Normally associated with babies and young children, this serious infection can affect people of any age and Meningitis Ireland is urging everyone to be aware of the symptoms as they may initially be dismissed as signs of influenza.

Diane McConnell, manager of the Meningitis Research Foundation in Ireland, says: “Meningitis and septicaemia are easily mistaken for milder illnesses but, unlike a dose of flu, it can kill within hours and may cause serious, lifelong disabilities. As many as one in 10 of those affected will die and a quarter of survivors will be left with after effects, some as serious as brain damage, amputations, blindness and hearing loss.”

However, sufferers can make a full recovery if the condition is caught early.

When 35-year-old Gemma O’Connor was a teenager, a case of suspected food poisoning turned out to be meningitis and quick-thinking medics saved her life.

“One Sunday when I was 16 I ate a chicken burger which didn’t taste right to me so I threw it away,” she says. “That night I started vomiting and was very ill, which we put down to food poisoning. I was sick all night and the following morning I still felt very unwell so my mother told me to stay off school.

“She went to work and rang me later to see how I was. I could barely walk and had diarrhoea, as well as aches and pains. She told my sister to take me to the GP and as we were in the waiting room, Mom arrived and both she and the doctor noticed that I was beginning to develop a rash on my arms.”

The GP recognised the symptoms of meningitis and, after administering a shot of penicillin, transferred her to hospital immediately.

“When I got to hospital, I was actually feeling much better due to the injection my GP gave me – so my parents went home,” says O’Connor. “But at 1am my parents got a call to come back because a nurse spotted that I had virtually no blood pressure. I was rushed to intensive care where they discovered that I had meningococcal septicaemia [a form of meningitis B].

“When my parents arrived they were told I was very ill and could have between 10 minutes and an hour to live. I was in and out of consciousness and even woke up at one stage to see a priest anointing me. It was very scary.

“My organs started to fail and it was a horrific time for our family. Doctors pumped antibiotics into me and I had several blood transfusions.

“I spent more than a week in intensive care as they had to grow bacteria in a lab before they knew exactly how to fight it and which antibiotics would help.”

A week after she had been admitted, O’Connor was on the mend but doctors did not know how the disease would affect her future health.

“I pulled through and although I had to go back into the hospital a week after I was discharged, I survived and have had no other bad side effects,” she says.

“I really believe my GP and the consultant at Kerry General Hospital saved my life. The consultant called me his miracle case – he believed that I was able to fight the disease because I had been fit and healthy to start with.

“I went back to school two months after my diagnosis and completed my Leaving Cert as planned. I then went on to college and have been working in a bank since I was 20.

“It was only when I had my children – four-year-old Dara and two-year-old Finnán – that I realised what my parents must have gone through and how strong and supportive they were,” she says.

“I am definitely one of the lucky ones. So I would advise anyone who has any concerns to get it checked out immediately.”

Thinking of take-out tonight? Here's the pick of Dublin's restaurant meals to go
2