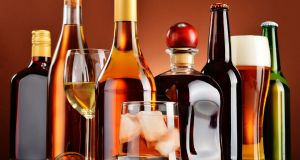 The more we drink, the greater the risk of alcohol-related cancer. However, cancers caused by alcohol can take many years to develop. Photograph: Thinkstock

According to Dame Sally Davies, the chief medical officer(CMO) for England, “drinking any level of alcohol regularly carries a health risk for anyone, but if men and women limit their intake to no more than 14 units a week it keeps the risk of illness like cancer and liver disease low”.

She was speaking after introducing new draconian drinking guidelines which essentially advise that there is no safe level of drinking for either sex.

Her scientifically correct yet somewhat startling advice to legislators and the public is that any amount of alcohol consumption increases the risk of a range of different cancers.

The 14-unit figure is apparently the level expected to cause an overall lifetime risk of death due to alcohol of about 1 per cent, according to the expert committee which advised the CMO.

And yet a member of that committee has confirmed there is little evidence regarding the impact of any guidelines in changing health behaviours. Which makes it difficult to see the change in guidance as anything other than an unwelcome interference by the “nanny state”.

In fact, it could be seen as an especially bad example of official health scaremongering.

In response I was pleased to see Prof Sir David Spiegelhalter, Winton Professor of the Public Understanding of Risk, University of Cambridge, ask: “So should we feel okay about risks of this [1 per cent] level?

“An hour of TV watching a day, or a bacon sandwich a couple of times a week, is more dangerous to your long-term health. In contrast, an average driver faces much less than this lifetime risk from a car accident.” And in what seems to me to be a crucial point, he added: “It all seems to come down to what pleasure you get from moderate drinking.”

Profs James McCormick and Petr Skrabanek of Trinity College Dublin taught us to be suspicious of medical dogma, especially that of the killjoy variety. They were advocates for hedonism, arguing that individual patients had a right to harm themselves in the pursuit of happiness, provided they did not harm others in the process.

In their book Follies and Fallacies in Medicine, and on the back of growing evidence for the protective effect of a moderate alcohol intake in the prevention of coronary heart disease, they wrote: “What is perhaps surprising is that those who are enthusiasts for prevention and health promotion have never encouraged people to drink, presumably because of the danger that we would all become drunks.”

It is unlikely the Republic’s CMO will fall into his UK counterparts’ trap.

“There is a very long lag time between exposure to alcohol and the development of cancer [10-20 years]. This is an especially important message for young women in relation to breast cancer risk,” she said.

And in a lesson in balanced public health advice that could be learned from across the Irish Sea, the NCCP stressed that most alcohol-related cancers can be prevented by adhering to Department of Health low-risk drinking guidelines (up to 11 standard alcoholic drinks per week for women and up to 17 for men).

The appropriate tone was captured by Dr Laffoy’s comment that in relation to alcohol and cancer risk: “Less is good and none is best of all.”

Face masks: All you need to know about where, when and why you need one

Cocktails at home: the best mixes and kits to buy
7

Aberdeen to Athens by bike: Homesick student cycles from Scotland to Greece during pandemic
9