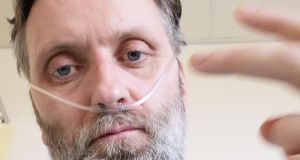 Coronavirus, says Barra Fitzgibbon, was the worst thing that has ever happened to him. As a result of contracting the virus, the father of two was put into a medically-induced coma last March – but first he had to make a traumatic call to his wife and children warning them of the possibility he might die.

“Even now, almost six months later I still feel the effects. I still get moments where I’m grateful just to be alive,” says Barra, a Dubliner who has lived in London for the past 20 years.

“I’m more anxious about Covid than people who haven’t had it. I have fatigue. I have blood in my semen,” says the Killiney native, who, up to recently worked as a voiceover artist in the TV industry in the UK.

Barra, who was told he was the first survivor of 60 people being treated for the virus in the ICU unit of Lewisham hospital in London over 12 days last March, is immensely grateful not to have suffered the after-effects experienced by some other patients – depression, hallucinations, post-traumatic stress disorder and “massive anxiety”.

“I was almost like a poster boy for survival during that period,” recalls the 49-year-old, who prior to his ordeal had been studying the impact of good conversations on mental and physical health. He was fascinated by the effect that conversations with hospital staff seemed to have on his recovery: “The consultants made a fuss of me. They called me a soldier; told me I was the only one who made it.”

He realised that the type of conversations he had with health personnel “went to the core” of both some setbacks that he experienced and his subsequent recovery. “The positive effect of these good conversations had a great effect. The consultants made me feel like a team player; they made me feel like I was part of their team. This made me want to get better both for me and for them,” he recalls.

Following his release from hospital, Barra founded a personal development firm which specialises in teaching the skills to engage in better conversation. He has since been invited to address 1,000 staff at the NHS annual conference on how good conversations with staff can affect a patient’s recovery.

March 9th
The UK is partying! The build-up to Cheltenham and Paddy’s Day in full swing, and the pubs are rocking. It’s been a heavy week.

Out in different venues, about three times this week, for work and socially. Venues packed and there’s not much awareness of Covid, apart from the fact that you should wash your hands.

The feeling is that this is very much a normal flu affecting old people and those with medical conditions. Just crack on, thinking, “Oh, if I get this, I’ll beat it like a normal ‘flu’”.

March 11th
Notice I’ve picked up a cough. The GP advised to drink fluids, take paracetamol. I was aware that Ireland was going into lockdown. I thought the Irish were over-reacting.

March 13th
Breathlessness, fever, hacking cough. Taken to Lewisham hospital emergency department where I’ve been diagnosed with chest infection and double pneumonia. My lungs are full of Covid. Every member of the health staff I meet is dressed head to toe in PPE.

What he didn’t know, he commented afterwards, “was that I wasn’t going to see another human face for 12 days”.

March 14th
“Couldn’t maintain oxygen, picked up sepsis. My family in Ireland are very worried. They worry that I have no chance because of the sepsis. Doctors promise they’ll do everything to save me. Have spent three days on a Covid ward, but by day three the oxygen levels in my blood are crashing.

March 15th
The ICU consultant visited, dressed head to toe in PPE. He says I’m going into a coma, that I will be intubated and ventilated. He couldn’t say for how long I’d be in the coma. He explained that machines would do my breathing.

He has advised me to contact my family, in case I didn’t wake up. His words were clinical, but his eyes were worried and full of sympathy.

It was a tough conversation followed by a tougher one – a FaceTime call to my wife and kids.

Talked to the kids and to my wife Jenny. Tried to say goodbye gently and give the kids some words of wisdom. Explained it was nobody’s fault.

March 22th
Came out of coma with liver and heart badly compromised, but told I’m starting to recover. The sepsis and the Covid on the lungs are steadily clearing. The treatment’s working but I also believe something else also had an impact. I’ve realised how good, well-handled conversations with consultants and nurses helped my recovery and how bad ones didn’t.

Once off the machines I had an oxygen mask. I had to clear my lungs, and the gunk that was coming up had to be cleaned off the inside of the mask which first had to be unclipped and washed before being replaced.

A really unpleasant nurse told me: “If you think I’m cleaning out that mask, you can forget it. You need to swallow what you cough up. Started to swallow and began to vomit into the mask. Rough night.

Am slow to criticise the NHS however – there are a lot of good people there and they saved my life. Heard about a male nurse called Andrew who updated the family on my condition, gently and informatively. He was extraordinary. He’d call my family after his shift finished. He was amazing.

March 23rd
I’ve seen people flood into ICU and die. There were even young men in their forties who were dying. The reporting was all about older people and people with underlying medical conditions but that’s not what I was seeing.

What I was seeing was a lot of men in their forties and fifties coming in and not making it. It was like a war zone.

Over the 12 days that I was in ICU the numbers went from 20 to 60 all being looked after by the same number of staff.

Good conversations with a minority of consultants and nurses were a powerful motivator in recovery. These conversations that treated me as an equal partner, congratulated me as much as the treatment on my recovery, made me feel part of a team and made me want to get better for them as well as me.

March 25th
Definitely recovering. Returned to a Covid ward. Everyone around me has it; I know from their coughs. Have to get discharged as am really worried about the possibility of re-infection.

March 26th
Discharged. Doctors said it was too early but they didn’t know what to do with me. Getting me home seemed as sensible an option as any.

March 27th
Home but recovery is a long process. Decided to make real the idea I had in my hospital bed and in recovery. Realised that extolling the benefits of better conversations has to become my career.

Have launched a new venture to help others, including the NHS, understand the power of good conversation. I set up blogbarra.com offering personal development programme with better conversations at their core.

June 4th
Enjoyed a reunion with the staff of Lewisham ICU. When I arrived, the whole team came out. It was really emotional. I arrived with bottles of Roe & Co Irish Whiskey.

July 23rd
NHS has got in touch to request me to address 1,000 delegates at its annual conference in September on how conversations between consultants/nurses/patients are important to recovery and wellbeing.

To be able to give something back to the people that saved me was an opportunity I couldn’t refuse.