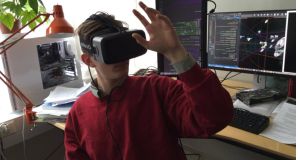 It’s a spider: virtual reality tackles a fear of spiders. 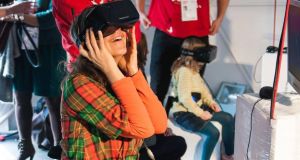 Irish game developer and DIT lecturer Owen Harris developed Deep, a meditative VR game which promotes deep breathing to treat his symptoms of anxiety at a time when he couldn’t afford therapy.

Imagine learning to overcome your greatest fears and anxieties in a virtual world before facing them in real life. Virtual reality (VR) can help diagnose and treat people with mental health disorders and phobias by providing a realistic experience without the risks or costs associated with exposure therapy, says Irish cyber psychologist Dr Gráinne Kirwan.

“I’m afraid of heights. If I was going to go and seek treatment for it and the therapist had to rely on real-life exposure therapies, that would mean taking me to a bridge or making me stand at a height.

“Part of the problem with real-life exposure therapy is the lack of privacy once you step outside the therapist’s office. With VR, all treatment can be conducted in office,” Kirwan says.

“Someone may not be willing to go near a live spider, for example, at that moment but will handle going near a virtual one and be more open to that, so it’s a gradual exposure therapy in itself.

“I think virtual reality is something every therapist will have to consider,” says Kirwan.

While VR has been used by therapists for decades, it is still available only in a number of specialised clinics; with cost, lack of training, and lack of clinical research among the main barriers for expanding treatment.

However, the release of affordable mobile VR headsets could improve access for the public, making VR therapy more accessible to new patients. As use increases, we could also see a rise in the development of self-guided therapies.

Irish game developer and DIT lecturer Owen Harris developed Deep, a meditative VR game which promotes deep breathing to treat his symptoms of anxiety at a time when he couldn’t afford therapy.

“I don’t think it’s enough to turn up to therapy once a week. I think you need to be involved with the process on a daily basis. VR is special because of its property, anyone can go anywhere,” says Harris.

The game, which requires players to breathe deeply in order to float in an underwater environment, requires a headset, headphones and a belt to track breathing patterns.

While still in beta mode, Harris has tested the game on attendees of VR conferences which led to some users being moved to tears by the experience.

“Here in Ireland we do have massive problems with mental health that people are only beginning to speak about right now.

“With VR, anything you’re nervous about you can try out yourself in a way that’s safe, and then acquire the skills to do it in the real world. If you’re with a therapist they’ll ask you to sit there and imagine you’re saying these things whereas with VR you can actually experience it as if it’s real,” Harris says.

In February this year, a study in the British Journal of Psychiatry Open found patients suffering from depression could benefit from a virtual reality therapy in which they give advice to a crying child.

Researchers say the trial was too small to offer any conclusive proof but the study will pave the way for more research on the impact of VR on depression.

“Depression has been something no one’s been really able to treat with VR,” says Dr Brenda Wiederhold, a licensed clinical psychologist in the US and Europe, and president of the Virtual Reality Medical Institute.

“I think we’re going to see that treated in the near future with VR very successfully,” Wiederhold says.

“It’s educating the general public and getting them to try it. It’s never been easier to create virtual worlds and I think we’ll see more and more disorders being treated with VR,” says Wiederhold.

Walk in the shoes of someone with Alzheimer’s Have you ever wondered what it is like to have dementia? Alzheimer’s Research UK has launched a virtual reality app called A Walk Through Dementia, which talks users through three first-person scenarios depicting life with Alzheimer’s.

Most people associate memory loss with dementia. However, other symptoms include disorientation, light sensitivity, hallucinations and sudden changes in food preferences.

“[The app] allows you to put the user in the middle of a situation [and] demonstrate the other complex symptoms around dementia that people might not realise,” says Tim Parry, head of communications at the charity.

In one scenario, you wander away from your son as he’s helping you home with the groceries, quickly becoming lost in a warren of similar looking alleys. You scream when you see your son about to step into a giant chasm in the sidewalk. The chasm is, in fact, a puddle but, to you, black spaces on the floor such as shadows and dark rugs, look like holes. Watch the video online: irishtimes.com/ health

Off the charts: why this paint colour is Instagram's favourite
8