Is this generation of women redefining middle age? 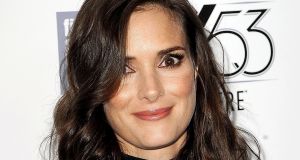 Winona Ryder: Marc Jacobs chose her as the face of his new beauty range at the age of 44, in an era when advertisers realise that using young girls does not appeal to every market. Photograph: Chance Yeh/Getty Images

Imagine if you could be handed your life over again, but this time with the wisdom you have gained from experience. Well if you are a woman and 40, you just have.

One hundred and fifty years ago, women’s life expectancy was 40. Once children were reared, they retreated into the background to knit away their remaining days. Now our life expectancy is 83. Women today find themselves with an entire extra lifespan to enjoy and we are beginning to shed the image of grey-haired, elasticated-waist-wearing has-beens. Middle age is being redefined by a new generation of women not ready to hang up their high heels.

I woke up on my 46th birthday and everything had changed. Not only was I squinting to read the vitamin pills bottle and having to pluck rogue white hairs from my eyebrow and black hairs from my chin, but I also faced a future I hadn’t expected.

My marriage is over, my parent-care years have eased and, after 10 years of babies and toddlers, I have three school children. I have reached the statistical mid-point of my life, but when I look in the mirror, I don’t see “middle aged”. I see a woman with a whole life still ahead of her.

My mid-life crisis is a mid-life opportunity. And I’m not alone. All around, I see my generation of women refusing to disappear into the mists of middle-age as silver hair becomes the new golden age.

A generation ago, middle-aged women became invisible, resigned to the “big pants” years with few role models, little representation and no voice. But as feminism has delivered unprecedented opportunities for women, middle age is no longer being seen as the beginning of the end. For many, myself included, middle age has become the end of the beginning.

Claire* is 48, recently divorced, with three sons leaving or who have just left home. Instead of suffering from empty nest syndrome, she is revelling in her new freedom. “I feel I am reversing back and having my youth now.” This summer she is going travelling with her 18-year-old son to South America. “I could have spent another 10 years just existing. But now I feel I’m living.”

Certainly better opportunities. Housework and child-rearing were almost exclusively the mandate of women. Roles are changing with shared parenting, and with women pursuing careers, our options to play a vital, vocal and positive role in society have changed too. We can be mummies, but we can also be people too.

Amanda Keough had two children and a high powered career. She “had it all” and gave it all, but it seems it gave her nothing back. “I had lost myself. When I turned 40 I realised my life was whizzing past and I was spending most of it frazzled on the M50. So I made a very conscious decision to move forward and actually engage with the second half of my life.” She left her job as a marketing director, and retrained as a pilates instructor. “I’m 47 now and have never been fitter in my life. I’ve also never felt so confident in my own skin.”

It wasn’t just her career she changed. “I had always just followed the path I thought I was supposed to take. But I wasn’t actually expressing who I really was. I got a funky haircut, I wear fun clothes and I care so much less now about what other people think.”

Which leads us to society’s attitude to ageing. I grew up watching my mum and her friends resign themselves to a societal image of how they should be.The worst social faux pax was to turn up as “mutton dressed as lamb”.

She would say things like “is this too young for me?” as if it was a crime. My generation of mid-aged peers are more likely to say “does this make me look too old?” The difference between me and my mum was that she wanted to look her age, and I don’t.

Smart, confident, sexy mid-aged women are now on our TV screens from RTÉ’s Miriam O’Callaghan to cinema’s Helen Mirren. Advertisers are (finally) seeing that using young girls doesn’t appeal to every market. Dolce & Gabbana has included Sophia Loren in its latest fragrance launch and Marc Jacobs has named Winona Ryder (aged 44) as the face of his new beauty range.

L’Oreal has recruited Susan Sarandon (69) to join its stable of mature thoroughbreds – Helen Mirren, Diane Keaton and Jane Fonda – representing women who have been ignored for far too long.

Of course, growing older does have its downside: losing our elastic skin, our eyesight and our mammary gravity. But today there are numerous ways to counter these. We are more likely to buy purple mascara than get a purple rinse.

Many of us are emerging out of the baby-making, toddler rearing years, and although live hectic lives, are re-engaging into an era of life when we might just be able to focus on our own well-being and have learned through life experience that we are strong and can actually do important things and recover from awful things.

Keough is adamant that she does not fit into the traditional template. “I categorically do not think of myself as middle aged. Logically I am in that age bracket, but mentally, physically and fun-wise I think of myself as everything I always was but I’m a lot more confident.” Mid age – it’s a new age and it’s time to celebrate.

Alana Kirk is author of Daughter, Mother, Me

* Name has been changed