My one-year-old granddaughter’s footsteps are faltering, just like Daddy’s were in his last years 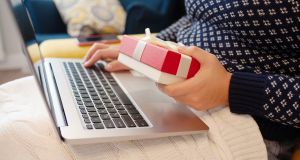 I’ve been singing Rudolph the Red-Nosed Reindeer during our daily conversations on our WhatsApp video calls. Photograph: iStock

The fact that I’ve called my coronavirus confinement journal my Alcatraz Diary makes it easy for me to confess I’ll do time if if don’t get to spend Christmas with my princesses.

Solitary confinement would be a walk in the park for this battle-hardened mammy and, indeed, first-time granny waiting here in anticipation in my baubled and tinselled grotto in the snowcapped suburbs of Westport.

You see, the eldest princess, Aisling, has a mini-madam called Ada. Even though she is only 14 months old and dribbles for Ireland, she rules the roost from her high chair in a village in west Cork.

She couldn’t crawl when I last saw her in the summer, and now these days she appears on my mobile phone screen walking in dainty red shoes, a little elf that could cause chaos in Santa’s workshop. In fact, I can already imagine her in the years to come mobilising Alabaster Snowball, Bushy Evergreen, Shinny Upatree and Sugarplum Mary to industrial action if Santa every had the audacity to put her on the naughty list.

Sometimes her little feet trip over each other and she lands on her backside and laughs, just like he did towards the end

Naturally, I’ve been singing Rudolph the Red-Nosed Reindeer during our daily conversations on our WhatsApp video calls. That’s when she has time to listen. Ada is a very busy tiny toddler these days, moving her toys around in circles in front of the new but most inconvenient fireguard which has obstructed her fascination with the mesmeric magic of flames as they dance up the chimney.

Her footsteps are faltering, just like Daddy’s were during his last years. Sometimes her little feet trip over each other and she lands on her backside and laughs, just like he did towards the end.

George slipped away in his nursing home bed here in the wild west way back in April, at the beginning of the pandemic. He lies in state now in a floral garden with monuments and seats and the most amazing views of Clew Bay and Croagh Patrick – a perfect vantage point to see Santa coming in over the horizon on his sleigh.

I imagine him holding court at night with all the other residents of this otherworld oasis. Taking his packet of Major out of his pocket, lighting up, and regaling them with yarns. Tales about his escapades over the years as The Irish Times bridge correspondent or in earlier days as a young renegade on the byways of Co Louth, mitching from school and sneaking off to his Aunt Bridget’s thatched cottage for griddle bread sprinkled with sugar.

Daddy was born on December 31st, 1930 in a coastguard house at Soldier’s Point on the edge of the estuary of Dundalk Bay. This was the decade when our nascent State was in the middle of a protectionist economic war with Great Britain – plus ça change, you might say. The world was on the cusp of the Great Depression and the rise of Nazism was about to propel Hitler’s army across Europe, leading to the devastating second World War.

It was a time when a little boy was very lucky to get toy soldiers or a train set from Santa, and if there was a bar of chocolate in his stocking as well he would skip over the moon and back.

This year, the majority of children in our relatively rich country will be dizzy from all the pressies that Santa Claus has shimmied down their chimneys as they sleep in excited anticipation on Christmas Eve. Our munchkins definitely deserve it.

After the last nine months of our pandemic pilgrimage, we adults must embrace that childlike innocence ourselves, whilst adhering to all the health experts’ advice, of course. So, for this silver-haired child, it’s time to iron my Mrs Claus outfit and make those mince pies and mulled wine.

We have every reason to be filled with hope.