Appeal aimed at groups at risk of complications from the flu amid fears 1,000 could die if season is severe 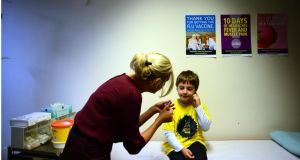 The Health Service Executive has launched a major campaign urging people in at-risk groups to get vaccinated against influenza. Research released as part of the “Get the vaccine not the flu” campaign suggests that up to 1,000 people in Ireland could die of influenza-related illness if the country experiences a particularly severe flu season. So who should get the vaccination, how does it work and will it give you the flu?

Who should get the flu vaccine?
According to the HSE, the vaccine is recommended for those more at risk of complications of flu – including people aged 65 and over, people with long-term medical condition such as diabetes, heart or lung disease, people whose immune system is impaired due to disease or treatment, residents of nursing homes and other long-stay institutions, people with a body mass index over 40 and pregnant women. “Flu vaccine is also recommended for healthcare workers and carers as the elderly and at risk patients who they care for may not get sufficient protection from the vaccine themselves,” they add.

“Influenza viruses are constantly evolving, and small changes [in surface structures on the virus] can occur that result in individuals becoming at increased of infection from these viruses,” explains Dr Jeff Connell, assistant director of the National Virus Reference Laboratory based at University College Dublin. “Therefore the influenza vaccine needs to be updated each year to account for these changes, to ensure the vaccine is effective against the currently circulating strains.”

How do we know in advance how to design the seasonal flu vaccine?
That involves gathering data on the nature of the flu viruses that are circulating. “The World Health Organisation has a global network of 140 National Influenza Centres, and the UCD National Virus Reference Laboratory is the NIC for Ireland. In addition the WHO has 22 reference laboratories which collate the data from the NICs,” explains Dr Connell from the NVRL. “Throughout the year influenza viruses which are circulating are characterised by this laboratory network to identify any significant changes, so that a representative of these viruses can be included in the vaccine for the next season.”

What is different about a flu pandemic?
It’s down to a significant change in the flu virus, as Dr Connell from the NVRL explains. “Influenza A in particular evolves constantly, with small changes [in the surface structures] – this is called antigenic drift. However, vary rarely a significant change occurs in the virus – this is called antigenic shift – and a novel virus emerges which has not previously infected humans,” he says. “If widespread human infection occurs, this would be classified as a pandemic. In this event, as occurred in 2009, there would be a major global initiative to develop a vaccine specific for the new virus.”

Where does the seasonal flu vaccine used in Ireland come from, and how can we anticipate how much will be needed in a given season?
The seasonal flu vaccine used by the HSE is inactivated influenza vaccine, manufactured by Sanofi Pasteur. “The vaccine is procured annually through a mini competition from vaccine companies short listed on the framework agreement,” according to the HSE. “The number of doses ordered is based on usage in previous years – and included in the contract is the facility to purchase additional vaccine as part of the contingency supply.

And what happens if there’s any vaccine left over? Again from the HSE: “Unused vaccines are collected from the general practitioner or pharmacy by the National Cold Chain Service at the end of the flu season and, together with any vaccine that has not been distributed, are returned to the vaccine manufacturer for destruction. This is at no additional cost to the HSE and is part of the contract.”
If the vaccine does not contain a live flu virus, why do some people feel ‘fluey’ after the flu jab?
“The ‘fluey’ feeling that that occurs in some individuals is due to the immune response being generated to the vaccine and not the vaccine itself,” says Dr Connell.

How can we prevent the spread of the virus and how should you treat the flu?
“Flu is spread by coughing and sneezing, so people should cover their nose and mouth with a tissue, disposing of the tissue as soon as possible and washing their hands with soap and water as soon as possible to help prevent the spread of flu,” said Dr Brenda Corcoran, head of the HSE’s National Immunisation Office, “Anyone who gets flu should stay at home, rest, drink plenty of fluids and use over-the-counter flu remedies to ease symptoms. People in high-risk categories should contact their GP if they develop flu symptoms.”

Will we ever avoid ‘the jab’ to get the flu vaccine?
Those of us who aren’t so fond of needles might welcome other routes of vaccine administration, and one future option could be “microneedles” – patches with arrays of tiny, raised needles that can be loaded with vaccine and pressed against the skin, where they deliver the cargo and then dissolve.

Dr Anne Moore, a lecturer in pharmacology in the School of Pharmacy, University College Cork, has been working on developing microneedles.

They could make shipping, storing and administering vaccines easier because they mean the vaccine doesn’t have to be kept cold, she explains.

“Using dissolvable microneedles, we can stabilise the vaccine out of the fridge or freezer,” says Dr Moore of the technology, which is called ImmuPatch. “This would reduce the costs of immunisation and eliminate some of the logistic hurdles of vaccination programmes,.

Another route to deliver the vaccine is up the nose, which is also a path of entry for the flu virus. A live attenuated influenza nasal spray vaccine has been introduced in the UK, according to Dr Jeff Connell from the NVRL.

For more on the flu vaccine in Ireland, see immunisation.ie