The Danes have created a cycling mecca, and the car lobby has conceded defeat. Can Dublin do the same? 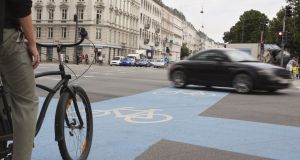 Copenhagen built proper, one-way cycle lanes with kerbs separating them from pedestrians and motorists. Anything else, the Danes say, is a waste of time, money and effort. Photograph: Thinkstock

Kamilla stands on the Knippel Bridge spanning Copenhagen’s inner harbour, drinking coffee as the spring sun plays on the water below. At her side, the trusted bike that will soon carry her into the city centre past the Christiansborg Palace – familiar to fans of television’s Borgen.

Now 26, Kamilla has been cycling since she was a child in her native Copenhagen, which ranks alongside Amsterdam as a European cycling utopia. Ask people in this city why cycling works here and you hear different theories. But all are part of a wider effort: to boost cycling through a virtuous circle of good infrastructure and positive perception.

“As a cyclist I feel that this is my city, so I cycle,” says Kamilla. “Car drivers have to look out for us rather than the other way around.”

Before I go on, this is not another eye-rolling article about Nordic perfection so complete it is not worth even attempting to emulate.

The car has not been banished from Copenhagen. Behind Kamilla’s back, so many cars roar past across the Knippel Bridge that the structure tremors beneath our feet. But twice a day, when motorists sit in traffic jams, huge clusters of cyclists glide past. Why Copenhagen and not Dublin?

Both are of similar scale and both were cycling cities until the car – and the car lobby – arrived in the post-war years. But Danes never fully lost their cycling DNA. It remained a great social leveller, beloved of students, politicians and royalty. That was a handy hook for the cycling revival, but it wasn’t enough.

It required a decision by the city to prioritise cycling as a political goal, setting ambitious goals that required joined-up thinking, forward planning and consequential investment.

Copenhagen city officials are aware of their city’s reputation as a cycling mecca and are wary of giving the impression they have found a fail-safe blueprint for success. But they say each city’s journey to bringing back bikes must begin in the same place: find out who your cyclists are and what they want.

Copenhagen’s road back to cycling got serious 20 years ago with the basics: the city counted cyclists and began to include cycling-related statistics in their traffic numbers. Then they asked cyclists to rate the existing cycling infrastructure and gained valuable insights into people’s motiv ations for cycling. More than half of Copenhageners say they cycle simply because it is the quickest way to get from A to B, and more than a third value its convenience. The environmental benefit is a bonus, but only a motivation for 5 per cent of cyclists.

Only after the Danish capital knew its cyclists, their wishes and their motivations did Copenhagen earmark around 900 million krone (€120 million) in the past 15 years for a full overhaul of the cycling network. For each project a simple litmus test was applied: would you be happy letting your child cycle there? If not, a site was earmarked for upgrade, or an upgrade sent back for an overhaul.

The city now issues regular, multiyear bike strategies with defined goals, timelines and financing. Not everything has worked. For instance when the city put cycle lanes on quieter, indirect routes, cyclists refused to use them.

Eventually the city corrected their mistake and built proper, one-way cycle lanes – often as wide as car lanes – with kerbs separating them from pedestrians and motorists. Anything else, the Danes say, is a waste of time, money and effort.

“The key is to build a successful cycling infrastructure where cyclists want it, not where you as a city think you have the space,” says Louise Kielgast of Gehl Architects, a leading urban planner in Denmark and around the world.

Everyone here agrees that the eureka moment in Copenhagen’s bike revival was widespread agreement that cycling is not a goal in itself but a prioritised means to a political end: a more liveable city for all.

“We are not anti-car, we are pro-mobility,” says Klaus Bondham, head of Denmark’s Cycling Federation, founded in 1905. In his previous job, as Copenhagen’s deputy mayor for technical and environmental affairs, he oversaw crucial investment that viewed cycling as just one piece of a wider mobility puzzle.

Reviving cycling won’t work if investment is limited to the “cycle chic” hipsters, he warns. People living further from the city centre also deserve better facilities, allowing them begin their work commute by bike, continue on public transport and end on foot.

Another successful innovation has been the “Danish Cycling Embassy”, a co-operation across 25 Danish municipalities that got buy-in from various stakeholders, all with their own reasons for pushing cycling. Today, members of the group range from public health groups to business leaders who, according to a Copenhagen city survey, now save one million absentees because of sickness days annually thanks to the health benefits of cycling.

Two decades after the campaign began, more than one-third of Copenhagen’s commuters now cycle to work on dedicated lanes that near 400km. Each day they clock up 1.27 million km –the equivalent of three trips to the moon.

At regular city planning meetings, Mr Bondham says his cycling federation is viewed as an equal partner, while the car lobby has conceded defeat.

“Behind closed doors they say ‘we know we’ve lost the war over cities’,” he says. “Danish cities now belong to pedestrians, cyclists and public transport.”

For urban designer and mobility consultant Mikael Colville-Andersen, reviving cycling is as much about reshaping minds as roads. That’s what happened in the last century, he argues: a dramatic transformation of previously democratic street space into a dictatorship, where cyclists and pedestrians had to make way for the car.

The car lobby used the language of modernity and progress to push for car-friendly urban development, he says, but now he turns that language and logic on its head when presenting his solutions for car-clogged cities.

“I tell politicians their cities have to modernise and that, to do that, we need to go back to the future with bicycles,” he says. There is no cycling chicken-and-egg situation, he says, only infrastructure.

“As soon as you create a cohesive network for bicycles, people will cycle. That in turn creates safety in numbers. Getting 0-5 per cent of road users cycling is the hardest part, 5-15 per cent is a breeze.”

Colville-Andersen advised on three big cycling projects in Dublin. Only one has been implemented so far, he notes, with a design he rejected as substandard.

So why, given their similar scale, has Copenhagen succeed in reviving cycling while Dublin still struggles?

Though diplomatic of his Irish experiences, he says the huge enthusiasm he encountered for cycling projects in Dublin was hobbled in the implementation by complex, competing layers of bureaucracy.

If that can be streamlined, or sidelined, he is optimistic that Ireland can go beyond the current tipping point.

“Dublin was one of the world’s great cycling cities and it can be again,” he says.

“What happened in Copenhagen was effectively a ‘fuck it’ moment, where the city just decided to go for cycling to help people get around their city again. If there is anyone else in the world who can say, ‘f*** it’ and do this,” he says, “it’s the Irish.”