How are the over-50s keeping fit?

More older people are exercising than ever before, but there is still room for improvement 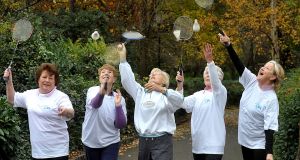 For the first time in Ireland, there is a greater number of older people taking regular physical activity than those who aren’t. A recent study found that 53 per cent of the over-50s are either highly active (26 per cent) or moderately active (27 per cent). Being physically active as we age is associated with a lower risk of chronic diseases such as heart disease and diabetes, better weight control and a greater sense of wellbeing.

The study, carried out for Age & Opportunity and Sport Ireland, found that walking is the most popular activity for the over-50s, followed by swimming and golf. There has also been an increase in the number of over-50s cycling (rising from 4 per cent to 7 per cent over three years), passing out the numbers dancing and doing weight training as a means to keeping physically fit.

“The majority of people are becoming healthier and more active simply by increasing their walking speed and making time for a regular walk every day,” says Mary Harkin, who runs the Go for Life physical activities programme at Age & Opportunity. “We can’t be complacent though as the research is clear that there are still a lot of people who feel completely excluded from sport and physical activity.

“We have seen that many people who want to take part in activities have been put off by poor experience of sport when they were younger,” she says. “They might have found too much emphasis on competitive group sports that they weren’t good at and gave up. Nowadays, there is much more choice of physical activities.”

“For example, many older people are fearful about using their local parks to walk in but if there was a community Garda on duty there every day at 3pm, they’d know it was safe to go for a walk. There could also be a lot more signposted looped walks with estimated times taken to complete the different distances.”

However, infrastructure alone isn’t always enough. So, for example, the recently installed Tone Zones in parks are often left unused. “There needs to be a training programme to show people how to use them and then a set time every week to come to use them. The social aspect of physical activity is important for some older people,” says Harkin.

The research also found that those aged between 50 and 65 were more inclined to be active than those over-65.

“People from more affluent socio-economic backgrounds were also more likely to be active . . . and older women are beginning to catch up with men on participation in sport,” says Harkin.

Age itself wasn’t found to be a barrier to taking physical activity. Instead, the survey found that people cited health issues, lack of time and motivation as the main reasons why they don’t take regular physical exercise.

“A lot of people stop doing physical activity because they have had surgery or they’ve had a family bereavement or they have moved house and can need some encouragement to get active again,” says Harkin.