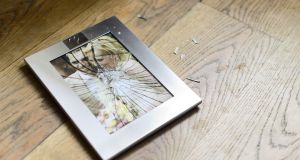 After suspecting her husband of having affairs, the wife then got a sense he was involved in a more serious extra-marital relationship. Photograph: Thinkstock

Louise had gone through a turbulent six months with her husband, during which time she felt he was always picking fights with her, before she suggested they go for marriage counselling. During the first session, he revealed he was having an affair.

“I could not believe it,” she says. They had three children under 13 at the time. Straight after that session, he rang the other woman and told her it was over.

The fact that the woman lived in the US, where Louise’s husband visited for work every year “was probably my saving grace.

I knew her name and, as time went by, knew practically everything about her. I did not know what she looked like.”

Three months later, she and her husband went on holidays together, during which there was a lot of talking and crying and they decided they would give their marriage another try.

“One thing I remember him saying was that he loved me, but that he was not in love with me. It was devastating to me. Here we were with two good jobs, three beautiful children and a marriage on the rocks.”

She found the honesty within the ongoing counselling helpful but she was still doing a lot of crying and he was very upset at what he had done.

One day eight months after the disclosure, Louise’s husband was at Mass when the phone rang in the house and then stopped. Louise picked it up and checked the number – it was the woman in the US.

“I rang her back and boy did I let her have it. I could not believe that they had been in contact again.”

At that point, Louise took control. She told her husband if he didn’t ring the woman in her presence and tell her it was over, he could move out.

“I listened to him telling her that there was nothing between him, that he was sorry for hurting her but that he was making a go of his marriage. We went to two more sessions of counselling after that and here we are today to tell the tale.

“I am stronger, better and more independent I suppose. I had to make the decision myself that I was going to forgive him and try to put the trust back into my marriage.”

Louise confided in just one person – her sister – about what was going on. And she would advise anybody who finds his or herself in a similar position, not to tell many people.

“By not telling anyone else I did not have to justify my actions to anyone,” she says. “I could make the decision without any third-party interference.”

“His lust or love for the other woman was too much. As hard as it was, I will never regret trying to work it out,” she says. I did it for the right reasons, she says, to try to keep the family together.

He had always been very controlling in the relationship, even before they were married. “But I loved him so much I assumed this would either ease in time, or I would learn to adapt.” She adapted.

“If I just accepted everything he said, then life was peaceful and the children were happy. I am not trying to make myself out to be a victim; I trotted along happy to please him which, in turn, made him happy, which made me happy.”

However, after suspecting him of having affairs, she then got a sense he was involved in a more serious extra-marital relationship.

“I followed him one evening and he was meeting up with a friend of mine, who also happened to live in the house opposite and our children played together. She was someone who I had confided in about the problems in my marriage, more fool me.”

“I learned so much about myself and where I went wrong and how to use these things about myself to go forward alone.”

While family or friends would get angry when she spoke about taking some of the blame, “it is very important not to be a victim but accept where you went wrong”, she says. “I learned that the reason he treated me as he did, from day one, was because I let him.”

Three years after their final split, Susan met her current husband and they are happily married for 16 years.

“One of the main reasons we work so well is that I went into the relationship very, very slowly, was open and completely honest with him about what I would and would not accept. We are complete equals,” she says.

Names have been changed in this piece.