High-tech ways of managing your health on the horizon

Will new technology make getting and keeping fit easier or more complicated? 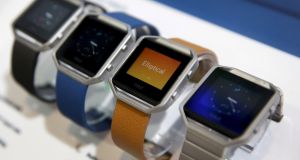 In the not-so-distant future, technology will make managing your health a lot simpler.

Your shirt could read your heart rate and respiration, monitor all your vital signs and relay that back to your doctor, who will be informed immediately if there is a problem.

Wearable sensors will alert you when your UV exposure is approaching recommended levels, almost blending in with your skin. Smart contact lenses will alert people with diabetes when their blood sugar is running low.

Your bed will monitor how long and how well you sleep, making small adjustments to help improve your night’s rest.

Meanwhile, your wearable tech will alert you when you’ve been idle too long, prompting you to get moving and burn some calories. Smart mirrors in your home could analyse your body composition without you having to stand on a scales.

If most of that sounds a little far fetched, think again. Some of this technology has been developed to the concept stage, while others are already set to be unleashed on the market this year. Most of it was on display at the Consumer Electronics Show in Las Vegas last month, the big kick-off to the year that shows you just what to expect in the coming months.

The current trend for wearable bands that monitor sleep and activity will continue for some time, according to the experts. But they are getting new and, in some cases, unneeded functions. Take the Sensaura, for example. The device claims to be able to detect your emotions in real time. If you’re prone to the odd mood swing and want to help combat it, Sensaura will tell you just what to do to sort yourself out. Or, at least what it thinks you should do. Maybe it will kick in a relaxing playlist, or suggest you take a coffee break.

But do you really need a gadget that tells you it’s time to take yourself off to the digital equivalent of the naughty step for a time out?

More useful was the new crop of wearables that are aimed at making it easier for people to track their activity.

The Withings Go is the latest from the company that brought us wearable tech you wouldn’t be embarrassed to be wear, in the form of the Activité. That was rather pricey; the Withings Go is aimed at the budget end of the market. The monitor has an e-ink display and is battery powered, so no more charging or poking about at touch screens.

Fitbit, meanwhile, is tackling the Apple Watch threat head-on. The company unveiled the Fitbit Blaze, a smartwatch that tracks your fitness. Or is it a fitness tracker that also acts as a smartwatch? Either way, it looks good, although whether it will be enough to stave off the Apple assault remains to be seen.

Those sensors will monitor everything from your heart rate and respiration to activity and sleep, feeding the information back to your smartphone. It’s intended to help you improve your fitness and overall health, and, if you’re an athlete, improve your performance.

It’s similar to Samsung’s Body Compass 2.0 clothing, with one important difference – the shirt is machine washable. But both eliminate the need to wear a separate heart rate monitor strapped to your chest, which will be welcome news to anyone who runs regularly.

The Body Compass system has one advantage though. It will also monitor if you are performing an exercise correctly, reducing the risk that you may be either wasting your time or on the fast track to an injury. Samsung’s system is still at the concept stage, however.

The Lumo Run could be another device that helps to prevent injury. The device not only measures movement but also form for runners, something that can contribute to injury. The device tucks into the lining of specially designed capri pants or shorts, and tracks while you run.

The trend for smart clothing doesn’t stop there. The OMBra has sensors that monitor everything from heart rate and pace to calorie burn. The brains of the device is housed in a removable black box that can be transferred to another OMBra.

Meanwhile, Under Armour is aiming to smarten up your feet. Remember the Nike/Apple link-up that put a small chip in the sole of your shoe? Under Armour Gemini 2 is a pair of trainers that comes with tiny sensors embedded in the shoes. They track your activity while you work out and then transfer all the data when you connect to its app.

Health tech isn’t limited to fitness. Withings, for example, has unveiled a new thermometer that can be used with your smartphone and can take temperature simply by being held to your temple for a few moments. Sure, you might say, isn’t that what a regular forehead thermometer does, minus the need for your iPhone? Yes and no. The Thermo has convenience and speed on its side. And as anyone who has tried to hold a strip on a flailing toddler’s head or shove a thermometer under their tongue will agree, that’s an important factor.

There is also a food sensor that analyses your lunch and gives its exact nutritional breakdown. Made by French startup DietSensor, the SCiO uses light to analyse your food. It’s not aimed at dieters but rather those with medical conditions such as diabetes, but it’s not a huge leap to think that it may be adopted as a weight-management tool in future.

And then you have the devices that no one really asked for or needs.

The one weakness that all this technology still has though is that people need to remember to wear or use it and, more crucially, pay attention to the results. That’s one problem that the companies haven’t yet managed to solve.

FaceTiming Pamela Anderson: Nothing can prepare you for this
8