‘Here it is more easy: I don’t feel the border between ability and disability’ 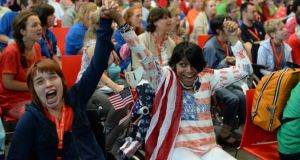 They came from Beirut, New York and everywhere in between. They arrived by bus and plane, some in wheelchairs and some with crutches. More than 500 people from 20 countries descended on Clongowes Wood College in Clane this week for the Order of Malta’s international summer camp for young people with disabilities.

“It’s a little bit like hosting the Eurovision,” said Rosemary Keogh, chief executive of the Order of Malta. “The camp has been going for 30 years now. Ireland hosted it twice before, and three years ago we offered to do it again, so here we are.”

Some 180 people aged between 18 and 25 have been taking part in the week-long camp in Co Kildare. They all have a physical or intellectual disability, and some have both. Every country team brought their own volunteers and helpers, joining 170 Irish volunteers at the college.

Activities included clay pigeon shooting, art, drama, horse-riding and archery, as well as day trips to Dublin and farther afield. But for Laurence Cosse from Brussels, the most important thing was getting to spend time with young people from around the world.

“Here it’s more easy than at home. People come up and speak to you,” she said, through an interpreter. She has cerebral palsy and uses a wheelchair, but felt she was treated differently in Ireland. “Here I do not feel the border between ability and disability. Everybody speaks to me like a normal person, not like I am handicapped. That is very different for me and I like it.”

She found Clonmacnoise a bit dull but really enjoyed going shopping and having a drink with other young women. “To be with other girls and look at the shops was very pleasant.”

Dance moves
Omar Gamel’s favourite part of the week was the disco. The young man from Amsterdam uses a wheelchair, and his friends said he wowed the ladies every night with his flashy moves on the dance floor. He gave a quick demonstration to The Irish Times, spinning his wheelchair around the floor with great alacrity.

He also enjoyed the sports tournament, where he played volleyball and a range of team events. “It’s my first time in Ireland and I like it very much,” he said. “We went to Dublin and did shopping. And we went on a boat in Athlone. It was very, very nice.” He took part in the camp last year when it was hosted by Hungary but said, “it’s better organised in Ireland”. Which was the perfect thing to say when the Irish organisers were standing beside him.

Karl Bourke (23), from near Ashbourne, Co Meath, was representing Team Ireland at the camp. He attends the Order of Malta’s training centre in Drogheda. “I liked the bow and arrow the most,” he said. “And the clay pigeon shooting. And I made friends with all the girls at the camp. I was singing on the stage too.”

Michael Phelan was his helper “and whenever I have a problem I go to him. He’s a good leader”. A nurse from Waterford, Phelan said he enjoyed the week much more than expected. “I’ve done Lourdes a couple of times but this is more fun.” While Lourdes was a pilgrimage, the summer camp had more of a holiday feel to it.“There are activities every day here and people integrate very well together.”

3,000 volunteers
He is one of more than 3,000 Order of Malta volunteers on the island of Ireland and, though based in Britain, he took holidays to come home and work at the camp.

Many people know the Order of Malta from their ambulance corps, which provides first aid at public events, but not many know it is a lay Catholic organisation. The clue is in its full title: the Sovereign Military Hospitaller Order of Saint John of Jerusalem, of Rhodes, and of Malta. It began more than 900 years ago as a monastic community inspired by St John the Baptist and ran a hospice providing care and shelter for pilgrims to Jerusalem.

This might explain why the Jesuit community was happy to hand over their prestigious private school to the camp and allow the organisers to drill holes, cut floors and instal ramps. “You wouldn’t believe the things they let us do,” said camp leader Brendan Lawlor. “They’ve been fantastic.”

It could be 15 years before Ireland hosts the event again but yesterday Rosemary Keogh was stocking up on boxes of tissues in preparation for the end of the camp today.

“People are saying there are going to be lots of tears shed at the closing ceremony,” she said. “And yes, I think they could be right.”

Caroline Crowley obituary: A great listener who ‘even saved lives’
7