Gossip can be hazardous to your health

Why do people tittle-tattle – and what can you do if you are on the receiving end? 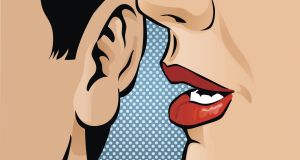 “As humans, we have a negativity bias – even though more positive than negative things usually happen to us.”

There they are, huddled in a corner of the office, heads close together, talking in low voices. They’re gossiping, of course. And it’s a very safe bet that somebody’s reputation is taking a hit.

What if that somebody is you?

When you consider gossip, I think you’ll agree it is almost always about reputation. And it usually involves hurting someone’s reputation.

Mary still won’t talk to John because of that thing he did at the Christmas party. Do you know what he did? Oh, let me tell you . . .

Michael says Sheila let the side down completely when they went to meet those bankers in London about Brexit. Did you hear what she said to them? It was terrible. Doesn’t bear repeating. She said . . .

You know the sort of thing. Back in the day, a colleague used to lean back after lunch and say to the table: “Right, whose reputation have we not shredded?”

You’re unlikely to hear the group gossiping that Sheila was fantastic at that meeting, or that John was a perfect gentleman at the Christmas party and is still enjoying the afterglow in late January.

What’s going on is more primitive, which is why it’s really not pleasant to be the target of gossip.

As humans, we give far more attention to the negative than to the positive. We have a negativity bias – even though, positive psychology researchers say, more positive than negative things usually happen to us.

However, the survival of the species depended on paying more attention to the rock that had an enemy lurking behind it to than to the many rocks with pretty flowers behind them.

So if you have a juicy bit of gossip about a colleague, I’m going to perk up and be interested.

Some research even suggests that gossip binds groups together. It makes us wary of those whose reputation has been shredded and draws us closer to those whose reputations are intact. And those who are getting the cold shoulder will have an incentive to conform: Sheila will learn not to tell those dodgy jokes in meetings. John will resolve to restrain his behaviour at parties.

Still, for all these reasons it’s terribly upsetting to learn that people are gossiping about us at work or, indeed, anywhere else. What can you do about it?

Stanford University’s Emma Seppala, whose areas of interest are compassion and altruism, addressed this recently in the Harvard Business Review (bit.ly/seppalatimes)

One suggestion is to recognise that short-term gossip is less important than your long-term behaviour. Over time, more and more colleagues will experience the real you, rather than the negative image put out by the gossips.

Another is to find out who is behind the gossip and tell them the personal pain caused by this type of talk. You might need to hold your emotions in check as you do this – don’t provide further ammunition. If you can’t find out who is spreading it around, Seppala suggests asking a friend or trusted acquaintance to defend you next time the gossip gets going.

She also suggests you recognise that chronic gossipers are acting out of their own need. If they’re not talking about you, they’ll be talking about somebody else.

It is a good thing to consider whether there is any basis for the gossip. Is there something that, actually, you reasonably need to change? If so, don’t beat yourself up about it – just take the necessary steps.

To that, I would add that while you are going through all this you should keep up the things that are good for you. That includes maintaining a social life and your various interests, eating properly and not hitting the bottle as an anaesthetic. Otherwise, you may do more harm to yourself that your “enemy” does.

And the next time you find yourself gossiping about somebody else, remember how painful it can be and put in a good word, if you can, for whoever is in the shredder this time around.

Padraig O’Morain (pomorain@yahoo.com) is accredited by the Irish Association for Counselling and Psychotherapy. His latest book is Mindfulness for Worriers. His daily mindfulness reminder is free by email. Twitter: @PadraigOMorain

Eileen Flynn: ‘As a Traveller woman, I was undermined in the maternity hospital’
8