Goodbye stethoscope: A tech breakthrough in how doctors diagnose 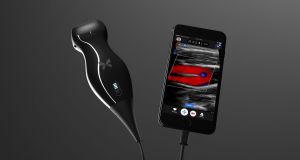 The ButterflyIQ’s unique selling point is that the ultrasound probe attaches to a smartphone, making the device highly portable.

Imagine you are in the local hospital emergency department, having earlier been found collapsed on the street. As you come around, you are surprised to find the emergency medicine consultant carrying out an ultrasound of your heart using a hand-held device.

Meanwhile a portable blood analyser is whirring away beside you, spewing out results as you watch. You have been spared an arterial needle stick in your wrist; instead your blood oxygen saturation is being measured by a probe attached to one of your fingers.

In fact, the technology for all of these point of care tests (POCTs) already exists. And there are more in the pipeline as improving technology allows for the miniaturisation of medical testing.

It is now possible to provide a rapid test result in a timely manner in the immediate vicinity of the patient such as in the Emergency Department or the Intensive Care Unit.

The rapidity of obtaining a result via POCT can increase clinical effectiveness and contribute to improved outcomes for patients. However, in many cases, to ensure that the result provided by the device is accurate and reliable, there is a need for follow-up in the form of a full radiological investigation.

The main driver behind POCT is to bring the test conveniently and immediately to the patient. This increases the likelihood that the patient and doctor will receive the results quicker, which allows for better immediate clinical management decisions to be made.

Which makes sense in the care of the patient who is an emergency and has acutely deteriorated. However the technology is not appropriate for outpatient testing or routine in-hospital investigations, where the expertise of a consultant radiologist or a laboratory specialist produces the safest and most accurate test results.

The latest point of care technology to make its way across the Atlantic to Ireland and the UK is a version of point of care ultrasound (POCUS). The ButterflyIQ’s unique selling point is that the ultrasound probe attaches to a smartphone, making the device highly portable.

Dr Cian McDermott is a consultant in Emergency Medicine and co-director of Emergency Ultrasound Education at the Mater Hospital in Dublin, Ireland. “When I’m using the Butterfly device, I’m not trying to replace what the radiologists are doing,” he says.

“Point of care ultrasound is different to radiology-based ultrasound. It is done by physicians treating patients at the bedside and interpreting and integrating the images to their care live in real time.”

When compared with a full radiological examination, the POCUS exam is limited. It is focused on answering specific questions relating to the suspected pathology and area being imaged.

But consultant radiologist at University Hospital Galway, Dr David O’Keeffe, sounds a note of caution: “When non-radiologists, for example, undertake ultrasound examination of the abdomen, it is very easy to confuse loops of bowel with gallstones,” he says.

It’s something he has seen in practice and is a reminder of the need for long periods of training in ultrasound, with an emphasis on both technique and potential pitfalls.

The benefit of ultrasound in procedural guidance is proven. When inserting central lines and performing nerve blocks, POCUS has been shown to improve success rates and decrease complication rates.

Butterfly’s ultrasound device replaces expensive transducer crystals used in larger ultrasound machines with computer chip technology. The result is a device that costs less than €2,000. This affordability could yet fill a gap in the developing world, where it is estimated some two-thirds of the world’s population has no access to medical imaging.

McDermott and his consultant colleague and co-director Dr Tomás Breslin believe the hand-held ultrasound system could replace the stethoscope for this medical generation. Whether, as some have suggested, it represents a paradigm shift in the bedside clinical diagnosis of human disease remains to be seen.

Live beside the Edge in docklands penthouse for €1.7m
9

It’s time for summery food. Here are four easy dressings that work for every salad
10