Go to bed angry – it might just save your marriage 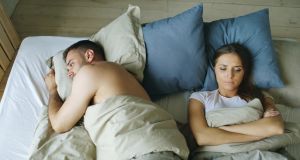 Taking a break, which could include a night’s sleep, allows each participant to calm down, to get their rational brains back in action.

Never go to bed angry. Right? Wrong. Wise as this piece of advice might seem for married couples and for people in long term relationships, it just isn’t realistic.

Consider what’s going on when people fight. As the Gottman Institute, which has done decades of good research on marriage, points out, a fight means your blood pressure is up, stress hormones such as cortisol and adrenaline are flooding your system and the logical, rational part of your brain is unable to function normally. In other words, your primitive fight-or-flight system has its fists up.

Taking a break, which could include a night’s sleep, allows each participant to calm down, to get their rational brains back in action and either to resolve the issue or agree to disagree.

About disagreeing: according to John and Julie Gottman whose research in the US has followed couples from the wedding to the grave or the divorce courts, most of the issues that vex people in marriages never get resolved. This applies to ‘successful’ and ‘unsuccessful’ marriages. So if you decide to stay up until you’ve settled the argument, you could be facing into a long night.

Gottman and colleague Christopher Dollard recently told the Washington Post, about a telling experiment. This involves intervening when couples in their laboratory are in the middle of an argument. The argument isn’t artificial. As any relationship counsellor could tell you, getting couples to fight is dead easy. It’s stopping them that’s tricky.

The Gottmans cleverly ask them to stop and read magazines while they adjust the lab equipment. This takes half an hour at the end of which the couple’s bodies are calmer – blood pressure down, reduced flow of stress hormones, physically relaxed for instance – and at the end of this time they are able to continue their discussion calmly and rationally.

Most annoyances go unresolved and we need to distinguish between the deal breakers and what we can accept, even with a certain amount of grumbling

Rather than fighting your way through the night then – and there are people who do this – the advice is to take a break when feeling overwhelmed, perhaps come back to it tomorrow.

Actually, we commonly use this method outside the marriage arena. For instance, when things get heated in industrial relations talks, one side or the other may call for a “side meeting” which involves the two parties going and sitting in separate rooms until everyone calms down.

Parents who separate two fighting children and send them to different rooms “until you learn to behave yourselves” are doing the same thing.

This is why all-night negotiations in politics and in industrial relations are stupid unless, as I suspect, the outcome has been agreed in advance and the all-nighter is just to impress the troops on either side.

Ah, how much better things would be if people never fought. Well, no. As Lisa Brookes Kift points out on the Gottman Institute website, couples who never fight may just have given up on making the relationship any better.

She quotes a somewhat sad statistic from the California Divorce Mediation Project which found that eight out of 10 couples who divorce do so because they have grown apart slowly over time. They feel unloved and unappreciated and no longer close. For these, then, blazing rows are not an issue. Instead a sad and silent crumbling of the marriage takes place over time.

The lesson from this, she writes, is that couples need to “check in with each other not only on the things that are bothering them, but also to celebrate when their partner has done something they appreciate”.

All this happens in the context in which most annoyances go unresolved and in which we need to distinguish between the deal breakers and what we can accept, even with a certain amount of grumbling.

All of this in turn means that marriage is a tricky business. The Gottman Institute website has lots of good free information which could make a difference to any marriage.

In “marriage”, I’m including long-term, unmarried partnerships also. The absence of bell, book and candle doesn’t stop these same dynamics from working.

‘If as a society we help people to die in dignity, why we do we have problems helping people live with dignity?’