From ‘Toy Story’ to you: How a Galway family are making a difference on autism 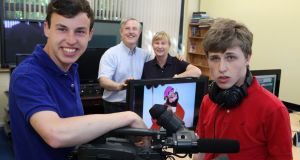 Galway twins Conor and Eoin Dodd with their parents, Enda and Valerie, in the background

Sheriff Woody Pride and the members of his Roundup gang have a lot to answer for among the millions of parents who can no longer discreetly rehome “outgrown” childhood toys.

However, when Pixar film animators and writers created the Toy Story characters more than 20 years ago, they could never have realised their wider potential for unlocking communication skills.

Galway twins Conor and Eoin Dodd (19) grew up with and fell in love with many of the productions in the Disney Pixar stable. As the first-ever computer animated feature-length picture devised by Pixar, Toy Story part one was released just two years before they were born.

The twins were diagnosed with autism, with Conor being the most severely non-verbal and unable to communicate. His particularly severe form of autism included deafness, cognitive deficits, profound language disorder and global dyspraxia.

Parents Enda and Valerie Dodd remember being told, shortly after diagnosis, that their sons would never learn a language, and that one day they would have to “drop them to an institution and drive away”. Fortunately, their father’s job with Medtronic in Galway allowed for a transfer to the US, where the couple hoped to find something that would give them hope.

“The lack of communication would result in many explosive outbursts, but I began to realise that while the child is still exploding you still have a chance,”their father recalls.

The window of opportunity was the boys’ response to animated films. Eoin might not be able to ask for a biscuit, but he could quote a substantial chunk of text from a Disney character.

While Valerie focused on physical outlets for channelling energy through sports like tennis and running, Enda began to draw on his own information technology skills and contacts. When watching animated films, their father would freeze-frame segments and match language, by labelling concepts on screen with text.

Living as they were then in Silicon Valley, California, the family were surrounded by film studios. Projects “closing out” would sell their systems and software applications. The Dodds approached Disney/Pixar and Adobe, and began to build a research team. At this point, Enda had pulled back from his career and the couple were living on some stock and funding from friends.

The Animated Language Learning (ALL) software that they devised builds on the visual learning skills which children with autism tends to have. It uses clips from the films and repetition to reinforce the concepts and emotions of characters, thereby helping them to learn to speak.

The twins were in their mid-teens when the couple decided to return home, armed with the ALL project. They enrolled the boys in secondary schools, but the inability to communicate proved frustrating for Conor – who was slowly but surely withdrawing.

One evening, Enda was working on the software when “Conor just literally grabbed the keyboard and moved in”. To his disbelief, he watched as his son continued programming the language concepts he had been engaged with.

“Conor didn’t go back to school after that, and he is now part of the research team,” Enda says, speaking at NUI Galway’s (NUIG) Business Innovation Centre as his son types away on the keyboard.

Almost overnight, the couple’s more severely autistic son moved from a world of unresponsiveness, hospitalisation, clinics and isolation to one of life on campus, while running with the Galway City Harriers, sailing and playing tennis.

His brother, Eoin, will be joining the team after he finishes the Leaving Certificate. Their parents envisage that Conor will be providing the software engineering skills, while his communicative and extrovert brother will work in the school classroom.

The NUIG campus initiative has enlisted 300 families – some 120 of them Irish-based – for the autism speech and language programme. A pilot project is also running in two Co Galway primary schools – St Pat’s in Tuam and Kilcoona.

Among the Galway participants is Rian Reynolds (10), who was diagnosed with autism at four-and-a-half. “He spends about 25 minutes a day on Toy Story, and he is learning words,” his mother, Sharon, says. “Sometimes we have to negotiate with him, but once he is in front of the screen he tends to be very engaged.”

“We had even bought him his own little table and chair to encourage him to sit down with us, but then Mickey Mouse would come on the television and he’d repeat “it’s a beautiful day” word perfectly,” he says.

“We were wondering how we could possibly build on that when we read about the research project that the Dodds were involved in, and contacted them,” Ian Connell says. “I brought Conor to meet Enda, and within 10 minutes he was able to explain his behaviour to me in a way I had never quite understood before now.

“I have to say that I find the Dodds to be an inspiration,” Connell says. “Conor is using a mouse, typing words and repeating them, and he is a lot more content and calm and the benefits are spilling over into other aspects of his life,” he says.

“I think that having this sort of access, talking to Enda, is so rewarding, as there is nothing quite like sharing your experience with other parents who have been through this,” he says.

Valerie Dodd stresses that they are not promising miracles, as there is “no one magic bullet”.

“The fact that this programme can be used at home means it is not intimidating,” she says. “And once the child has language, parenting can start,” her husband agrees.

NUIG Business Innovation Centre development manager Fiona Neary concurs, and says that the “sheer determination of the Dodd family will ensure ALL is around for a long time to come, helping families all over the globe”.

And, in Sheriff Woody Pride’s words, participants can “reach fo r the sky”.