A group of older cyclists are at large in the capital, scattering seed bombs in their wake 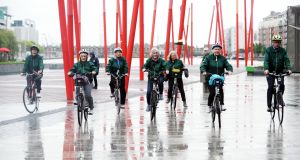 Many people of all ages find it too perilous to cycle in Dublin city centre so you have to take your helmet off to a group of older cyclists who have set up a cycling group to do exactly that.

The Bee Bandits are a self-styled “gang” of older cyclists who have come together to reclaim the streets of Dublin for older cyclists. Initiated by artists Michelle Browne and James Ó hAodha, the group was formed from older people contacted via Age & Opportunity networks.

“It’s about creating a space to just be in the city – particularly in parts of the city which mainly have younger people,” she adds. Browne and Ó hAodha helped the group develop the Bee Bandits name and logo which is emblazoned across the back of their bomber jackets. “We used the creativity of the anti-social gang culture to create new pro-social encounters so the group can hang around the city with positive intent,” explains Ó hAodha.

The Irish Times caught up with the Bee Bandits in Grand Canal Square in Dublin just before they embarked on a cycle in the Dublin Docklands. Some cyclists had their own bikes while others borrowed bikes from the Bleeper Bikes, a bike rental scheme similar to Dublin Bikes which allows members to hire bikes and lock them at any bike parking fixtures afterwards. To draw further attention to the group, Browne and Ó hAodha added flags and tassels to the bikes.

Bill Roche is one of the gang. “I usually cycle around Dublin very early on Saturday mornings when the pubs are closed, the gurriers have gone home and anyone else around is too intoxicated to cause trouble,” says Roche, who enjoys seeing the city come alive.

He joined the Bee Bandits because his wife, Joan Sugrue, encouraged him to. Sugrue says: “I joined because I found retirement hard to adjust to. I had returned to cycling and bought a new bike to commute to work a few years before I retired.” Sugrue explains that the group used the bee in their logo because they are concerned about the environment. “We plan to take seed bombs with us on our cycles and throw them in places for wildflowers to grow to help the bees.”

The group did cycle-safety training with the Dublin Cycle Safety School in the Phoenix Park before cycling in the city centre. “One of the participants hadn’t been on a bike in 40 years so the cycling training gave her confidence to cycle again,” says Browne.

Barbara Connolly from the Dublin Cycle Safety School suggests that cycling infrastructure ranges from very good to good to none at all. “The lack of joined-up cycling lanes puts anybody but the hardest off cycling in the city centre,” she says. Residents associations’ opposition to cycling lanes in some of the quieter roads is currently hindering the development of safer cycling, according to Connolly. “The Bus Connect scheme aims to facilitate cyclists but it’s not the best option for cyclists to share road space with buses,” she adds.

Margaret Hayes is another member of the Bee Bandits. “I cycled to work from Phibsborough to Dublin 4 all my life and now I cycle every week to my local active retirement group. I joined the group to meet new people. It’s very important as you age to get to know new people and get involved in new activities.”

Gabrielle McKee is a researcher on the Movage-Act European project which promotes physical activity in older adults. “Cycling is brilliant for this age group because it’s non weight-bearing and it’s something that most people were familiar with and can pick up again. Physical activity is something you have to think of like a medicine that you have to take every day.”

Further plans for the Bee Bandits include joining in charity cycles, touring community gardens and crashing local street festivals. They will also partake as a gang in the cycle parade from Dublin’s Convention Centre to St Anne’s Park in Fairview on Wednesday, June 26th, as part of the international Velo City conference.

Membership of the Bee Bandits is open to those over 50 who want to be part of the gang. For more information, email bikegangdublin@gmail.com.

Sofa to Saddle: cycling for beginners

Age & Opportunity is holding a free 10-week cycling course in Dublin for beginners or novice cyclists over 55. The Sofa to Saddle programme will start with an indoor session to learn the basic road instructions, safety and preparation for cycling in Cabra Parkside, Ratoath Road, Cabra, on Saturday, June 15th. The group will then meet each Saturday from June 22nd to August 24th at the Phoenix Park Bike Rental kiosk on Chesterfield Avenue. The aim of the course is to introduce more older people to leisure cycling, some of whom will join the Age & Opportunity team for the Great Dublin Bike Ride on Sunday, September 29th. Booking for the Sofa to Saddle programme is on 01-805 7709 or info@ageandopportunity.ie.

Mary’s story: The Magdalene laundry survivor who still lives there