So you want to do the splits? Apparently, even the stiffest people can 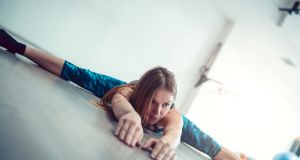 If you’ve ever harboured the desire to do the splits, this desire probably left you around age 13, eclipsed by equally brutal preoccupations like romance or acne.

But the breakout success in Japan of, Even the Stiffest People Can Do the Splits: A 4-Week Stretching Plan to Achieve Amazing Health, a book published by decluttering guru Marie Kondo’s publisher, Rodale Books, suggests that some people never give up the dream.

Written by Eiko, a yoga teacher based in Osaka, Japan, the book has you do several minutes of yoga and gentle bouncing every day for a month, at which point you’ll be able to do the splits while seated on the floor. If hygge made you drowsy, and Marie Kondo saddled you with empty cupboards and regret, “shake yoga” is a way to masochistically jiggle these bad memories away with your thighs.

The book has sold more than one million copies; Eiko’s instructional videos on YouTube have been viewed 6.7 million times. On the streets of Osaka now, schoolboys point their fingers at the Queen of Splits and scream “Hey, it’s the Queen!”

Two factors would seem to be fueling the book’s success. First, Gumby-like bendiness is not the book’s sole mandate – Eiko contends that the ancillary benefits of being able to do the splits include weight loss, improved balance, injury prevention and peace of mind.

“If your body is stiff, it becomes harder and harder to do things like walk, step over things, pick things up, sleep or even sit,” Eiko said in an email, adding that, outside of women in their 30s and 40s, the book has also been very popular with senior citizens. To back up its claims, the book cites studies from an array of sources ranging from the Journal of Applied Physiology and the Neuropsychoeconomics Conference Proceedings to The Sunday Tasmanian and Joe Weider’s Muscle & Fitness magazine.

The second component of the book’s power is less wholesome. It only takes several pages for Eiko to lay out her regimen – you do two minute-long exercises a day, one wherein you lie on your back and pull your outstretched leg forward with a towel and then bounce, and another where you do a legs-spread sumo stretch and then bounce. A third minute-long yoga position or exercise changes each week. Eiko recommends that, with any move, you push yourself to 70 percent of your capacity.

How to do the splits stretch

But the bulk of the book consists of a slightly strange short story – “How Are You Going to Achieve Anything If You Can’t Even Do the Splits?” – about two shame-ridden employees of a corporation in Japan who discover the joys and benisons of shake yoga.

The gentle Oba is being outworked and outplayed by his younger colleagues, and harried Umemoto fears her work has deteriorated because of poor time management skills and a lack of self-restraint. But Oba and Umemoto’s lives change dramatically when their new boss, Hori, encourages them to start meeting in the conference room at 7.30am, where they cover the floor with some “picnic sheets for cherry-blossom parties” and then stretch and bounce their way to a new life – the kind of life that’s led by people who can do the splits. “That sparkle you feel, that sense of respect,” as Hori puts it, “. . . is something you reserve for the kind of people who keep on trying to accomplish something that most people can’t”.

Asked why she chose to highlight professional shame and embarrassment in the short story, Eiko responded: “Whether or not you can do the splits is a battle with your own insecurities. Many of the people who buy the book have an inferiority complex because they’ve been inflexible ever since they were children. Many Japanese people have inferiority complexes about not being able to speak English or about being overweight, and lots of people feel the same way about being inflexible. For people like that, being able to do the splits means changing their ‘no-good self’ into something good.”

Whether such psychological abjection will speak to a European or American audience remains to be seen.

Eiko’s promise of being able to perform a parlor trick after a relatively small time commitment may speak to the magical thinkers in the crowd. Imagine the respect to be garnered when, after quietly stretching and vibrating for a month on your own, you slip into the bathroom during a dinner party one night, change into your yoga pants, and then are found sitting on the living room floor, folded at the waist. A hush descends.

Which is not to say that pliability is a cakewalk. Asked what percentage of people quit the program before the month is over, Eiko hazarded 30 per cent. “Many of those who give up say that their muscles ached the day after they began and they didn’t feel like stretching, so they quit.” She added, “The pain eventually goes away as you continue with the stretches and your flexibility improves.”

For people with bad backs, the prospect of doing a lot of bouncing can, at first blush, be quite daunting. However, other therapeutic forms of movement besides shake yoga, such as gyrokinesis, Feldenkrais and Sensory Bounce Therapy, include a modicum of bouncing or repeated swaying. Better yet, dance aficionados can point to two bounce-friendly dance idioms that arose as a result of bad backs.

The swirly, shaky kind of dance known as Gaga was developed by the former Batsheva Dance Company artistic director Ohad Naharin to recuperate from a back injury. The Luigi jazz technique – a series of exercises devised by a jazz dancer who was in a horrific car accident in 1946, but rehabilitated himself and went on to teach Liza Minnelli, Susan Stroman and Ben Vereen – has you fold at the waist and then put your arms between your legs while gently rocking your body.

Eiko said, “bouncing means you are always easing up before you reach the limit of how far you can stretch, so it reduces the likelihood of getting hurt”.

She also included in her email pictures of sumo wrestlers doing the seated “pancake split” that is the book’s goal. “In the national sport of sumo all the wrestlers practice straddle splits (called matawari in sumo) as an essential part of their training and as a way to prevent injury. Wrestlers are not considered full-fledged wrestlers, and are not permitted to take part in regular tournaments, until they can pancake completely.”

So, if you don’t learn to pancake for the sake of your self-esteem, or your bad back, do it for sumo.

The more the British learn about Ireland’s loyalists, the less they like
5