Equal but different: targeting healthcare by sex and gender 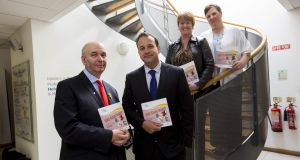 I’m at a seminar on advancing gender equality in healthcare. Words such as genderproofing services, gender-sensitive approaches and gender mainstreaming trip off the tongues of the expert panel of presenters.

But, wait a minute. I thought we were aiming to give everyone the same treatment in our public health services? Quickly, a National Women’s Council and Health Service Executive (HSE) document entitled Equal But Different is put in front of me.

This 2012 policy recommends that health-service providers and policymakers “take into account evidence of sex (biology) and gender (social roles) in the context of the broader social determinants of health”.

We know instinctively that men and women approach illness differently. Generally speaking, women are more proactive about seeking medical help – often because they come into contact with the health services due to pregnancy, childbirth and child-rearing.

Men, on the other hand, tend to ignore early signs of discomfort and seek out medical help only when they have a serious health concern.

“Male gender conditioning doesn’t encourage men to be vulnerable. Going to the doctor and saying ‘I need help’ is about feeling vulnerable,” says Alan O’Neill, from the Men’s Development Network, which worked on the Equal But Different report.

O’Neill says a lot of GP surgeries cater better for women with magazines and posters directed specifically at women. “Male GPs need to understand that men might also need a longer consultation time to inquire more deeply about their health rather than accepting brief, stoic conversations,” says O’Neill. Some men might also find it easier to have specific time slots dedicated to male patients only.

But a gender-sensitive approach must also acknowledge that social determinants of health such as poverty, disability, age and ethnicity also impact hugely on health. Many chronic diseases have far higher incidence in disadvantaged areas where poor- quality housing, unemployment and educational disadvantage contribute to high stress levels and unhealthy habits. Put bluntly, you are more likely to be less healthy and less able to look after your health if you are poor, have a disability or are from a marginalised minority group. You are also more likely to die younger.

Projects that target specific groups to improve health were outlined at the aforementioned seminar.

The We Can Quit community-based smoking-cessation programme specifically targeted women living in disadvantaged area. “We now know that more women are dying from lung cancer than breast cancer and women in deprived areas are twice as likely to smoke.

Part-time, low-paid female workers have the highest rates of smoking, so these women were targeted alongside others on medical cards.

Joanne Vance from the Irish Cancer Society described how the We Can Quit programme was based on a weekly community- based support group over 12 weeks with stop-smoking medication and flexible one-to-one support. About four out of every 10 quit smoking. “The key reasons for going back on the fags were homelessness and stress,” says Vance.

Emily Logan, chief commissioner of Irish Human Rights and Equality Commission, also spoke at the seminar. “I remember working as a paediatric nurse in the 1980s where I saw significant levels of poverty and deprivation,” she says.

Back then, we were informally encouraged to treat people differently. More recently, I’ve seen how women from the Roma community won’t engage with the healthcare system because of their fear of authority or of being questioned about how they are looking after their children.

“Yet, they trust the community teams and the public health nurse so we need to develop the primary care and community services [for these groups].”

“It’s important to realise that equality in healthcare doesn’t mean being treated the same,” adds Logan.

Gender mainstreaming: an internationally recognised approach Gender mainstreaming is an internationally recognised approach that takes into consideration the fact that men and women use and experience healthcare services differently. It has been developed through the United Nations Convention on the Elimination of Discrimination Against Women, the World Health Organisation and the Council of Europe. It is a core goal of the European Commission’s Strategy for Gender Equality (2010-2014).

In Ireland, the HSE, the Department of Health and Children, the former Women’s Health Council, the Department of Justice and Equality and the former Equality Authority developed policies and initiatives on health inequalities and gender mainstreaming. In April, the National Women’s Council called for the establishment of a gender mainstreaming unit in the department or the HSE to ensure health services are gender- proofed so that men and women across all socioeconomic groups are reached.

Cardiovascular, cancer and mental health are seen to be key areas that gender mainstreaming needs to focus on first to improve the health of men and women equally but differently. Some commentators also suggest that access to healthcare needs to be considered as a human rights issue.