Educating advocates: how patients and parents can speak for change

Patients and parents of very ill or deceased children are learning about clinical trials, pharmacoeconomics and personalised medicines to become better patient advocates 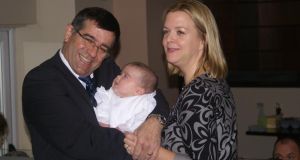 Sharon and Brian Thompson with their baby, Victoria, who died of a rare disorder when she was nine months old

On the 21st and 22nd of April, 50 laypeople from more than 20 EU countries will gather in Dublin Castle to network and study at a European Patients’ Academy (EUPATI) workshop.

Four Irish people are among the first group of patients and parents of sick or deceased children who are undertaking patient training at EUPATI. Their task is to become more informed about personalised medicine, clinical trials and pharmaco-economics through distance learning and in-person sessions held over 12 months at various European locations.

Sharon Thompson from Co Donegal is one of the students on the course. “The reason I got involved is because the condition my daughter Victoria had was so rare that the health professionals didn’t know much about it,” says Thompson, who is a primary school teacher on a career break.

Some readers will remember the Thompson family from a RTÉ television documentary broadcast in 2013 called No Time to Die. Thompson’s daughter Victoria was diagnosed with a rare leukodystrophy when she was five months old. “There was no cure and no real treatment for the strain of the condition Victoria had. Her body was unable to produce an enzyme which helps myelin production, and myelin insulates the nerves in the body. She cried constantly,” says Thompson.

When the physicians realised they couldn’t do any more for baby Victoria, Sharon and her husband, Brian, were asked to bring her home. “We were told, “Your child is dying now, so take her home.” I couldn’t get around the idea that there was nothing available for terminally ill children in Irish hospitals. We expect medical help to lead our babies into the world. Why is it so unnatural to need help at the end?” she asks.

Since Victoria’s death, Sharon says she has been on a personal journey to campaign for change. “I’m hoping that the EUPATI will give parents and patients a voice to bridge the gap between scientists and the medical profession and laypeople, so that both can become more accepting of each other.”

So far, Sharon has learned how medicines are discovered, how clinical trials proceed and how products are tested. “We need patients to understand the medical terms and push for research in some areas. In our case, Victoria’s condition was extremely rare, and she was a baby, so she was way down the list in terms of research priorities.”

Sharon firmly believes babies with life-limiting conditions should have care options other than dying at home.

“We wanted Victoria to have a safe death and not to die in pain so that we wouldn’t have any regrets. Palliative-care services are not just about end-of-life care. They are about the babies being cradled from the time they are born.”

She couldn’t have greater praise for the team at Laura Lynn and continues to be supported by the Jack & Jill Foundation. “If the Laura Lynn [foundation] didn’t exist, Victoria would have died in pain at home. We tried to take Victoria home because it is what good parents did but we had to bring her back to [hospital] . . . and then we went to the Laura Lynn Hospice ourselves.”

While there, the Thompson family had lots of opportunities to build happy memories of the short time they spent together with their baby daughter.

“I just wish everyone could experience that rather than just the despair and worry,” says Thompson.

In Donegal, Thompson is involved with a group of mothers called Our Children’s Voice, whose aim it is to develop care options for children with life-limiting conditions. “We are also looking into the cross-Border care options, because many parts of Donegal are closer to hospitals in the North.”

The European Patients’ Academy is part of the Innovative Medicines Initiative funded by the European Union’s Seventh Framework Programme and the European Federation of Pharmaceutical Industries and Associations. In Ireland, it is managed through the Irish Platform for Patients’ Organisations, Science and Industry. See ipposi.ie or tel. 01-4793273.